A healthy relationship is a relationship in which both people are able to maintain their individuality while still being committed to each other.

A healthy relationship is important for the emotional, mental, and physical well-being of both partners. They are characterized by mutual respect, trust, honesty, commitment, and empathy. A healthy relationship should be rooted in the belief that both parties deserve to be treated with kindness, dignity, and respect.

The following are some of the characteristics of a healthy relationship:

There are many types of relationships that could be considered "healthy." Each type of healthy relationship has different characteristics that make it unique. For example, a healthy romantic couple would have a strong sense of intimacy and communication with one another, while platonic friends would have an understanding of boundaries and respect for one another's personal space.

Characteristics of a Healthy Relationship

A healthy relationship is one that is mutually beneficial. It consists of two people who are both willing to compromise, communicate, and work together. There should be an understanding that the relationship will not always be perfect and that there will be disagreements.

A healthy relationship also relies on trust and communication. It is important that both parties feel like they can bring up any concerns or problems they may have without fear of being judged or ignored.

Important characteristics for platonic and romantic relationships include: 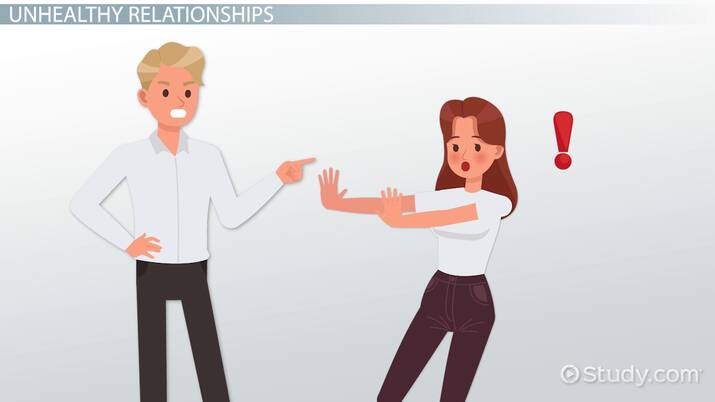 Try it now
Back
Coming up next: Love Relationships: Their Characteristics & How They Develop

Relationships can become unhealthy if one person takes on a parental role and tries to control everything that the other does. This type of controlling behavior can lead to depression and anxiety in the victim of these behaviors.

The first step in healing or exiting an unhealthy relationship is to recognize that one or more behaviors that both parties are engaging in are unhealthy.

If an unhealthy relationship is one where there is a cycle of abuse, shame, or adultery, with no remorse from the offending party, it is a good time to seek help and end the relationship.

Characteristics of an Unhealthy Relationship

There are many types of unhealthy relationships: parent and child, romantic partners, and even toxic friends.

Below are some of the major red flags that occur in unhealthy or unsafe relationships.

The 5 types of unhealthy relationships are abusive, resentful, carefree, stagnant, and enabler.

An abusive relationship is one where one person physically or emotionally abuses the other person. Abusive relationships are characterized by the abuser being verbally, psychologically, sexually, financially, or physically violent. The victim is always subjected to the abuse and is usually in fear of their partner. The abuser might be a spouse or partner, but it could also be a friend or family member. The abuser might try to control the other person by making them feel bad about themselves and limiting their independence.

A stagnant relationship is one where there is no growth or change in the relationship. It may have been this way for a long time with no intention of changing it, or it may have just reached this point recently due to lack of effort on the part of one or both partners. Either way, stagnation is harmful to the health of any relationship because it does not allow for growth and development that come from change over time.

Enabler relationships are ones where one person in the relationship is there to make up for the other's flaws. An enabler is someone who enables another person's unhealthy habits by providing them with support, money, or other resources. This might be a partner who is always there to cover for someone when they get into trouble or a parent who helps their child with their homework every night.

What are 5 signs of an unhealthy relationship?

2) They are not communicating.

3) They are not having fun together.

4) They feel like they're in a competition with each other.

5) One person is always trying to control the other person and their decisions.

What is an unhealthy relationship?

An unhealthy relationship can be defined as one that is characterized by an ongoing pattern of behavior, such as lack of communication, power imbalances, lack of mutual respect, lack of boundaries, physical abuse, verbal abuse, emotional abuse, etc.

In an unhealthy relationship, there is usually a power imbalance. One partner may have more control over the other partner and the relationship.

Buddhist Symbols & Significance | What is the Symbol of Buddhism?

What is Sociology? | Examples, Study & Themes

Duple vs. Triple Meter Overview & Examples | What is Meter Music?

Where do Counselors Work? - Settings & Their Similarities & Differences

Buddhist Symbols & Significance | What is the Symbol of Buddhism?

What is Sociology? | Examples, Study & Themes

Duple vs. Triple Meter Overview & Examples | What is Meter Music?

Where do Counselors Work? - Settings & Their Similarities & Differences