What is a Hemiola in Music?

Discussions of the hemiola rhythmic device are often complex and contain multiple descriptions and musical implications. Regardless of the specific hemiola definition, the basic function remains the same. Hemiolas are a pattern of grouped accents or rhythmic subdivisions that change the implied pulse or create a secondary rhythmic pattern. Hemiolas typically refer to a rhythmic coupling that occurs in a predictable, repeating way and usually involves ratios of rhythmic pulses such as 3 against 2 beats.

Often, the term ''hemiola'' and ''polyrhythm'' are used interchangeably. A polyrhythm, however, refers to a specific composition device that involves performing two independent rhythmic patterns simultaneously. Polyrhythms, unlike hemiolas, can involve any type of rhythmic pattern, as long as it is performed with a completely unique pattern simultaneously. Hemiolas can occur in a polyrhythmic setting, but they are not the same in form or function.

Hemiolas can also refer to the shifting of rhythmic grouping from one meter to another, such as combining pulses into groups of three when the meter implies two or placing the accent on every third pulse instead of every two when it is expected to be a group of two. For example, the ''Unnamed Rhythm'' as it is nicknamed in music circles, is a rhythmic pattern of 3+3+3+3+4, which simply refers to the pattern in which the accents are placed. In both instances, the term ''hemiola'' is appropriate. 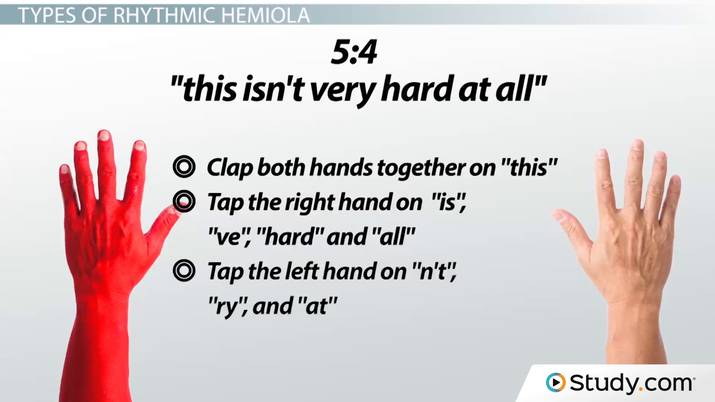 Coming up next: Legato: Definition & Technique

Hemiola patterns are labeled by their rhythmic ratios. Much like pitch frequency and its ability to double and create the same pitch at a perfect octave higher, certain ratios of rhythmic coupling create hemiola patterns found at predictable intervals, such as 3 against 2 (3:2), 4 against 3 (4:3), and 5 against 4 (5:4). Ratios of frequency, like what is heard on a string instrument at half its length of the string, are similar to the melodic hemiola. In terms of contrasting sounds, a melodic hemiola is also the sound difference between two strings that cause a perfect 5th interval. An older term for this phenomenon called ''hemiolia'' (''hemi'' for half and ''holosor'' for whole), implied the ratio of 3:2, or the interval of a perfect fifth. This is an infrequently referenced term now but laid the foundation for what the hemiola represents today.

The rhythmic hemiola is the hemiola type that is most often used and referred in modern music, and the type that groups rhythms in unequal patterns. There are two basic forms of rhythmic hemiola. The vertical hemiola is defined by two independent lines of rhythm that have contrasting pulse groupings, and an unequal subdivision of the beat between each line. A three-beat pattern playing against a two-beat pattern in a different voice is considered a vertical hemiola. The horizontal hemiola is an unequal subdivision of the beat against the time signature. It is a composition method of changing the accented parts of the beat from where it is implied by the written time signature, or of transitioning from one pulse grouping to another by way of time signature change while keeping the groups consistent. For example, changing from two groups of three to three groups of two, and changing the accented pulses to match the groupings is a common form of a horizontal hemiola.

In vertical hemiolas, the rhythmic ratio is the number of beats in one line against the number of beats in a secondary line. In a horizontal hemiola, the ratio refers to the meter versus the implied number of beats within the rhythmic pattern. The most common hemiola grouping involves the 3 against 2 pattern, which is often seen when changing from a compound time signature or rhythmic meter like 6/8 to a simple time signature like 3/4. Compound meter contains a rhythmic division of three pulses on each beat, versus simple meter which contains only two pulses in each beat. In 6/8, there are two large beats with three pulses each. In 3/ 4 time, there are three large beats with two pulses each. Although each meter contains the same amount of pulses (sometimes called quavers), the groupings are different between compound and simple meters.

In the 3 against 2 hemiola, 3 pulses are spaced evenly against 2 pulses of equidistance. If clapping this rhythm with the left and right hand on a flat surface, the left hand would clap a dotted quarter note (with three quavers) while the right hand would clap a quarter note (with two quavers). The two separate rhythms will not align again until the pattern repeats, even though they begin at the same time. When performed at the same time, the two rhythmic lines create a ''composite rhythm'' that is perceived by the listener. This composite rhythm is often represented by the English mnemonic device ''nice cup of tea.''

In the 4 against 3 hemiola, 4 pulses are spaced evenly against 3 pulses of equidistance. Unlike the 3:2 pattern with an underlying subdivision of eighth notes (quavers), the 4:3 hemiola has an underlying subdivision of sixteenth notes (semiquavers). When clapped, the left hand would perform four dotted eighth notes (with 3 semi-quavers each) while the right hand would clap 3 quarter notes (with 4 semi-quavers each). The composite rhythm is often represented by the mnemonic ''pass the bread and butter.''

The 5 against 4 pattern is a much more rhythmically complex hemiola than the 3:2 or 4:3 pattern. Essentially, it is a 20-count pattern with accents on every 4th beat of the composite rhythm. The composite rhythm is often represented by the mnemonic device ''This isn't very hard at all''.

While hemiolas are studied frequently in Western music spaces, the rhythmic device can be found in different musical traditions around the world, and through many centuries and style periods. Settings in which a hemiola example can occur include:

Hemiolas are a type of grouped accents or rhythmic subdivisions that change the implied pulse or create secondary rhythms. The term hemiola can refer to two different musical elements: rhythmic hemiolas(the most commonly reference hemiola that groups rhythms into unequal patterns) and melodic hemiolas (the sonic difference between two strings that cause a perfect 5th interval to occur). There are two types of rhythmic hemiolas. A horizontal hemiola is an unequal subdivision of the beat against the implied time signature. A vertical hemiola is an unequal subdivision of the beat between two separate rhythm parts. Hemiolas can be found in a variety of music, including early classical music like French Baroque music and the music of Brahms, Cuban and Latin Rhythms, and African and Middle Eastern music.

What is a famous example of a hemiola?

One of the most famous examples of a hemiola in pop culture is the tune ''America'' from West Side Story by Leonard Bernstein. This tune features contrasting measures of 3 against 2 rhythms, which is a very characteristic hemiola of Latin American music.

What is a hemiola rhythm?

A hemiola rhythm is a rhythmic device that groups pulses into unequal patterns, especially against the implied meter or time signature. Rhythmic hemiola patterns such as the 3 against two pattern contrast groups of two pulses with groups of three pulses, creating a groove that feels unexpected.

Create an account
Hemiola Rhythm & Examples | What is Hemiola in Music?
Start today. Try it now
Music 101: Help and Review

Tutti vs. Solo in Music Theory

Coda Overview & Symbol | What is a Coda?