Devin Eichlin, John Williams
Understand hemolymph through definition. Explore its functions and importance, the method of transport in invertebrates, and why it's necessary for their survival. Updated: 03/03/2022

Open circulatory systems, unlike closed circulatory systems, lack structured blood vessels (veins and arteries) and blood, and instead possess a fluid called hemolymph that flows freely throughout the body and is stored in a central body cavity called a hemocoel. What is hemolymph? Hemolymph definition is a complex circulatory fluid found in the open circulatory systems of invertebrates that serves similar roles to lymph fluid and blood in vertebrate species. Although often compared to each other, blood and hemolymph differ in both their function and composition. Hemolymph's makeup is dissimilar to blood as it does not contain any red blood cells (erythrocytes) and is composed mostly of water.

Unlike blood, hemolymph does not contain red blood cells or hemoglobin which results in hemolymph not possessing a red color but rather a clear or slightly yellow or green pigment. Instead, the hemolymph of many organisms contains hemocyanin, a free-floating protein that binds to and transports oxygen to surrounding cells and tissues. Hemolymph can also contain specialized hemocyte cells that help protect the organism from invading pathogens. 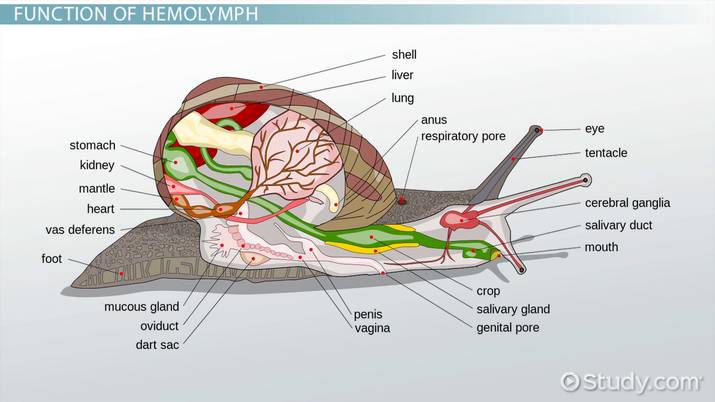 Try it now
Back
Coming up next: What are Arteries? - Function & Definition

Hemolymph tissue is a complex fluid that is responsible for transporting nutrients and molecules around the body and removing waste. Vertebrates possess many specialized fluids, such as blood and lymph, to divide up these roles, however, in invertebrates it is up to hemolymph to perform all of these vital functions.

In blood, hemoglobin molecules are responsible for binding to oxygen molecules to transport them to different tissues around the body. Instead of hemoglobin, some invertebrates with open circulatory systems have hemocyanin, a similarly functioning molecule. Hemocyanin is a copper-containing protein found free-floating in hemolymph that binds to oxygen and moves it to cells and tissues throughout the body. This is in contrast to hemoglobin, which is an iron-containing protein that is bound to red blood cells in vertebrates. Hemocyanin is colorless but turns blue once bound to oxygen molecules.

It is important to note that not all invertebrates have hemocyanin; hemocyanin is primarily found in arthropods and mollusks but is absent in many insect species. Many insects have a tracheal system that delivers oxygen from the air directly to their organs and therefore do not need a specialized protein to transport oxygen. Other invertebrates may possess hemoglobin instead of hemocyanin.

Lymph fluid in vertebrates functions as part of the lymphatic and immune system and works to balance fluid levels throughout the body and transport white blood cells around the body. In invertebrates, hemolymph functions as water and chemical storage and increases desiccation resistance in some species. Hemolymph tissue also contains hemocyte cells that are vital to the immune response of invertebrates. These hemocyte cells protect the body by phagocytizing, or engulfing invading bacteria or viruses and removing them from the body.

So how exactly does the hemolymph transport all of these materials around the body? Even though species with open circulatory systems lack structured vessels, many species still possess hearts that work to pump hemolymph throughout different branches of the hemocoel. The hemocoel extends throughout most of an organism's body and in the extended branches molecules and nutrients are exchanged between the hemolymph to neighboring tissues. Honey bees have a heart with a single aorta containing many small holes in it that runs down the length of the insect. This aorta pumps hemolymph out of the heart and into the hemocoel chambers causing the hemolymph to flow through the body, coming in contact with various organs and exchanging nutrients before flowing back to the heart and starting the cycle again.

Open circulatory systems and hemolymph do have some advantages, such as requiring less energy to move throughout the body; this makes it optimum for animals with slow metabolisms and smaller sizes. This system is also ideal for insects that already have tracheal systems to deliver and transport oxygen and do not need specialized vessels.

Water makes up the bulk of hemolymph, but hemolymph also contains proteins, carbohydrates, lipids, and other cells. Hemocytes are specialized immune cells that are found in hemolymph. These cells engulf invading pathogens and protect the organism. In some organisms, the hemolymph also contains a protein called hemocyanin. Hemocyanin is similar to hemoglobin in that it binds to oxygen and moves it around the body. However, unlike hemoglobin which is bound to red blood cells, hemocyanin is free-floating. In organisms with open circulatory systems, hemolymph acts as both their circulatory system fluid and their lymphatic system fluid. Although less efficient at transporting molecules than closed systems, open circulatory systems require less energy and are ideal in insect species that do not need oxygen transport due to their complex tracheal systems.

What animals have hemolymph?

What is hemolymph and its function?

Hemolymph is a fluid tissue found in organisms with open circulatory systems. Hemolymph contains proteins, carbohydrates, lipids, and ions but is mostly made of water. Hemolymph functions to transport these molecules and nutrients around the body as well as to remove waste.

What is the difference between blood and hemolymph?

Blood is used in closed circulatory systems of vertebrate species while hemolymph is found in open circulatory systems of invertebrates. Hemolymph and blood vary greatly in their composition and function. While blood's main purpose is to transport oxygen around the body, hemolymph combines the functions of both blood and lymph fluid, transporting not only oxygen but other molecules and nutrients as well.

How Do Ticks & Mites Differ?

How Do Ticks & Mites Differ?