Copyright
Eleanor Doughton, Vericia Miller, Lesley Chapel
Explore hit and run car accidents, laws, and penalties. Discover what a hit and run is and the criminal, civil, and administrative consequences of a hit and run. Updated: 06/29/2022

Hit and run car accidents are almost exactly what they sound like; however, there are greater legal implications than most people are aware of.

To first establish a general idea of what a hit and run accident is, imagine this scenario: A young man is driving back home from the grocery store; his family is having a party, and his parents asked him to run out to the store for some last-minute items. As his car winds through the streets of his neighborhood, he gets a text message from his parents asking him to turn around and go back to the store. They completely forgot to get napkins! He takes a quick glance around, and seeing the street empty, looks down to type a quick response before turning around. By choosing to text back, he doesn't see a man on a bicycle leaving the street he's about to make a U-turn on; he hits the brakes, but too late. Panicking, he speeds away from the injured man. This would be an example of a hit and run accident.

Hit and run accidents refer to one in which a driver leaves the scene without stopping to provide contact information or being cleared to leave by authorities. There are two important components to a hit and run car accident:

Some other examples of hit and run accidents include hitting and denting the door of a parked car and then leaving the scene, or a drunk driver driving away from an accident that they caused.

Hit and run accidents can be terrifying situations, especially for newer drivers. When accidents occur, it is important to first stop and react as calmly as possible. Every state in the United States requires drivers to provide contact and insurance information to the others involved in the accident. Damage to vehicles and the property and/or persons involved in the accident should be assessed. Someone should call 911 for the appropriate assistance from the authorities, especially if anyone is injured. 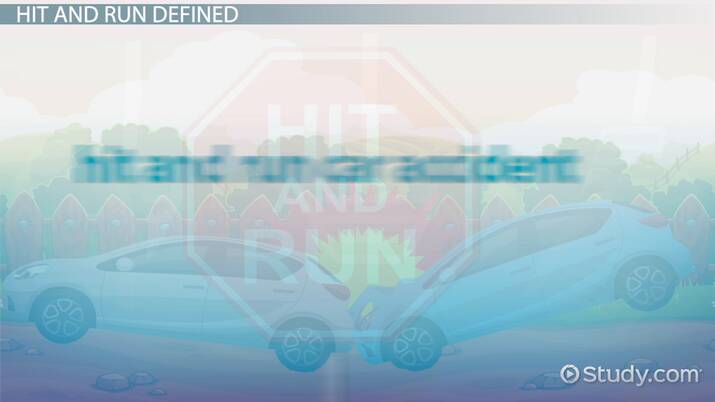 Try it now
Back
Coming up next: Non-Obviousness & Inventive Step in Patent Law: Definitions & Examples

Hit and run car accidents are serious crimes. There are numerous factors surrounding these accidents, such as the severity of the damages caused in the accidents. Car accidents are reckless in nature, and there are laws in place to implement penalties on the driver that caused the accident: these are criminal penalties, civil penalties, and administrative penalties. However, when the driver chooses to leave the scene illegally, penalties can be much higher. Penalties also increase in relation to the damage caused, and when people are injured as opposed to just property damage.

Criminal penalties vary from state to state and can either be classified as a felony or misdemeanor. For example, Pennsylvania law states that any driver that causes an accident in which there is damage only to a vehicle or property shall be fined $2,500, or face imprisonment for up to a year, or both.

Most states define hit and run felonies as leaving the scene of an accident where injury has been caused to a person. On the other hand, misdemeanors are typically property related, such as a car hitting another car. When it comes to imposing penalties for felonies and misdemeanors, there are numerous factors that can impact the scale of the penalty. Factors such as criminal records, driving records, and the severity of the damages and/or injuries caused can raise fines and/or incarceration sentences.

Civil penalties may result if the other person involved in the hit and run accident decides to sue for the damages they suffered. The two types of civil penalties that may result in this scenario are punitive damages and treble damages.

Punitive damages are awarded to the plaintiff (the injured person) as a punishment for a defendant's (hit and run driver) dangerous behavior.

Treble damages are awarded to the plaintiff to compensate them for the damages that they have suffered. This can cover anything from property damages to wages lost from an inability to work due to the accident to medical bills for injuries sustained.

Administrative penalties are imposed by a state's Department of Motor Vehicles, or DMV. These penalties are related to an individual's driver's license. Any conviction for a hit and run accident can result in suspension or revocation of a driver's license, the duration of which depends on the state where the crime was committed. It is also important to understand that many insurance companies can cancel an automobile insurance policy if someone commits a hit and run.

Variation in Penalties Based on Country

Similar to how penalties for hit and run accidents vary by state, there are also many differences between countries. For example, in Ontario, Canada, anyone found guilty of a hit and run offense will be subjected to a fine of $1,000 for a first offense, imprisonment for 30 days for a second offense, and imprisonment of 120 days for each subsequent offense. In India, hit and run penalties can involve 6 months of imprisonment and a fine of 1,000 rupees. If alcohol and drunk driving is involved in these accidents, the driver can face up to 2 years imprisonment.

In the United Kingdom, penalties for hit and run accidents can include: 5 - 10 penalty points on your license, a monetary fine up to 5,000 pounds, and a potential prison sentence of up to 6 months. South Korean law states that anyone who commits a "traffic accident" resulting in death or injury of an individual can face penalties of imprisonment without prison labor for a maximum of five years, or by a maximum fine of 20,000,000 won.

A hit and run car accident is one in which a driver collides their vehicle into another person or property, and then leave the scene without providing contact or insurance information. Depending on the state, or country for that matter, the penalties a driver can face vary; there can be a combination of criminal penalties (misdemeanor or felony depending on the severity, which might include jail time or fines), civil penalties (lawsuits), and administrative penalties (suspension or revocation of driver's license by the DMV). The scale of the damages caused in the accident and previous driving and criminal records can increase fines, imprisonment sentences, and license suspensions. When accidents occur, it is important to stop, remain calm, assess the damage caused, and call the authorities for help as needed.

Write an essay of approximately three to four paragraphs that explains what a hit and run car accident is and what two components must be met in order for it to be considered a hit and run under the law. Also explain what makes a hit and run a misdemeanor and what qualifies one as a felony.

Example: If only property is involved and there are no human injuries, a hit and run car accident is usually considered a misdemeanor.

In approximately two to three paragraphs, write an essay that describes why hit and run car accidents are considered to be so serious.

Example: Leaving the scene of an accident is considered a reckless act that could endanger the lives of more people.

Choose a specific state and research what the penalties are for hit and run accidents in that state. Make a chart, poster, or some other type of graphic organizer that lists and briefly describes these penalties.

Example: The penalty for felony hit and run in Nevada can be 20 years in prison.

Create an informational brochure that describes what people should do to avoid hit and run accidents. In other words, make a brochure that details the proper course of action to take immediately upon hitting another motorized vehicle or pedestrian.

Example: If someone hits another car on the road, they should stop, safely exit their vehicle, and see if the victim is injured.

What is the punishment for hit and run in India?

In India, hit and run penalties can involve 6 months of imprisonment and a fine of 1,000 rupees. If alcohol and drunk driving is involved in these accidents, the driver can face up to 2 years imprisonment.

Is hit and run a criminal offense in Canada?

Yes, hit and run accidents are a criminal offense under the Federal Criminal Code and the Ontario Highway Traffic Act.

What is the penalty for hit and run in Ontario?

A person charged with a hit and run offense in Ontario, Canada will be subjected to a fine of $1,000 for a first offense, imprisonment for 30 days for a second offense, and imprisonment of 120 days for each subsequent offense.

Misfeasance Concept & Examples | What is Misfeasance?

Hit and Run: Laws & Penalty | What is a Hit and Run?
Related Study Materials

Misfeasance Concept & Examples | What is Misfeasance?