The United States Constitution was adopted by Unanimous Consent of the Delegates to the Constitutional Convention on September 17, 1787. The Constitution was ratified on June 21, 1788, when New Hampshire was the ninth state to ratify it. After ratification, the first elections were set for a period running from December 15, 1788, to January 10, 1789, and the new federal government would begin under the new Constitution on March 4, 1789. The Constitution provided for a Legislative Branch, an Executive Branch, and a Judicial Branch representing what the Founders saw as the three functions of government; making laws, enforcing or executing laws, and interpreting laws. 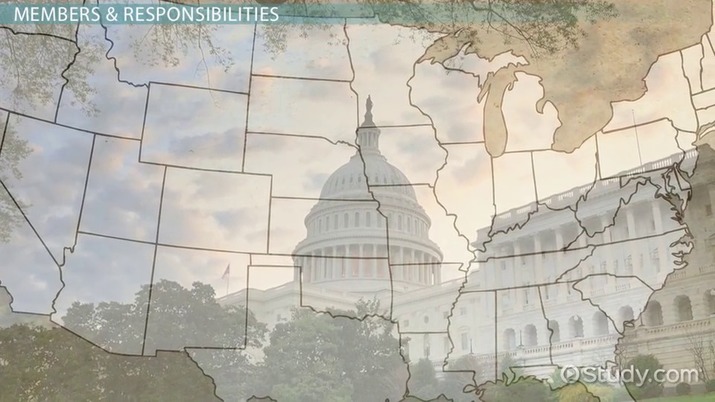 Coming up next: Presidential System of Government: Roles of the President

The House of Representatives

The Constitution established that Representatives would be elected every two years in even-numbered years by the ''People of the State.''

The Election Process and Term of Office

Representatives serve two-year terms. Senators serve six-year terms. Why the difference? The Founders considered the House of Representatives to be the People's House. Representatives were elected by the people, while Senators were elected by several State Legislatures. (The 17th Amendment later established the direct election of Senators). Because the Founders were apprehensive about the passions of ''factions,'' groups of citizens inflamed by some or other temporary issue, the Senate was to be the Representative of their State and thereby able to be more dispassionate, while House members would be directly influenced by their voters. Basically, the purpose of the House of Representatives was to represent citizens, the purpose of Senators to represent States.

While the Constitution sets the term of office at two years, it left the election process itself to each state. In all states, candidates must file to run for office by a certain date prescribed by state law. The state also sets the date for a primary and a general election. The purpose of the primary election is to choose the candidate from each party who will run for the office in the general election. Because U.S. Congressional elections, like other federal and state elections, are primarily funded through private means, new Members of Congress have stated that their orientation session included instructions to begin fundraising for their election on their first day in office. If there is a vacancy in the House of Representatives, the Governor of that State will appoint a Representative to serve until the next election.

There is one Representative in the House of Representatives for each of the United States territories: Guam, Puerto Rico (called a Resident Commissioner), American Samoa, the U.S. Virgin Islands, and the Northern Mariana Islands, and one Representative for the District of Columbia. These members have floor privileges, meaning they can debate issues, introduce bills, serve on committees in which they have a vote, but they cannot vote on proposed legislation before the full House.

There are only two responsibilities for the House of Representatives explicitly described in the Constitution.

Any House member may introduce a bill, which is a proposed piece of legislation meant to accomplish some purpose. The process, in simplified form, follows the following steps.

They may vote in one of three ways.

What is the definition of the House of Representatives?

What is the difference between the Senate and the House of Representatives?

A member of the House of Representatives is considered to be the direct representative of the people of her or his district. The Senate, made up of two Senators from each state, and originally elected by the state legislature (although since the 17th Amendment elected by popular vote) is considered to represent the States rather than people. Today, however, that difference is blurred, and the major difference between the House and the Senate are their rules of conduct and the fact the Representatives serve two year terms and Senator six year terms.

How long is a term in the House of Representatives?

The term of a Representative in Congress in two years. The reasoning behind the relatively short term of office compared to the Senate is to allow citizens to hold their Representative accountable every two years for fulfilling their promises.

What happens in the House of Representatives?

The House of Representatives has two basic functions.

The British Parliament: House of Lords & House of Commons

The Roles & Powers of the Prime Minister & the Cabinet

Federalism Significance & Examples | What is Federalism?

Political Systems & Structure of the U.S. vs. Great Britain

What is Government? - Definition, Role & Functions