What is Electron Configuration?

Each atom is unique and has a set number of protons. This is called the atomic number. Each proton is balanced out by the opposite charge of an electron. But unlike protons, electrons do not inhabit the nucleus, rather they orbit around the protons and neutrons in specific patterns. Those patterns are then expressed by the electron configuration. Electron configuration is a numerical expression of a 3D space around an atom's nucleus. 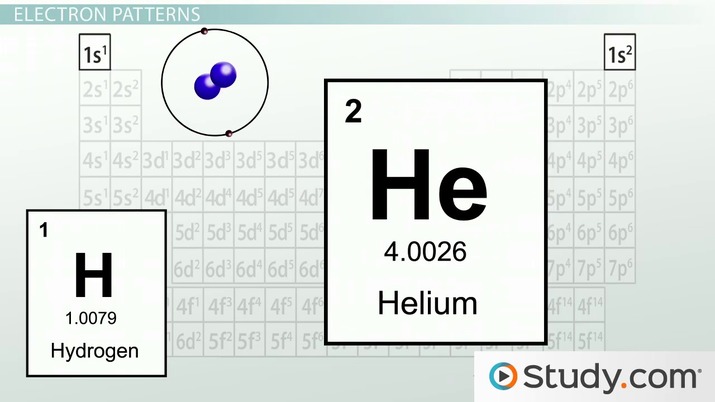 How Are Electrons Arranged in an Atom?

The Bohr model of the atom has the electrons orbiting around the nucleus like planets around the sun. This is a simplistic and flawed model of the quantum world. Electrons occupy a three-dimensional space around the atom, forming an "electron cloud" as opposed to a straight orbit. However, the Bohr model is still a good way to illustrate the atom and its parts. Electrons occupy orbitals or areas around the nucleus. Electrons can give off and absorb "specific" amounts of energy, or quanta (thus the birth of quantum mechanics) to move from one orbit to another. All the orbitals are layered around an atom, giving each orbital area a unique energy level, direction of spin, shape, and size.

The letter n denotes what energy level the electron inhabits. Any nonzero integer is a possible value for n= 1, 2, 3, and so on. This denotes the shell the electron is in. Any element in row 1 will have electrons with the principal quantum number n=1. Row two elements have n=2, row three n=3, row four n=4, all the way to seven. Theoretically, there could be n=113, but that would require elements filling up all the previous n values.

Angular momentum is a fancy way of describing the space an electron could occupy. If n is any nonzero integer, then its orbital angular momentum is signified by l=0 to n-1. The possible values for l are 0, 1, 2, etc. to infinity. The integers 0, 1, 2, and 3 indicate what subshell the electron is found in. s levels are denoted 0, p levels are 1, d levels are 2, and f levels are 3. For example, helium is in the first row, so n=1 and l=0. The s sublevel has one orbital. Every subshell orbital can hold a maximum of two electrons. These "shells" as they are called, are areas where the electron is most likely to be found, not a definite location. The s sublevel looks like a sphere, the p sublevel looks like two balloons tied together at the ends, the d sublevel is a combination of lobes and donuts, and f is a complicated multilobed balloon sculpture surrounding the nucleus.

Electrons all have the same negative charge. The spin of each electron in a subshell will be opposite to the other. This is denoted as +1/2 or {eq}\uparrow {/eq} or -1/2 or {eq}\downarrow {/eq}. Unlike l which is dependent on n, or {eq}m_l {/eq} which is dependent on l, {eq}m_s {/eq} is not dependent on any other quantum number. The electron spin is either up or down, one of each in each subshell. The significance of the electron spin determines if the atom can generate a magnetic field.

Since electrons are physical things, they inhabit a physical place. These places, or shells, can be likened to a house. Each atom has its own "house" and the electrons of that atom occupy the rooms in this "house." How can the number of electrons an atom can hold be determined? That is where the quantum numbers come in.

If n=1, there is one floor or level. If n=1, then l=0, and 0 corresponds to sublevel s. The s sublevel is the simplest and the smallest, forming a spherical electron cloud around the nucleus. If one looks at the periodic table, one will see only two elements in row one. That is because there is only one sublevel in row one, only able to hold two electrons, one for hydrogen and two for helium. The four quantum numbers (n, l, {eq}m_l {/eq}, {eq}m_s {/eq}) for hydrogen's electron are (1,0,0,+1/2). Since helium has two electrons, their quantum numbers will be (1,0,0,+1/2) and (1,0,0,-1/2)

when n=2, then l= 0 and 1. In row two of the periodic table, there are two orbitals, 0=s, and 1=p. P sublevels can hold six electrons. Boron is the first element to have electrons that are a sublevel other than s. It has five electrons, so one is in a sublevel or subshell p. Let's write out all the atomic numbers for boron's five electrons:

Take a look at the last set of quantum numbers. This time the value for the magnetic number is -1. This number is dependent on l, and can be -1,0,1. Thus, p subshells can have six electrons. It has three orbitals, each holding two electrons. The {eq}m_l {/eq} can be chosen at random when there is only one electron to contend with in a particular orbital.

The electron configuration pattern is discernable when looking at a periodic table. The n=3 shell, or 3rd row, has 3s and 2p sublevels. Electrons will always fill sublevels according to the lowest energy first. There are some other rules that electrons generally follow as well.

Just because electrons are home alone does not mean they do not follow the rules. There are rules for everything, this is physics.

The Pauli Exclusion Principle states that the two electrons in an orbital have to have opposite spins and different quantum numbers. One will always be spin up (+1/2) and one will be spin down (-1/2). There are two ways of writing this out, one way is with the quantum numbers, and the other is the "box and arrow" method.

Hund's Rule states that in sublevels with multiple orbitals (p, d, and f) each orbital will get one electron before they pair up. Using these rules, the electron configuration of any element can be theorized. Look at the box and arrow diagram for oxygen. There are electrons in all three p sublevels instead of two in l=-1 and l=0. The first three electrons will spread out, due to their like charge. The fourth electron will then fill in after.

How to Do Electron Configuration

Write out the electron configuration for the following elements: Al and Sb

This last method is a good visual for figuring out the electron placement using the Pauli Exclusion Principle and Hund's Rule.

Just as in life, there are exceptions to every rule in chemistry. Some larger elements fill subshells a little differently than most. For example, Cr or chromium. It is a transitional metal in the fourth-row d block. The expected electron configuration would be {eq}(Ar)4s^23d^4 {/eq}. However, because the repulsion force between electrons is more than the energy jump from 4s to 3d, chromium's electron configuration is {eq}(Ar)4s^13d^5 {/eq}. This allows all electrons to be in their own orbitals and none of them have to share. This keeps the repulsion force to a minimum.

The whole point of understanding electron configuration is to understand the nature of the atom. Since electrons are the outermost portion or part of an atom, they are involved heavily with the interactions between atoms. Will an atom bond ionically, covalently, or not at all? How will the element react in the presence of other atoms, molecules, compounds? When a new element is discovered, what known elements have the same physical and chemical properties? All these questions and more can be answered by knowing the electron configuration. Helium and its fellow noble gases will not participate in bonds because they have full electron configurations. Notice where they are on the periodic table. Metals and transition metals with d and f block valence electrons are predictable in their physical properties because of their electron configurations: metallic looking, shiny, solid at room temperature. Even the ones that are exceptions, like nickel and iron, give clues to how they act (magnets anyone?) because of their funky electron configurations.

Electrons are a very small part of the atom's mass but play a big role in determining how the element will act. Electrons orbit the nucleus in electron shells or areas of probability. The expression of where those electrons are found is called electron configuration. Each electron can be described with the use of quantum numbers.

Filling electron orbitals comes with a set of rules.

The first two columns on the left side of the periodic table are the s-block elements. The middle section up to group 12 is the d-block. The remaining groups comprise the p-block elements except for helium. It is in the s-block. We won't work with the f-block, which are the bottom two rows that are separated from the main two groups.

The rows tell us what energy level the electron is in. The group number within the block tells us how many electrons are in that subshell. We'll start at the element we are working with and work backward.

How many electrons are in each energy level?

What are the 4 energy levels?

How do you write the electron configuration of an element?

Electron configuration takes the total number of electrons and assigns them specified positions around the atom. Electron shells will fill in a certain order until all electrons have positions, starting with 1s, then 2s, then 2p, then 3s, 3p, 4s, 4d, 4p, and so on.