The solution is written:

This solution is read: X is equal to or greater than 7 OR x is less than or equal to -7 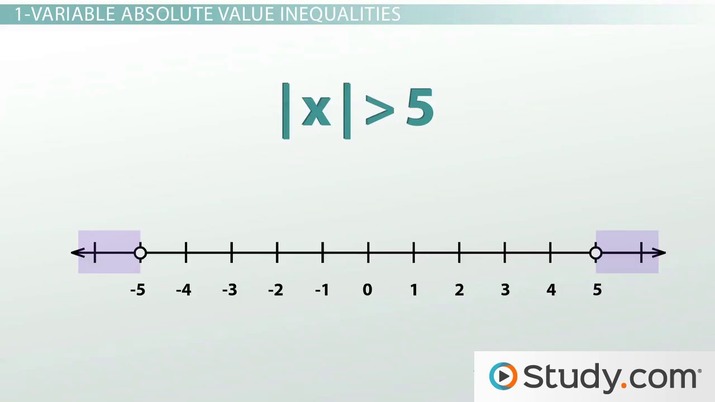 When solving absolute value inequalities there are some important rules to remember:

Use these steps to solve absolute value inequalities:

Solving for the positive option:

Flip the inequality symbol and solve for the negative option:

This is a 'less than' absolute inequality so the solution will be an 'and' complex inequality. The values that make the inequality true must satisfy both conditions: they must be greater than the negative value AND less than the positive value. This type of inequality is written with the argument of the absolute value in the middle of the negative and positive options like this:

Use inverse operations to solve for x:

Here is one more example:

In this case, when the absolute value expression is isolated, it is less than a negative value. Since absolute values are always positive, this inequality has no solution

Graphing the solution to an absolute value inequality helps to make sense of the solution.

The solution to one variable inequalities like the examples above can be shown on the the number line.

Inequalities with two variables can be solved efficiently with graphing. Consider the graphs of the one variable inequalities on the number line. Introducing a second variable transforms the graphs into two dimensional regions instead of one dimensional rays or segments. The first step to solving these inequalities is to graph the boundary of the solution region. This is done by graphing the equation of the inequality.

Given the two-variable absolute inequality:

For 'greater than' inequalities, the area above the line is shaded as shown in the following example:

How do you solve absolute value inequalities?

Solve two variable absolute value inequalities by graphing them. Graph the corresponding absolute value equation. Use a solid line if the inequality includes 'or equal to' or a broken line if it does not. Shade in the appropriate area above or below the line.

How does an absolute value symbol affect an inequality?

How Do I Use a System of Equations?

What is the Pythagorean Theorem? | Examples & Method