Copyright
Anne Kamiya, Betsy Chesnutt
Learn about the human body's anatomy and the major body systems. Study the body systems, as well as the many organs in the body and their specific functions. Updated: 04/10/2022

Understanding the Anatomy of the Human Body

Human body systems are comprised of many parts, from the smallest cells to the most robust bones. What makes the body amazing is how these parts come together to function as a whole. The smallest units in the body are cellular, and cells cluster to create tissues. When tissues coalesce, they create organs. Although organs in the body may seem separate, they all cooperate. A good example of cooperating organs are the stomach and intestines, which digest food. When sets of organs work together, they are called an organ system or body system. 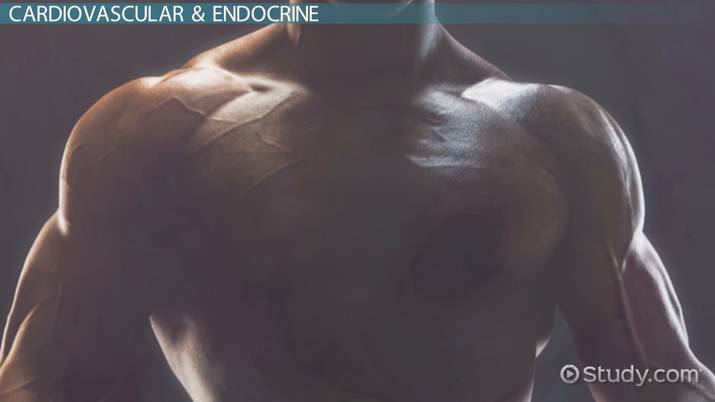 Coming up next: What is DNA?

The heart is the major organ of the cardiovascular system and pumps blood through arteries and veins. The heart is in the thorax, while veins and arteries span the entire body. All human body systems, human body parts, and organs in the body are dependent on the cardiovascular system. The respiratory system supplies the heart with freshly oxygenated red blood cells. The digestive system provides the blood with nutrients. Hormones from the endocrine system are transported through the blood. Waste products are also transported through the blood to the urinary system. The lymphatic system, too, relies on the transport of immune cells through the cardiovascular system. And every tissue, cell, and organ in the body needs a constant supply of oxygen from oxygenated blood to survive.

The lungs are filled with tiny clusters of balloon-like structures called alveoli, which trap both oxygen and carbon dioxide. When humans breathe air, they inhale oxygen, which is collected by the alveoli and given to red blood cells. When the oxygen is used up, red blood cells bring back carbon dioxide waste. The alveoli feed oxygen into the blood and expel carbon dioxide through breathing out.

Also called the immune system, the lymphatic system is the guardian of the body, warding off infections and cleaning up old, dead cells. The lymphatic system spans the entire body as a network of vessels that link to clusters of lymph nodes, which are hubs for immune cells. It also includes additional human body parts, including the bone marrow, spleen, and thymus, which help store, grow, and develop immune cells. The skin is also considered a part of the immune system because it acts as a barrier to prevent bacteria and other harmful organisms from entering the body. All human body systems and organs in the body rely on the lymphatic system for protection.

The nervous system is a sensory and control system for the entire body and is vital for all human body systems and organs in the body to function. It includes the brain, the spinal cord, and neurons. The brain is the primary control hub and is part of the central nervous system (CNS). The spinal cord acts as a highway for electrical signals to travel back and forth between the brain and body, and is also part of the CNS.

Neurons span the entire body, from the head to the feet. The neuron network picks up environmental information and sends it to the brain. The brain also transmits signals via neurons to every organ, muscle, and tissue in the body to tell it how to function and what to do. Much of the brain is also made from neurons. Neurons extend outwards from the spine and supply other human body parts with sensory nerve tissue, like the skin and muscles. These sensory neurons are part of the peripheral nervous system (PNS). The reason why human beings can feel, taste, smell, see, hear, and have a sense of balance and awareness of their own bodies is because of the nervous system.

The function of the endocrine system is to direct and control metabolism, growth, and sexual reproduction. This body system works closely with other human body systems, particularly the nervous system and the reproductive system. Although the endocrine system involves only a specific set of organs in the body, glands in endocrine organs produce hormones that circulate in the blood and affect all cells, tissues, and human body parts.

Endocrine organs include the thyroid, parathyroid, adrenal glands, pancreas, ovaries, testes, and the brain (pituitary gland, pineal gland, and hypothalamus). The pancreas regulates blood sugar. Adrenal function is vast and includes the regulation of growth, metabolism, response to stress, inflammation, and more. The ovaries and testes produce hormones related to the reproductive cycle. The parathyroid is involved in calcium absorption and metabolism, and the thyroid has numerous functions, including growth and metabolism. Organs of the endocrine system are located in the head, neck, and trunk of the body.

Skin is the only organ of the integumentary system, but nails and hair are also included. Skin is like a soft shell that covers the entire body; it is also the heaviest and largest organ. All human body systems and organs in the body rely on the skin for protection because it functions as a barrier, protecting all internal human body parts from the outside environment. However, skin has other functions, too. It is a sensory organ that is responsible for the sense of touch, helps regulate temperature by sweat and body hairs, and expels wastes from the body through sweat.

Digesting and absorbing nutrients from food is the primary function of the digestive system. Of all the human body systems, the digestive system involves complex, coordinated cooperation between many organs in the body and human body parts. Digestive organs include the stomach, small intestines, large intestines, mouth, salivary glands, esophagus, pharynx, pancreas, liver, and gallbladder.

When food is eaten, the digestive system releases chemicals called enzymes to break food into its most basic parts, like vitamins and minerals. Carbohydrates become simple sugars, fats become fatty acids, and proteins become amino acids. These nutrients, along with water, are absorbed into the digestive system and distributed by the circulatory system. All digestive organs are located in the head, neck, and trunk.

Unneeded water, minerals, and some toxins are excreted from the body via the urinary system, which includes the following human body parts: the bladder, the ureter, the urethra, and the kidneys. The kidneys collect and filter waste it receives from the blood via the cardiovascular system and send it to the bladder. The urinary system is largely directed by hormone signals from the endocrine system, which tells it how much water and minerals should be expelled. Each kidney is connected to a long tube called the ureter, which connect to the bladder. The bladder then sends water and waste down the urethra, which is how urine is released into the external environment. All human body systems and organs in the body rely on the urinary system to expel wastes released into the bloodstream. The urinary system is located in the pelvis, which is the lower part of the torso.

When numerous tissues and organs in the body work together to perform specific functions, it is called a body system; there are ten systems in total. The musculoskeletal system includes bones, muscles, and related structures that give the body a framework for strength, structure, and form. The cardiovascular system involves the heart, veins, and arteries, which circulate blood and nutrients to cells, tissues, and organs. The respiratory system absorbs oxygen from the air via the lungs and expels carbon dioxide waste through the breath. The lymphatic system is the immune system which fights off environmental pathogens and infections. The nervous system is a network of neurons and tissues which includes the brain and spinal cord (the central nervous system), and the sensory neurons (the peripheral nervous system).

Parts of the brain, thyroid, parathyroid, pancreas, adrenal glands, and gonads form the endocrine system, which makes hormones for sexual reproduction, growth, and metabolism. The heaviest and largest human organ is the skin or integumentary system. The digestive system requires coordination between the intestines, stomach, liver, pancreas, gallbladder, and esophagus to process food into small particles that can be digested and absorbed. Wastes and extra water from the cardiovascular system are collected by the kidneys and excreted into the ureters, bladder, and urethra in the urinary system. Lastly, the reason why sexual reproduction is possible is because of the reproductive system, which makes gametes.

Homeostasis in the Body Overview & Examples | What Is Homeostasis?

Microbes Types & Benefits | What are Microbes?

What is Energy Conservation? - Lesson for Kids

The Respiratory System Lesson for Kids