David Regan, Artem Cheprasov
Explore the skin diagram and how many layers of skin humans have. Learn about skin tissue, see how thick skin is, and identify the seven layers of human skin. Updated: 03/07/2022

How Many Layers of Skin do we Have?

There are a total of 7 layers to the skin. These layers are as follows: 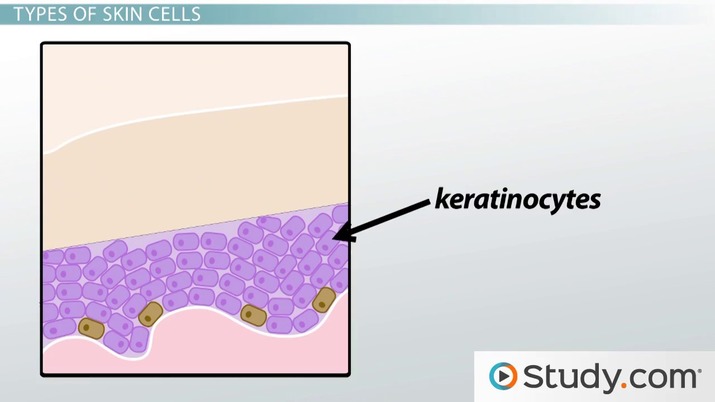 Try it now
Back
Coming up next: Anatomical Directional Terminology: Anterior, Posterior and More

In the skin diagram above, notice three distinct divisions: the epidermis, dermis, and subcutis. The components and sub-components of the skin and how they function together are referred to as the integumentary system.

The epidermis is made of stratified squamous epithelial tissue and is divided into five layers. In order from outermost to innermost layer, they are as follows:

In the diagram above, notice the basement membrane. This membranous structure consists of a combination of collagen and fibers to aid in anchoring the epidermis to the dermis.

The dermis is made of dense irregular tissue and is composed of the following two layers:

The Subcutis is also known as the hypodermis. This structure of the skin is mostly made of fatty adipose tissue and anchors the skin to muscle tissue. This is not considered a "layer" of the skin, rather a division that is responsible for attaching skin to muscle.

Skin thickness will vary throughout the body depending on the overall function and amount of external stress imposed on the body region. For example, skin on the hands and feet is thicker than in other areas of the body. This is due to the presence of the stratum lucidum which helps reduce friction. Although skin thickness varies by location, there is a general consensus about the overall thickness of each layer of the skin.

The specific cells we see as dust are keratinocytes which come from the stratum corneum layer of the epidermis. As the epidermis is exposed to the external environment, it demands many functions, including protection from pathogens and ultraviolet radiation from the sun. To accomplish this, there are specialized cells in the epidermis.

There are three major divisions of the human skin or integumentary system. From superficial to deep (outer to inner) they are the epidermis, dermis, and subcutis. The skin is made up of 7 layers, five of which make up the epidermis (superficial to deep): 1. stratum corneum 2. stratum lucidum 3. stratum granulosum 4. stratum spinosum 5. stratum basale. Found in the dermis, the 6th and 7th layer are the papillary layer and the reticular layer. The layers of the skin are anchored to the muscles via the subcutis.

Skin thickness varies from human to human, body region to body region. Your hands and the bottom of your feet have thicker skin than your thigh or forearm. The epidermis generally ranges from 0.2mm-1.6mm thick. The dermis is on average between 1.5mm-4mm thick, and the subcutis is anywhere from 2.5mm-3.5mm thick.

The skin contains many specialized structures and cells. Some notable specialized structures in the epidermis include melanocytes which determine skin color, protect you from UV radiation, and start synthesizing the production of vitamin D. Keratinocytes which provide protection and maintain water retention. Merkel cells are able to detect light mechanical sensations. Lastly, Langerhans cells stimulate immune response when prompted.

The subcutis is a division of the skin that is concentrated with large blood vessels that bring waste to be removed and provide nutrients to the skin. The subcutis anchors the skin to muscle.

What are the different layers of the skin?

There are seven layers to the human skin. In order from superficial to deep (external to internal) they are 1. Stratum corneum 2. Stratum lucidum 3. Stratum granulosum 4. Stratum spinosum 5. Stratum basale 6. Papillary layer 7. Reticular layer.

How thick are the layers of the skin?

Skin thickness will vary throughout the body. In the epidermis, the presence of stratum lucidum in the palms and heels will make the skin much thicker (1mm-1.6mm) than other areas of the body (0.2mm-1mm).

Although the skin thickness may vary from person to person and body region to body region, this is the average layer thickness:

Try it now
Back
Create an account
Human Skin Diagram & Function | How Many Layers of Skin Are There?
Start today. Try it now
UExcel Anatomy & Physiology: Study Guide & Test Prep

Human Skin Diagram & Function | How Many Layers of Skin Are There?
Related Study Materials

The Structure of the Skin

Dermis Layers | What is Dermis? Papillary vs. Reticular

What are Phalanges? | Phalanges Function & Anatomy

Epidermis | What Does the Epidermis Do?

Hypodermis Overview, Function & Location | What is the Subcutaneous?

CSF Function & Composition | What is CSF?