What Is Iambic Tetrameter?

What is iambic tetrameter? Iambic tetrameter is a type of poetic meter. To fully understand what this means, it is first essential to understand the concept of poetic meter and the concept of an iamb. Meter is a term for rhythm in poetry: which syllables in a line of poetry are stressed or emphasized, and which are unstressed? Different patterns of syllable emphasis have different names; iambic tetrameter is one of them. An iamb is a term for a particular syllable stress pattern. Such syllable patterns are called metrical ''feet.'' Iambs consist of two syllables: the first is unstressed and the second is stressed. If a line of poetry contains four iambs, it is said to be written in iambic tetrameter, as ''tetra'' comes from the Greek word for ''four.''

The simplest iambic tetrameter definition is a poem written with four iambs per line. One thing to keep in mind is that this is not the only tetrameter definition in poetry: if a poem uses a metrical unit other than iambs, it can still be written in tetrameter. The opposite of an iamb, for example, is a trochee: a stressed syllable followed by an unstressed syllable. A poem written with four trochees per line would be written in trochaic tetrameter. Iambic tetrameter is sometimes incorrectly called ''iambic quadrameter,'' but ''quadra'' comes from Latin, and metrical terms come from Greek.

As mentioned above, iambic tetrameter is less common than iambic pentameter. Other types of iambic meter also exist, depending on how many sets of syllables are in each line. Iambic dimeter has two iambs per line, iambic trimeter has three, and there are also longer line lengths like iambic hexameter and iambic heptameter, with six or seven iambs per line respectively. An iambic tetrameter example can be found in ''The Romany Girl'' by Ralph Waldo Emerson:

The sun goes down, and with him takes
The coarseness of my poor attire.

Emerson admired John Milton's earlier use of iambic tetrameter, which may have inspired him to use the form in his own work. 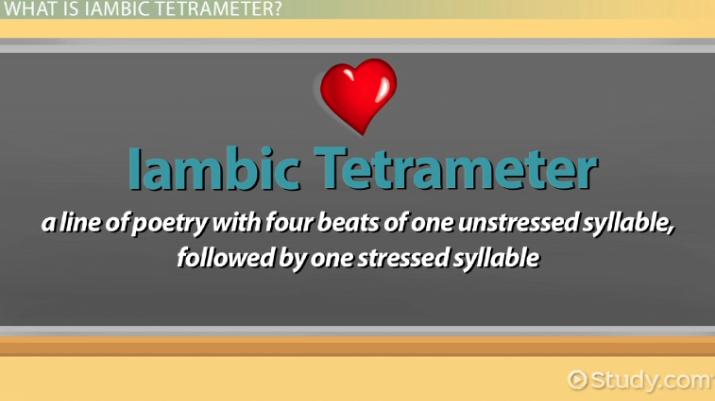 Coming up next: East of Eden: Summary & Characters

There are many famous iambic tetrameter examples that can be found throughout the history of English poetry. Some have speculated that the prevalence and popularity of iambic meter can be attributed at least in part to the way that iambic meter seems to flow naturally in English. It sounds natural to the ear and seems well suited to the syllable structure of the English language. It is also easy to read out loud.

There are other metrical forms that seem better suited to other languages: dactylic hexameter, for instance, is a metrical form that was popular in ancient Greece and Rome, but it is almost never used in English because the syllable pattern is so challenging to pattern onto English words. A dactyl consists of one stressed syllable followed by two unstressed syllables; a dactylic hexameter has six dactyls per line.

Sir Walter Scott's ''The Lady of the Lake''

The stag at eve had drunk his fill,
Where danced the moon on Monan's rill,
And deep his midnight lair had made
In lone Glenartney's hazel shade;
But when the sun his beacon red
Had kindled on Benvoirlich's head,
The deep-mouthed bloodhound's heavy bay
Resounded up the rocky way,
And faint, from farther distance borne,
Were heard the clanging hoof and horn.

''The Lady of the Lake'' by Sir Walter Scott is a very long narrative poem about the conflict between King James V of Scotland and the clan Douglas. It also features a romantic subplot, mistaken identity, and all kinds of other intrigues. The poem is primarily written in iambic tetrameter, as in the stanza above, but some parts are written in iambic pentameter and iambic trimeter.

Lord Byron's ''She Walks in Beauty''

She walks in beauty, like the night
Of cloudless climes and starry skies;
And all that's best of dark and bright
Meet in her aspect and her eyes;
Thus mellowed to that tender light
Which heaven to gaudy day denies.

George Gordon, Lord Byron was one of the Romantic poets. This poem is one of his most famous works, and it was probably inspired by a real woman. Her name was Anne Beatrix Horton, Lady Wilmot. The two met at a party and Byron was struck by her beauty. It is unclear whether the two ever had an affair, though Byron was known to be a womanizer. This poem is a good example of how writers can bend the rules of a poetic form: there is an extra syllable in the final line of this stanza (the second syllable of ''heaven'') but it is such a small deviation from the form that it does not break the immersion for readers.

Emily Dickinson's ''I Heard a Fly Buzz When I Died''

In addition to its use of iambic tetrameter, this poem is an excellent iambic trimeter example. Emily Dickinson wrote most of her poems using this alternating meter, where one line would be written in iambic tetrameter and the next in iambic trimeter. This poem also showcases some other traits common to Dickinson's poetry, including the use of capitalization and frequent use of dashes. Dickinson's most famous poem, ''Because I Could Not Stop for Death,'' also uses the same alternating tetrameter-trimeter pattern seen here.

I wander thro' each charter'd street,
Near where the charter'd Thames does flow.
And mark in every face I meet
Marks of weakness, marks of woe.

In every cry of every Man,
In every Infants cry of fear,
In every voice: in every ban,
The mind-forg'd manacles I hear

William Blake was an enigmatic figure. He was a poet and an artist, and he also claimed to have religious visions throughout his life. In the above stanzas, Blake adheres closely to the iambic tetrameter form, except in the fourth line. The first, unstressed syllable of this line is missing: ''marks'' is emphasized. As with Byron's poetry, such small lapses of form are very common in poetic works and do not indicate that the poet is breaking with the pattern found in the rest of the poem.

Iambic tetrameter is a kind of poetic meter or rhythmical pattern. An iamb is a metrical foot where the first syllable is unstressed and the second syllable is stressed. The word ''tetrameter'' comes from the Greek root for ''four,'' meaning that anything written in tetrameter will have four feet per line. Iambic tetrameter, therefore, has four iambs per line. It is a poetic form that is easy to read out loud, which has made it very popular for centuries.

What type of poem has iambic tetrameter?

What is an example of tetrameter?

Tetrameter is a term that refers to any poem with four metrical feet per line. Examples of types of tetrameter include iambic, trochaic, dactylic, and anapestic tetrameter. Of these, iambic tetrameter is the most common.