Copyright
Cynthia Cooley-Themm, Chris Clause
In this lesson, study iconic memory and the experiments used to investigate it. Learn the duration of iconic memory, and explore day-to-day examples of what it stores. Updated: 11/03/2021

What is Iconic Memory?

Sensory memories created from the sense of sight are, aptly, called visual memories. Early visual memories fit into two major categories. The first is a limited capacity, visual working memory that can last several seconds. The second is a high-capacity but shorter-lived iconic memory. Iconic memory is the incredibly brief storage of a visual stimulus, after the stimulus has been removed. In young adults the duration of iconic memory is estimated to be around 250 milliseconds, or 1/4 of a second. This type of memory allows one to recall an image or visual stimulus for just a flash before the brain discards it. Simply put, iconic memory allows someone to remember a bit more information but for a shorter period, whereas working memory allows an individual to hold onto a smaller amount of information slightly longer.

What Does Iconic Memory Store?

Human memory is a very complex subject. Memories themselves are discussed in terms of how they are formed, how long they last, the type of information they are comprised of, and whether they are conscious or subconscious. We create and experience memories in three main stages. A pair of researchers named Richard Atkinson and Richard Shiffrin were the first to propose these three stages back in 1968. Their theory of memory proposes three components of human memory: sensory register, short-term store, and long-term store. This Atkinson-Shiffrin memory theory helps to explain how our memory works.

A sensory memory is a very early short-term storage of information experienced by any one of the five major senses. The duration of these early memories varies slightly depending on which sense it was formed by, but none last more than a few seconds. Atkinson and Shiffrin were the first to address and name the two most common memory types collected by humans. These were the visual and auditory memories, named iconic and echoic memories, respectively.

Iconic memory briefly stores a visual stimulus after it is no longer visible.

Short-term memory lasts a few minutes and has a limited capacity. Information stays here for several minutes before it is either forgotten or transferred to long-term memory.

We will discuss the process of transforming memories from one stage to the next later in this lesson.

Many studies have suggested that iconic memory plays a role in a process called change blindness, defined as the failure to detect changes in a visual scene. Imagine two visual scenes that are identical except for some small differences. In most cases, an observer can recognize these changes when briefly presented with one image followed immediately by the other. Even after the images are removed from sight, for the briefest of moments iconic memory allows a person to recognize some differences between the two images.

However, if the presentations of the two images were interrupted by a brief interval of time, the iconic memory of the stimuli is effectively erased. In this scenario, an individual has experienced change blindness, wherein it is much more difficult to notice any changes between the two scenes. This is because iconic memory only lasts about a half of a second. Having a brief interval between the observation of the two scenes essentially outlasts the duration of iconic memory, and results in the ''blindness.''

Most children have experienced a very memorable iconic memory if they have ever played with or watched someone play with sparklers. They might have noticed how the light of the sparkler leaves a trail or ''smear'' as it is waved around. This is because the brain remembers (through iconic memory) the location of the sparkler just the briefest of moments ago. When images are presented so quickly, this temporal property of iconic memory allows the brain to integrate the images together. The brain can essentially ''fill in the blanks'' of the entire path of the sparkler as it moves. Flip books are another example of this temporal property of iconic memory. When the pages are flipped fast enough, they almost blur into one continuous scene.

Another proposed role of iconic memory involves saccadic eye movements. Human eyes make very rapid movements (at a rate of several times per second) called saccades, while shifting their gaze from one location to another. Just like the ''smear'' of the sparklers in the example above, our visual system receives a similar input while we make these rapid eye movements. Our visual information is smeared with reduced quality. With the image constantly moving due to the saccades, our brains must integrate this information smear to put together a clear, cohesive, and recognizable image. Iconic memory is thought to play a role in this phenomenon. Evidence suggests that iconic memory allows us to detect changes in the scene that occur during a saccade and to fill in the blanks of the scene to allow for complete and smooth visual processing.

A single memory travels along quite a journey in the brain depending on its fate. Every memory starts as a sensory memory, but only a small percentage make it all the way to long-term memory, otherwise known as durable storage. Most of what we experience is simply forgotten. As mentioned, simple sensory memories typically last no longer than a few seconds. In the case of visual (iconic) memories, these visualizations begin their journey in the primary visual cortex of the occipital lobe. This is where vision occurs.

These two structures process and regulate our visual input. Visual information is stored in the occipital lobe for just a few milliseconds as iconic memories form. From there, the information is either discarded or passed along to the hippocampus within the temporal lobe to be converted to into short-term and, eventually long-term, memory. Here, these visual memories can finally persist beyond a few minutes. The determining factor in whether a sensory memory is forgotten or transitions into a longer lasting memory lies in how much attention is paid to the stimulus at the moment it is being experienced. Therefore, concentration, focus, repetition, rehearsal, and etc. all allow us to process our brief sensory memories into durable storage. 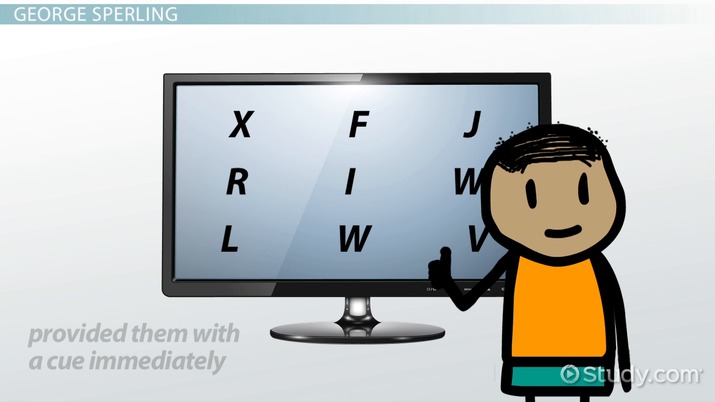 The average duration of iconic memory in young adults is estimated to be around 250 milliseconds, or 1/4 of a second.

We owe much of our current understanding of iconic memory to experiments designed and conducted in the early 1960s by a cognitive psychologist named George Sperling. In his experiments, Sperling presented the participants with an image of letters displayed in three rows for only 1/20th of a second (50 milliseconds). As the letters disappeared, the participants were asked to report all the letters that they could remember, in a process called free recall. These were named the whole report experiments because participants were asked to report from the whole image.

Originally, the subjects were only able to recall 4-5 of the 12 letters in the image, an accuracy of only 33- 40%. Subjects, for example, only remembered the first row and perhaps one or two in the next. One might conclude that participants were unable to recall all 12 letters due to a limited capacity of this type of memory. Humans simply can't remember more than 4 to 5 letters in these conditions. But not Sperling. Sperling hypothesized that all letters were, in fact, mentally registered but their memory faded away within a short amount of time. In simplest terms, Sperling proposed that the elapsed time, rather than the capacity, limited the participants ability to recall all 12 letters.

So, in a second round of experiments, the image was presented to participants in the same manner except in this case, Sperling adopted a partial report technique. Here, he asked them to report only letters from one specific row, as the letters disappeared. He used one of three different tones to indicate which row they were assigned to report. He found that as long as the tone sounded within 1/3rd of a second after the display of the letters, the participants were able to correctly recall the characters with an accuracy of 74-100%. If any more time elapsed before the tone, the accuracy of the letter reporting drastically declined. If the tone was played after the memory extinguished, they could not recall the letters.

From this, Sperling concluded that the subjects had indeed seen all of the letters but could only remember them very, very briefly. This was an interesting finding because in the whole report experiments, participants rarely reported any letters from the third row accurately. But the partial report experiments showed that individuals did indeed store information from the third row, and could accurately report it before the memory faded away. It turns out Sperling's hypothesis was right! Now we know that iconic memory has a large capacity, but the information disappears within a half a second.

All human memories begin as sensory memories when our bodies take in information from our surroundings. Visual information is stored for no longer than a half a second as iconic memories. If we concentrate on the visual stimulus, it can be sent on to other brain areas to become short-term memory lasting a few minutes. Finally, with further focus and attention, we can store these images in our long-term memory.

Atkinson and Shiffrin were two prominent researchers in regards to memory. They gave a name to our visual and auditory memories, calling them iconic and echoic memories. Another important milestone in memory research is attributed to George Sperling, a cognitive psychologist. Sperling conducted experiments in the early 1960s which broadened our knowledge of iconic memory. His experiments were divided into two rounds, called the whole report experiments, and the partial report experiments.

What is an iconic memory in psychology?

What's an example of iconic memory?

An iconic memory is an immediate, brief memory of a visual image that lasts no more than half a second. As such, an example of iconic memory is when you see a car passing by on the highway, and for a brief moment you can picture the car after it is gone.

What is iconic memory and how long does it last?

Iconic memory is very short-term sensory memory in which a person can recall visual images for just a few milliseconds after the physical image has disappeared. Iconic memories last no longer than a half a second, or 500 ms.

Recall vs. Recognition | Examples of Memory