Imagery in Romeo and Juliet

William Shakespeare's Romeo and Juliet is a tragedy following a pair of lovers whose relationship ends in their deaths, along with the deaths of several members of their families.

The play uses imagery throughout the narrative to tell its story. Imagery is the use of figurative language to evoke sensations in the reader. Imagery makes a work more immersive by using descriptions that appeal to more than just sight; they captivate the reader's other senses as well.

Imagery in Romeo and Juliet comes from the language the characters use. Many examples come from soliloquies they recite in the play. A soliloquy is a speech to one's self, a monologue addressed to the speaker themselves. 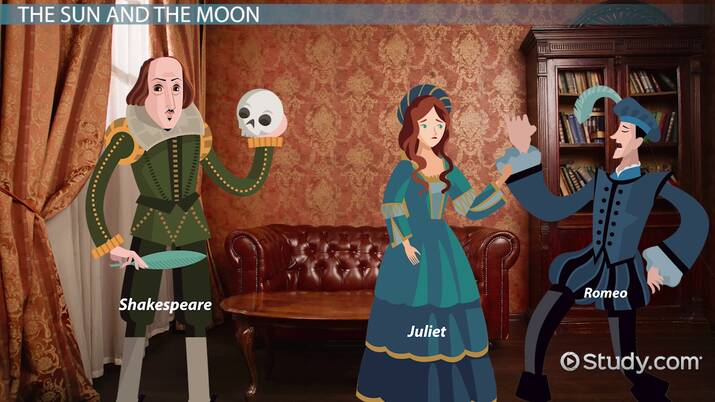 Try it now
Back
Coming up next: Oxymoron in Romeo & Juliet

Examples of Imagery in Romeo and Juliet

Light and darkness in Romeo and Juliet show the contrast between the characters. They are opposites and usually stand for good and evil, respectively. For example, Juliet and Romeo are both described as giving off light, albeit in different ways. Romeo famously compares Juliet to the sun, for example. He then also describes himself as the "envious moon." This imagery is strange, however, since at the time the play was written, the sun was considered masculine and the moon feminine. It's possible Shakespeare wanted to highlight how the sun is the greater of the two, as Romeo has fallen completely in love with Juliet and sees himself as the lesser.

Comparing them both to the sun and moon does highlight Romeo's belief that they belong together, since the sun and moon are seen as a pair that works together to bring night and day. While they are described as both giving off light, the comparison also shows how they are opposites, alluding to the feud their families are having, which threatens to keep them apart.

The climactic deaths of Romeo and Juliet occur when Romeo drinks poison from a cup and Juliet stabs herself with Romeo's dagger. The imagery again highlights opposites. A dagger stabs and enters, and a cup holds something inside of it. There is sexual symbolism in the way the lovers kill each other, too. Romeo drinks his poison from a cup, an item which traditionally can represent a woman's sexuality. Juliet kills herself by stabbing herself with Romeo's dagger, a phallic symbol. Their deaths, then, are both the narrative and sexual climax of their relationship.

Worms are mentioned a few times. Mercutio mentions them in relation to worms in the context of skin mites which cause scabies. More importantly, however, he mentions them in his final scene when Tybalt kills him. As he bleeds out, Mercutio says to Romeo, "A plague o' both your houses!/ They have made worms' meat of me: I have it,/ And soundly too: your houses!" The reference to worms' meat is to indicate that he will soon be dead and buried. It highlights how he believes his death is undignified, as he earlier states of Tybalt's killing strike, "'Zounds, a dog, a rat, a mouse, a/ cat, to scratch a man to death! a braggart, a/ rogue, a villain, that fights by the book of/ arithmetic!"

Romeo also mentions worms when he enters Juliet's tomb and slays Paris. In his soliloquy, Romeo says, "here, here will I remain/ With worms that are thy chamber-maids; O, here/ Will I set up my everlasting rest,/ And shake the yoke of inauspicious stars/ From this world-wearied flesh." He mentions worms as being their servants after they are buried, and he mentions the "inauspicious stars," a reference to Romeo and Juliet's fate being sealed and set in the stars since they cannot be together as Romeo believes Juliet is dead. By dying with her, Romeo believes he is defying that fate.

Baptism and Other Religious Imagery

After Juliet muses that their names, Montague and Capulet, are the only things keeping them apart, Romeo says, "Call me but love, and I'll be new baptized;/ Henceforth I never will be Romeo." The image of the baptism compares Juliet's love to a transformative experience. A baptism is typically a religious ceremony where someone is admitted into a religious community or otherwise cleansed. In saying this, Romeo is admitting that if Juliet were to love him and accept him, the experience would wash away the old version of himself.

Literary Devices in Romeo and Juliet

Shakespeare uses other literary devices in Romeo and Juliet to show the tragedy of the narrative. Symbolism and allegory are two of the more prominent devices.

Symbolism is when one thing is a stand-in for another thing, usually an idea or an abstract concept. Mercutio's speech to Romeo about Queen Mab, for example, is a symbol of the power of desire. Mercutio asserts that Queen Mab is a tiny fairy who brings dreams to sleepers, yet these dreams do not bring joy but rather emphasizes whatever desire they already have. This speech occurs just before Romeo sees Juliet. The desire he feels for her begins their relationship and ends in tragedy.

An allegory is when a story uses symbolism to make the entire story symbolic of another event or idea. Given the symbols and imagery presented, the play could be seen as an allegory of bad decision making. The main action begins when Romeo sneaks into the Capulet ball and sees Juliet. Then the two begin an affair despite the dangerous feud between their families. Romeo refuses to fight Tybalt and gets Mercutio killed, then kills Tybalt in retaliation. He and Juliet make plans to escape, yet their plans are foiled when Romeo comes to believe Juliet is dead and kills himself just before Juliet wakes up. At various points, the story could have ended or been avoided if certain characters had made different choices.

William Shakespeare's Romeo and Juliet is a tragedy filled with imagery that highlights the story's various contrasts. The imagery typically comes from the language the characters use, often in a soliloquy or in speeches made to the characters themselves and the audience.

For example, Romeo compares Juliet to the sun and Juliet compares Romeo to the moon, implying that both belong together despite being different. When Romeo is in Juliet's tomb, he mentions that worms will be her chambermaids, but he will fight the fate that has been written in the stars by dying with her. Here, the imagery of the worms means death.

Pick one of the following prompts and write between 300 and 500 words of analysis in response. There are some hints below to help if you find yourself stuck, but you do not have to follow those hints if your analysis takes you in a different direction!

Read III.ii.131-138 and IV.iv.35-41. Consider the particular image of death evoked by both passages and analyze what this unusual comparison contributes to the play.

Read Romeo and Juliet's first meeting (II.v.92-110). Identify the imagery used and discuss what its use reveals about how the characters see one another, and what it foreshadows for the play as a whole.

Prompt Two: Death is personified as a husband in both of these passages. You might discuss how it foreshadows the play's ending and/or the differences between how Juliet describes death and how her father describes it.

Prompt Three: The imagery is religious. You might discuss how the association of each other with a god reinforces how Romeo and Juliet are utterly devoted to one another, and/or how their forbidden love feels like a sin as a result of the feud between their families.

What is an example of imagery in Romeo and Juliet?

An example of imagery in Romeo and Juliet is Romeo comparing Juliet to the sun. He is describing her as a great source of light and warmth. She is everything to him.

Why is light and dark imagery used in Romeo and Juliet?

Light and dark imagery is shown to both contrast characters and show how they are alike. Romeo calls Juliet the sun and Juliet calls Romeo the moon. These are opposites and are associated with night and day, but they also complement each other.

Hyperbole in Romeo and Juliet

Literary Devices in Romeo and Juliet

Alliteration in Romeo and Juliet

House of Capulet of Romeo & Juliet | Who is Juliet's Cousin?

Allusion in Romeo and Juliet by William Shakespeare | Analysis & Examples

Themes in Romeo and Juliet by William Shakespeare | Analysis & Examples

Aside in Romeo & Juliet

Puns in Romeo and Juliet by Shakespeare: Act 1 | Overview & Examples