Copyright
Anne Powell, Rachael Smith
Read about the In Re Gault case of 1967. Learn the facts of the Gault case and identify the effects of the Supreme Court's ruling on the juvenile justice system. Updated: 02/21/2022

In Re Gault Case

The landmark Supreme Court decision in this 1967 case forever changed the way due process rights would be interpreted for juvenile defendants (those under 18 years of age) in the United States. Under the U.S. Constitution, specifically the 5th, 6th, and 14th amendments, legally enforceable rules require that law enforcement follow, and the courts guarantee, fair procedures when a person is accused of a crime. Further, the 14th Amendment also requires that all persons be treated equally under the law. In other words, no discriminatory or preferential treatment is allowed. Until the case "regarding Gault", which is what its unusual title, In Re Gault, means, due process rights were not universally assured to juvenile defendants. The fate of Gerald Gault, an Arizona youth who was just 15 years old when he was taken into police custody, rested entirely in the hands of the presiding judge in a brief, informal hearing. 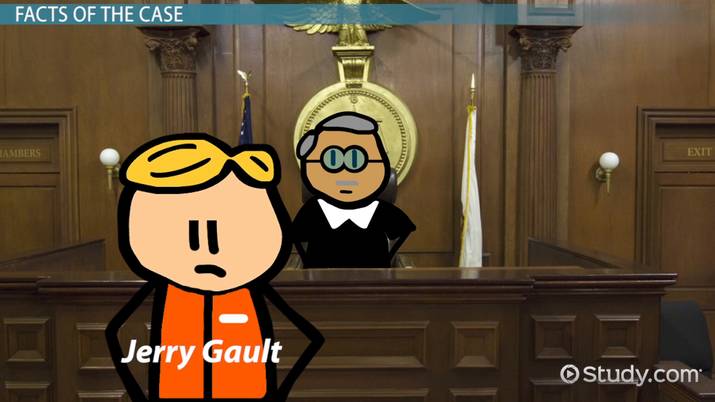 Try it now
Back
Coming up next: Status Offense: Definition & Law

Facts of the In Re Gault Case

Such thinking reflected the en loco parentis doctrine that placed judges in pseudo-parental positions to consider the best interests of juvenile offenders. But in the Gault case, it became clear that this approach denied due process rights rather than protecting them. With no evidence but a neighbor's complaint accusing Gault and a friend of making an obscene phone call, "Jerry" Gault and his friend, Ronald Lewis, were arrested and detained at a juvenile detention facility on June 8, 1964. No notice was provided to Gault's parents, who found out about the arrest later in the day after speaking with the parents of Ronald Lewis. Similarly, neither Gault nor his parents were informed of the arresting officer's petition for a preliminary hearing until two months later, preventing review of accusations and evidence that would be used against him in court.

This hearing was informal. The accusing witness was not present, and no supporting evidence was provided. Gault appeared before the judge alone, without legal counsel (an attorney) and without being informed that he did not have to testify against himself. This right against self-incrimination had been affirmed a year earlier in the U.S. Supreme Court's ruling in the case, Miranda vs Arizona. As a result, Gault was returned to the juvenile detention facility for another three days. A week after his release, a formal hearing was held, this time with his parents present, but again without testimony by the neighbor who pressed the criminal charges and without any evidence against him. Since Gault had been arrested before and was, at the time of this arrest, on probation for participating in the alleged theft of a wallet, he was sentenced to the juvenile detention facility for another six years.

Habeas Corpus in the In Re Gault Case

Gault's parents' petition for a writ of habeas corpus (Latin for "show me the body," or "show me the prisoner") on his behalf, was denied by the Superior Court of Arizona. The assurance of habeas corpus, which is a prisoner's right to be brought before a judge promptly to understand and respond to relevant criminal charges, is defined in Article 1, Section 9 of the U.S. Constitution as a right that cannot be denied unless "public safety requires it". The Gaults' appeal of the lower court's decision on this matter was denied by the Supreme Court of Arizona because juveniles were not, at the time, considered eligible for judicial appeals (requests for higher courts to review the facts of lower courts' decisions). Similarly, the Arizona Supreme Court found that all legal procedures had been properly followed. In response to the Gaults' petition, the U.S. Supreme Court reviewed the case on December 6, 1966. Five months later, on May 15, 1967, the Court ruled, unanimously in Gault's favor.

Supreme Court's Ruling in In Re Gault

Supreme Court Justices Clark, Douglas, Fortas, and Harlan all wrote opinions supporting this unanimous decision based upon the importance of due process protections in the American legal system. These include the rights to question opposing witnesses and to review evidence collected by prosecutors. Throughout this process, based upon a prior decision in the case of Gideon vs Wainwright (1963), criminal defendants who cannot afford their own attorneys are also entitled to court-appointed legal counsel. The right against self-incrimination (sharing information that could be used against you) would have been in force, as well. No such protections were provided to Gerald Gault, since juveniles were, at the time, treated differently under the law. While the justices agreed that different treatment for juveniles could be reasonably justified, they wrote that, in this case, the juvenile's penalty was much harsher than one that could have been imposed upon an adult convicted of the same offense. This violated 14th Amendment guarantees of both due process and equal protection under the law.

To review, the landmark Supreme Court decision "In the Case Regarding Gault" in 1967, while recognizing that it is sometimes appropriate to treat juveniles differently under the law, stated that juveniles cannot be denied any of the due process protections that adults accused of crimes enjoy. Due process procedures ensure that all criminal defendants are treated equally and fairly under the law. They guarantee against harsher treatment based upon age, wealth, and social status by informing all persons of their rights to:

In Re Gault changed the juvenile justice system in the United States by replacing outdated thinking that placed judges in parental roles when considering and ruling on cases involving minors. Instead, as a result of this decision, criminal defendants who are not yet legal adults cannot be denied constitutional due process protections guaranteed to those over the age of 18. Opposing witnesses must provide affidavits of sworn testimony in advance of a trial, prosecutors must submit supporting evidence for defendants' (and parents') review, public defenders must be provided for those who cannot afford attorneys, trials must be timely and their proceedings public, and the rights to a jury trial and protection against self-incrimination (the right to "plead the 5th") must be honored. Together, these rights ensure that all criminal defendants receive fair trials and are not wrongly imprisoned. A juvenile's right to appeal the ruling of a lower court was also affirmed in this case.

Where did the In Re Gault case happen?

Gerald Gault was arrested in Gila County, Arizona, which is in the central part of the state. The Gila County Courthouse, where Superior Court is held, is in the city of Globe, while the Arizona Supreme Court is in Phoenix.

What was Gerald Gault denied?

Gerald Gault was denied several important constitutional protections. These included writ of habeas corpus which guarantees a prisoner be brought before a judge in a timely manner to understand and respond to criminal charges, preventing unlawful imprisonment. Due process rights to fair legal procedures, including the right to a fair trial, were also denied.

What effect did In Re Gault have on juvenile rights?

The Supreme Court's decision in this case rejected the en loco parentis principle that had previously guided jurisprudence in cases involving those who had not yet attained the age of legal majority. Instead, as a result of In Re Gault, juveniles are entitled to the same legal protections as adults, specifically habeas corpus and due process rights, in criminal proceedings against them.

In 1967, 15-year-old Gerald Gault was accused of making inappropriate phone calls, termed "lewd" and "obscene" by the complainant. Gault was arrested without parental notification, tried without opposing witnesses or supporting evidence, and eventually sentenced to serve six years in a juvenile detention facility.

Why was the In Re Gault case important?

The In Re Gault case is important because it forever changed the way constitutional due process and habeas corpus protections are interpreted in juvenile criminal cases by requiring defendants under the age of 18 to be provided with the same constitutional guarantees when accused of crimes.

In Re Gault Case of 1967 | Facts & Summary
Related Study Materials