What is an Industrial Society?

The industrialization definition distinguishes industrialized countries from "developing" or "underdeveloped" countries because it means that a nation has developed an economy and society that focuses on industry and produces goods via mass production.

There are several defining characteristics of industrialized societies, including large urban centers, the tertiary sector (the service sector) of their economies, large-scale organizations (companies and corporations), and mass production. Industrial societies are also characterized as self-sustaining and self-perpetuating. Since industrial societies manufacture goods for themselves, and oftentimes for trade, the society's economy is able to support itself. Additionally, factory work and distribution also create many entry-level jobs, further boosting the economy since more money is in the hands of the people and circulating throughout the society. This promotes consumerism. Additionally, the need for a less skilled workforce to complete tasks means that less time and resource is spent training and fixing mistakes. This increases overall company productivity which allows for more products to be produced in a shorter amount of time than in the previous eras.

The methods used by industrialized societies to get goods to the market involve mass production, which is also called "Fordism" after Henry Ford. Mass production involves dividing work so that each person does a straightforward task, which can be done to a higher standard. As mass production increased and technology improved, assembly lines that were manned by people could be taken over by machinery, freeing people to do other jobs within the company. In modern-day, most assembly lines use a combination of machinery and manpower.

Industrialization is the process of social and economic change that transforms a culture from being an agrarian (agricultural) society into an industrial one.

The Industrial Revolution started in Great Britain around 1770 when textile makers began using new machines to make thread more quickly than before. Industrialization also brought about social change in Great Britain because huge cities were built, and a new working class sprang up who needed places to live and work.

Industrialism was established in the United States between 1820 and 1840. This time frame marks the "First Industrial Revolution."

The Second Industrial Revolution produced several inventions, including electricity, the telephone, and cars. This time it happened in Europe, America, and Japan. Around this time, some inventors made steam engines powered by coal. This energy source made it possible for people to build machines used across many diverse industries. These technological and societal changes led to the growth of the economy, which meant that more money was being made.

The Second Industrial Revolution was a period of great change in a society's way of life. It was an era when technological advances were made rapidly. The introduction of electric power had a significant impact on how people lived their lives because it allowed for many tasks to be done more quickly than before. It was also characterized by improved transportation, mechanization, and a more effective use of natural resources. 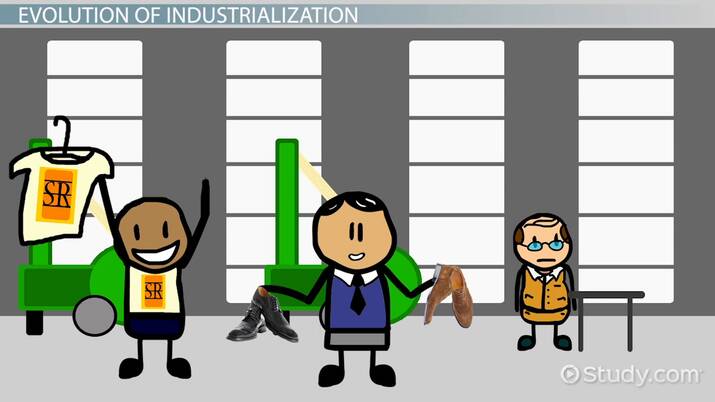 Try it now
Back
Coming up next: Pastoral Society: Definition & Concept

The characteristics that define an industrial society include:

Post-Industrialism in the U.S.

The United States has undergone a transformation from an industrial society to a post-industrial one. The country's economy is now based on the service sector, which employs more people than the industrial sector. This is because automation has taken over many jobs that were once done by humans.

The United States is no longer an industrial society because of the increase in knowledge-based jobs. The country is now a global leader in technology, finance, and entertainment.

Before the mid-1800s, most cultures were agricultural societies. In these societies, people worked on farms for most of their lives. They typically did not leave the land they farmed until they got too old to do so anymore. These communities were generally small towns where everyone knew one another. However, during the Industrial Revolution, major cities in the U.K. and U.S. were classified as industrial. In the industrial regions, people worked in factories to make anything from textiles to iron goods to lace.

Work typically began when everyone got up and ended when they went to bed. These types of communities were crowded. This is how city slums developed.

In modern day, most industrial societies are located in developing countries in Africa and Asia. China is one such example. China supplies industrialized products to the world, such as technology and clothing.

Industrialization is an important step for a society to go through as the country moves from being underdeveloped, to developing, and then to being developed. Industrialization helps boost the economy as well as provides work opportunities for the people.

An industrial society is defined by its reliance on scientific and technological advances to drive its economy. Industrialization is how an organization becomes industrial. Industrialization is categorized by mass production; it is usually developed through technological advances which discover new energy sources, refine the farming process, and create easily accessible goods. Industrial society began to emerge due to the textile industry. Later, the steam engine and other large operations brought in the Second Industrial Revolution.

What are the characteristics of industrial societies?

Industrial societies are characterized by the use of large-scale production and mass-production techniques in order to make products. Some other characteristics include the use of power sources (such as coal, oil, and natural gas) and machines to produce goods, as well as that most people work in factories or offices.

What is an example of an industrial society?

What would you find in an industrial society?

An industrial society is characterized by many things and is often found in urban areas, but there can be factories in remote locations as well. An industrial society is self-sustaining, self-perpetuating, and, since there are many entry-level jobs, boosts the economy by putting more money and resources into the hands of workers. This produces consumerism.

How To Write Effective Conclusions: Importance and Elements

How To Write Effective Conclusions: Importance and Elements