On one hand, it is important because it can sometimes assist the individual in learning the new subject matter. On the other hand, it can actually be a detriment or hindrance to the individual when learning new material. 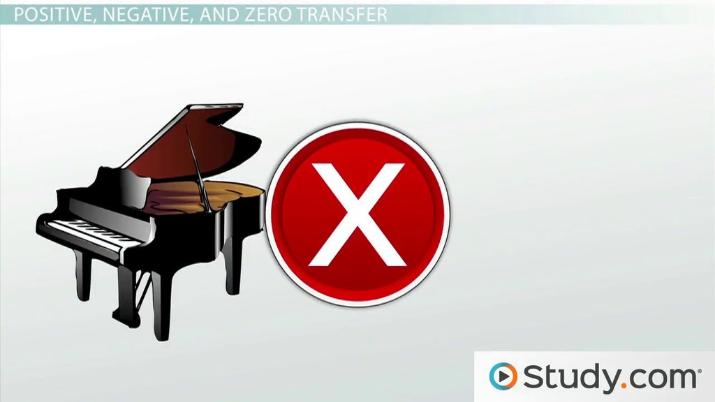 Try it now
Back
Coming up next: Cognitive Thinking: Creativity, Brainstorming and Convergent & Divergent Thinking

Julio is a talented mathematics major who also speaks fluent English and Spanish. In his senior year of college, he is smitten by a young woman named Manon who is a star on the college rowing team. However, she speaks French and only a bit of English. Julio runs to the local town to buy a portable French translation book he can hide in his front shirt pocket and is relieved to discover French and Spanish are roughly 75% lexically similar, while French and English are about 25% lexically similar. Knowing this fact, he is able to recognize many of the French words, and soon he is whispering sweet French words in Manon's ear while they share a coffee at a romantic French bistro.

Contrarily, the term negative transfer entails a situation when the knowledge or skills acquired by an individual in an old subject are obstructive toward the individual learning about a new subject. In other words, the old skill in some way interferes with or inhibits the new skill. Memorizing one set of numbers and then having them interfere with the memorizing of another set of numbers is an example of negative transfer.

Nate is a star on his university golf team and regularly shoots under par. At the driving range, his coach Natalia gives him praise whenever he keeps his chin up and allows his left shoulder to pass underneath smoothly. However, his senior year, Nate takes on a challenge from his fraternity brothers and tries out for the intramural boxing team. Nate gets in the ring with a smaller guy who he thinks he can take, but Nate keeps his chin up instead of down, as a boxer usually should, and the guy pops Nate right on the chin. Down goes Nate. In this case, Nate was a victim of negative transfer from the first skill to the second skill.

The term zero transfer or neutral transfer refers to when the learning of one particular skill neither promotes nor prevents the learning of another particular skill. In other words, acquiring one skill but then not being able to transfer any of those techniques to a different skill is an example of zero or neutral transfer. For example, learning about the plays of William Shakespeare usually has very little effect on learning to lake fish.

Willie is a member of his acclaimed College of William & Mary acting troupe and loves attending the annual Virginia Shakespeare Festival held in July in his state. After watching a particularly moving performance of Richard III on Saturday, Willie's Uncle Jessie informs Willie he is taking him out fishing on his cool new aluminum bass boat. Truth be told, Willie doesn't particularly even like to fish or touch those icky plastic worms, but he loves his Uncle Jessie and agrees to go fishing anyway. Out on ''Lake Liealotta'', Willie tries to channel his acting skills toward his fishing technique. However, Uncle Jessie stares at him in concerned dismay when Willie emotes, ''To fish or not to fish; that is the bass question.'' While this moment of levity provides some humor and even a bemused smile from Uncle Jessie, the skill of acting for the most part does not transfer to the skill of fishing, and, therefore, we can say that for Willie there existed zero transfer of skills.

The term low-road transfer refers to a person using knowledge or skills from a previous subject, and then applying it to a brand new subject which is similar, but not the same, as the original subject. Low-road transfer tends to be more spontaneous and automatic. For example, a child is taught to look both ways before crossing the street until it is ingrained in their mind. The child doesn't have to think about it anymore. Using flashcards successfully to learn one subject and then using them again to learn another subject is an example of low-road transfer. Similarly, learning one type of video game can lead to making it easier to learn another type of video game.

Charlena is a video games champion, and especially thrives at vehicle driving games. Her dad Carl decides to enter her in the regional championships to be held at the local convention center. Upon arrival, Charlena is dismayed to discover the steering wheels, shifters, and other controls are slightly different than the home setup at which she practices for 25 hours per week. Carl consoles Charlena and assures her to just persevere and she will learn to adjust accordingly. After suffering an early loss in the double-elimination tournament, Charlena takes Carl's advice, eventually moves her way up through the loser's bracket, and defeats all the guys to win the tournament trophy. The low-road transfer of Charlena's driving skills played a pivotal role.

The term high-road transfer refers to an individual using knowledge or skills they acquired from a previous subject, and then applying it to a subject which is quite different from the original subject. As opposed to low-road transfer, high-road transfer tends to be more conscious or deliberate.

Elishah is an amazing guitar player in her college band, and on weekends they play at local restaurants and beer halls. However, one weekend she gets into an argument with the saxophone player over who is the greatest guitarist in history. The saxophone player quits the band in a huff, which is unfortunate as in the summer, the band is scheduled to play a huge gig down at the beach. Instead of spending a lot of time interviewing for a new saxophonist, Elishah opts to teach herself the saxophone instead. It is a completely different instrument, but Elishah realizes while reading her sheet music there does exist some abstract similarities as well. In the end, Elishah learns the saxophone just in time for the gig and nails the solo of the Eddie Money song, much to the delight of the enthusiastic crowd.

The five types of information transfer are:

What are the types of information transfer?

What is an example of negative transfer?

Why does negative transfer occur?

What's an example of positive transfer?

Positive transfer is when learning about an original subject is beneficial to an individual who is learning a new subject. For instance, learning one language can sometimes be helpful when learning a second language which has lexical similarities.

Communication as Information Transfer within Organizations

What Are Misplaced Modifiers and Dangling Modifiers?

Communication as Information Transfer within Organizations

What Are Misplaced Modifiers and Dangling Modifiers?