Joseph Comunale, David Wood
In this lesson, learn about infrared waves and find examples of infrared wave uses. See how humans have invented equipment that can utilize infrared radiation. Updated: 12/13/2021

Though humans don't have the natural ability to detect infrared waves from distances that would constitute seeing like a snake sees infrared waves, there are technologies that allow for the real-time visualization of infrared radiation and heat.

How are Infrared Waves Used to See?

As previously mentioned, infrared radiation is emitted by anything that possesses heat. It's important to remember that all things possess heat, even cold things such as snow or an ice cube; though cold things just possess less heat than things that are typically described as hot. Therefore, all things are emitting certain amounts and ranges of infrared waves. Therefore, if technology were to absorb, detect, and measure the infrared radiation emitting from everything in front of it just like a radio can for radio waves, the technology could essentially convert this data into visualization and possibly simulate what a snake might see. This is exactly what some technologies can and do achieve such as night vision goggles and thermal imaging cameras. Infrared or thermal imaging can be used for medical purposes, for applications within security systems and security cameras, and also warfare. However, there are also other examples of the application of infrared sensing technology. 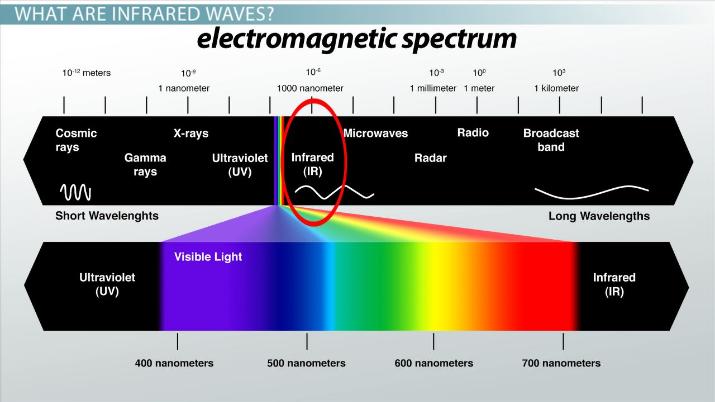 Try it now
Back
Coming up next: Renewable & Non-Renewable Resources: Definition & Differences

Infrared sensing technology is also used or applied within the following simple technologies or even large technological sectors and scientific fields of study:

TV remotes and many other remote controls use infrared emitting and sensing technology to all devices to signal and control other devices from a distance.

The field of astronomy applies infrared sensing technology for its useful applications in observing the surrounding universe. Astronomers can use infrared wave sensing technology to study seemingly dark regions of space and detect and observe things that might be distant or visually concealed by interstellar dust or light pollution. Additionally, dark clouds of dust and gas that are not emitting light can be seen by the infrared radiation they absorb, remit, and reflect from nearby stars. However, astronomers also have the technology to detect all kinds of electromagnetic waves such as gamma rays, ultraviolet, and x-ray. Additionally, because the Earth's atmosphere absorbs and protects the surface from experiencing radiation within the dangerous ranges of gamma, x-ray, and some ultraviolet, these special kinds of telescopes are usually sent into orbit and used remotely from Earth.

Meteorologists who study the atmosphere use infrared sensing technology to map out average global temperatures to study climate change and weather at a smaller scale. For example, infrared is used to study the progression and make predictions regarding hurricanes. Additionally, satellites observe global temperature over long periods which can be used to make predictions about possible future climate trends. These technologies allow meteorologists and climatologists to study cloud features and types, surface and land temperatures, and the amount of heat within the atmosphere and therefore the greenhouse effect.

Infrared waves or infrared rays are electromagnetic waves or electromagnetic radiation within the wavelengths between the ranges of 700 nanometers and 1 millimeter. These wavelengths and frequencies are just slightly larger than the ranges that are known as the visual light spectrum. Infrared light is just in front of the color red on the visual light spectrum. Though the human eye cannot detect and see infrared waves, certain technologies can be used and applied to absorb, detect, and measure infrared waves and allow for their visualization.

Thermal imaging cameras and night vision goggles can be used to detect the infrared waves emitted by all objects since all objects possess and emit or reflect at least some heat. Climatologists and meteorologists use infrared cameras to study cloud heights and types, the surface temperatures of land and water, and the amount of heat being trapped in the atmosphere by the greenhouse effect. Astronomers also use infrared sensing technology on special telescopes in space to study objects that emit little or no visual light but do emit infrared waves.

What are infrared waves in physics?

What are 3 uses of infrared waves?

Three common uses for infrared waves are the following:

Remote controls use infrared sensors to signal and control devices from distances.

Infrared sensing technology on satellites is used by meteorologists and climatologists to study the temperatures around the globe.

What is an example of infrared waves?

Infrared waves are a type of radiation that is emitted by objects that possess heat and are releasing that heat. For example, pythons and vipers have thermal sensors on their snouts that can detect the infrared waves emitting the body heat of their prey, making them very successful hunters even at night.

Is a remote an example of infrared waves?

A remote is an example of a device that uses infrared waves. A TV remote will use signals emitted from the front of the device in the form of infrared waves within certain wavelengths. These signals from the remote are detected by the television or other device and allow the user to control their device from a distance.

The Four Kinds of Trajectories for Celestial Objects