What are Intermolecular Forces? 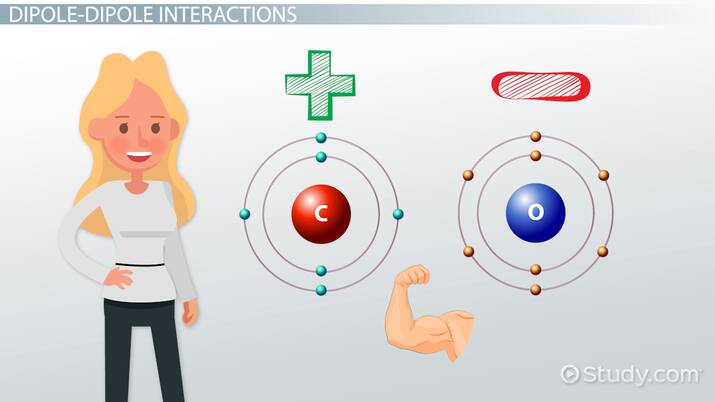 Determining the types of intermolecular forces in compounds can provide students and researchers with important insights into the physical properties of a substance. Intermolecular forces are determined in part by how the electrons are shared within the covalent bonds of different molecules. When electrons are shared equally within a covalent bond, a non-polar molecule is formed. By contrast, when the unequal sharing of electrons is present in a molecule, a polar molecule is formed.

Whereas London dispersion forces only produce extremely brief dipoles in nonpolar substances, Van der Waals dipole-dipole interactions are based on the polarity of a molecule. When electrons are shared unequally within a molecule, a more stable dipole will form, in which a compound possesses distinct negative and positive regions. In dipole-dipole interactions, molecules will be attracted to one another by bringing the positive region of one molecule adjacent to the negative region of another molecule. The attraction between opposing dipole charges creates a more stable compound than one in which similar dipole charges are aligned. Dipole-dipole interactions are considered stronger than London dispersion forces.

Ionic interactions represent the strongest type of intermolecular force. This typically results from the attraction between a polar molecule and an ion or a molecule that has a net electrical charge. The result is sometimes referred to as an ion-dipole interaction. For example, when a calcium ion ({eq}Ca^{2+} {/eq}) is mixed with water, the strong attraction between the calcium ion and water molecules will produce vigorous bubbling in which hydrogen gas and a calcium hydroxide precipitate are formed. This reaction is produced by the ionic interactions between calcium and water.

Which intermolecular force would affect the boiling point the most?

What intermolecular force would affect melting point the least?

Understanding and Answering the Essays on the AP Chemistry Exam

Effect of Catalysts on Rates of Reaction

The Cop and the Anthem: Themes & Irony

Links in the Cosmic Distance Ladder