In chemistry, atoms are held together by a variety of bonds. The two major bonds connecting atoms together include covalent and ionic bonding. Covalent bonding occurs when atoms share electrons with one another. By contrast, ionic bonding represents the attractive forces occurring between oppositely charged ions. These bonds represent types of intramolecular bonds.

In this lesson, the different types of intermolecular forces will be presented, along with examples for each type of force. 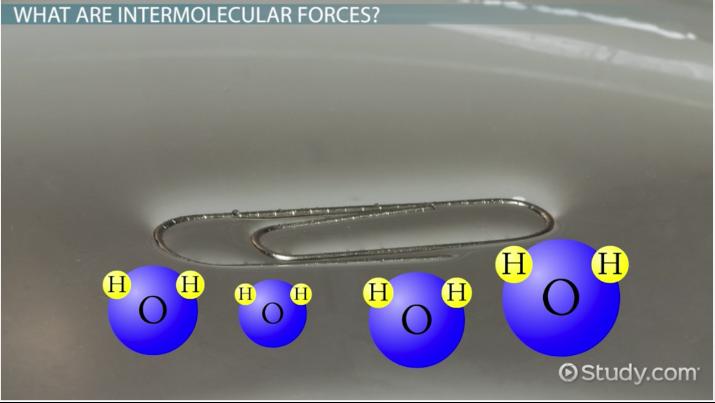 As mentioned earlier in this lesson, certain types of intermolecular forces develop when there are differences in the sharing of electrons within the covalent bonds between atoms. When this happens, there is the potential for partial charges to occur when the electrons have a greater attraction to one of the atoms in a covalent bond. This typically occurs when an atom possesses strong electronegativity, or the ability to attract electrons to itself.

When atoms with low electronegativity, such as carbon and hydrogen, are involved in a covalent bond, both atoms share the electrons equally. This results in the production of a non-polar molecule. By contrast, when an atom with high electronegativity forms a covalent bond with a low electronegative element, such as between oxygen and carbon, the electrons are shared unequally between the two atoms. This creates a polar bond between the two atoms.

Much like dipole-dipole forces, which will be discussed in more detail in the following section, ion-dipole forces form due to the attractive forces between an ion and a molecule with a dipole moment, or partial charge. An ion represents any atom that possesses either a net positive or a negative charge. A positive ion is referred to as a cation, while a negative ion is known as an anion. With ion-dipole interactions, a cation is attracted to the partial negative charge of another molecule, while an anion is attracted to the partial positive charge of a second molecule. Mixing table salt (NaCl) or a calcium ion ({eq}Ca^{2+} {/eq}) with water represents one example of an ion-dipole intermolecular force.

As described earlier in this lesson, dipoles form when different atoms in a molecule possess partial positive and partial negative charges. When these dipoles form, the partial negative charge in one molecule can attract the partial positive charge from a second molecule, much like the ionic bonds formed between ions. The presence of these partial charges causes the negative dipole to line up next to the positive dipole, thus forming a dipole-dipole interaction.

This type of attractive intermolecular force is best exemplified by hydrogen bonding between water molecules. Hydrogen bonds typically occur between hydrogen and one of three electronegative atoms - oxygen, nitrogen, or fluorine. In hydrogen bonding, the partially positive hydrogen atoms within a molecule like water are attracted to partially negative atoms with non-bonding pairs of electrons. In water ({eq}H_2O {/eq}), for example, hydrogen possesses a partial positive charge that is attracted to the non-bonding electrons of the oxygen atoms in other molecules of water.

Examples of intermolecular forces can be found in molecules that are important to a variety of living organisms. In DNA, the genetic material responsible for the transmission of traits in living organisms, several types of intermolecular forces contribute to the shape, strength, and flexibility of this structure. DNA is comprised of strands of protein that contain atoms capable of forming dipole moments. Hydrogen bonding, a type of dipole-dipole interaction, readily forms between the hydrogen and oxygen atoms of adjacent proteins. This dipole-dipole force helps to create the double helix structure of DNA.

In much the same manner, hemoglobin, the protein responsible for transporting oxygen in the blood, provides an excellent example of the importance of intermolecular forces to protein function. Hemoglobin contains iron ({eq}Fe^{2+} {/eq}) ions that help to bind oxygen. When oxygen binds to hemoglobin, the protein undergoes a structural change due to the ion-dipole interaction between the iron ions and oxygen molecules.

Intermolecular forces represent the interactions occurring between molecules that arise when there are differences in the sharing of electrons within the covalent bonds of different molecules. Depending on how electrons are shared within a molecule, there is the potential to create partial negative and positive charges. When two molecules equally share the electrons within a covalent bond, a non-polar molecule is formed. By contrast, when electrons are shared unequally in a covalent bond, a polar molecule forms. Polar molecules are responsible for the presence of partial positive and partial negative charges within a molecule, which is referred to as a dipole moment.

There are three types of intermolecular forces that form based on the type of dipole moment found in a molecule. Ion-dipole interactions form when ions are attracted to either the partial negative or partial positive charge of a molecule, such as when calcium ions are mixed with water. Dipole-dipole interactions result from the attraction of partially positive hydrogen atoms to non-bonding pairs of electrons in a partially negative atom of a second molecule. This is often referred to as hydrogen bonding. Finally, London dispersion forces occur between non-polar molecules like gasoline when quick dipoles form due to the movement of electrons.

What is an example of intermolecular forces in real life?

What is the definition of intermolecular force?

An intermolecular force represents a type of interaction that occurs between molecules. Intermolecular forces arise due to the presence of partial positive and negative charges when electrons are shared unequally in a covalent bond.

What does intermolecular mean in science?

Intermolecular refers to the interactions that occur between molecules. These forces form when partial positive and partial negative charges form in a molecule.

What are the types of intermolecular forces?