The original theory of intertextuality was developed by theorist Julia Kristeva as a way to explain the relationships between texts. Kristeva's theory posits that every literary text is essentially composed of earlier texts. In other words, all literature is fundamentally a conversation, and no literary work stands entirely alone. Kristeva argued that every text is actually an ''intertext'' that exists as an intersection between other literary works. Kristeva's concept of intertextuality is deeper than most contemporary interpretations of intertextuality in media, but it is a compelling one that has been further discussed by other theorists and philosophers. 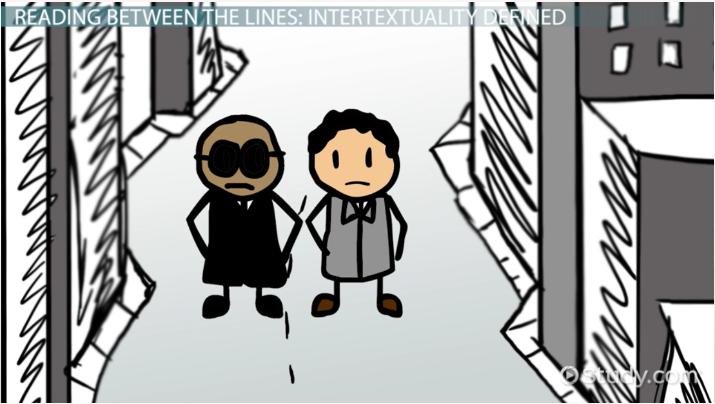 Try it now
Back
Coming up next: Anecdotal Evidence in Literature: Definition & Examples

There are many different types of intertextuality that can be used in literature. Some are very brief references that some audience members are bound to miss, while others are entire structures for a text that make the initial work's influence impossible to miss. The following is not necessarily an exhaustive list; there are many, many ways to create intertextual relationships between works, including:

Some works will fall into two or more intertextual categories, while others will defy categorization entirely. Intertextuality can run the gamut from respectful or even reverent references to existing works to references based on mockery.

There are hundreds of thousands of intertextuality examples in literature; indeed, it would be challenging to find any work that does not include any intertextual reference, either intentional or unintentional. Here, the term ''literature'' is used broadly to refer to all sorts of media: books, poetry, film, television, plays, and even, in some cases, music.

The film The Matrix has an intertextual relationship with Alice's Adventures in Wonderland by Lewis Carroll. This relationship is one of allusion. Morpheus offers to show Neo ''how deep the rabbit hole goes'' if he agrees to learn more about the Matrix. The film also includes mentions of following the white rabbit, which is another allusion to Carroll's work.

Ulysses is a modernist novel by James Joyce that contains many allusions to Homer's Odyssey. Even the name Ulysses is actually the Latin translation of the name Odysseus. Much of the novel features modernized plot lines and character arcs that function as intertextual references to Homer's work.

Frankenstein; or, The Modern Prometheus by Mary Shelley

Today, most copies of Frankenstein drop the book's subtitle. However, the subtitle is itself an allusion to Greek mythology. Prometheus was a Titan whose story involves being punished after creating humanity. Victor Frankenstein's character arc parallels that of Prometheus. The novel also contains many allusions to John Milton's Paradise Lost, which Frankenstein's creature reads and finds particularly relatable.

The title of Things Fall Apart is actually a quotation from, and intertextual reference to, ''The Second Coming,'' a poem by William Butler Yeats. Achebe is not the only writer to have made explicit reference to this poem; songs, other books, and television programs have all quoted lines of Yeats's famous work, which itself contains intertextual allusions to the Book of Revelation in the Christian Bible.

Translations of literary works are always necessarily intertextual, but Headley's translation of Beowulf is a great example of how translation can be a creative process. Headley's Beowulf is irreverent and makes more significant departures from the text than most other versions do, particularly through her inclusion of contemporary slang. Interestingly, the Old English text of Beowulf famously uses words called ''kennings,'' which are compound words with metaphorical meanings. In an interesting use of calque, Headley, like many other Beowulf translators, has included versions of these kennings in her translation.

Monty Python and the Holy Grail is a parody of Arthurian legend, especially major literary sources like Thomas Malory's Le Morte d'Arthur. The film features many of the major characters from Arthuriana, but the adventures that they have are humorous in nature. Members of the British comedy troupe Monty Python made their careers largely through parody, both of other literary texts and of elements of contemporary culture. Many comedies, including popular television shows, form intertextual relationships with famous texts and even with one another.

Rosencrantz and Guildenstern Are Dead by Tom Stoppard

Rosencrantz and Guildenstern Are Dead is an existential reimagining of William Shakespeare's Hamlet. Unlike many works, which can be enjoyed without prior knowledge of the texts that are intertextually referenced, it is nearly impossible to understand the plot of Stoppard's play without already being familiar with Hamlet, its plot, and its characters. Some dialogue from Stoppard's play is quoted directly from Shakespeare's play, as is the title itself.

Intertextuality is a term for the various ways that authors can use literary relationships to communicate with audiences. The theory of intertextuality was originally developed by Julia Kristeva, although Kristeva's definition of intertextuality is significantly more involved than most popular understandings today. There are many different kinds of intertextuality, including allusion (as in the title Frankenstein; or, The Modern Prometheus), parody, pastiche, calque, and translation. Many pairs of works have intertextual relationships in which one work references another, including The Matrix and Alice's Adventures in Wonderland, Ulysses and the Odyssey, and Monty Python and the Holy Grail and Le Morte d'Arthur.

Why is intertextuality used?

Different authors have wildly varying reasons for including instances of intertextuality in their works. Some use intertextuality to situate themselves in a particular literary genre. Others use it to pay homage to other works or to parody or mock other works.

What are examples of intertextuality?

There are many examples of intertextuality in literature. Some examples include:

How do you define intertextuality?

Intertextuality refers to any connection between two or more pieces of media. These connections can include allusions, quotations, parody, translation, and many other kinds of intertextuality that connect literary works.