Albert DuBose, Christopher Muscato
Learn about inversions and doubling in music. Study examples of first, second, and third inversions in music theory, as well as the doubling rules of music theory. Updated: 04/12/2022

The choir is onstage, in position, ready to perform. The conductor briskly steps onto the podium as the audience begins to applaud. The conductor politely bows, then turns and begins to direct the choral performance. Beautiful sounds fill the air, much to the delight of the people listening. What they may not realize, though, is why the music sounds so beautiful. They may not understand the principles that govern good music writing.

The writer of the music this choir is performing understands the principles of voicing, which refers to the way in which the notes of a chord are arranged. Musicians generally agree that there are certain combinations of notes that are pleasant to listen to, and other combinations not quite as pleasant. As the music is being arranged, the astute music writer is aware of the musical tapestry being created. Horizontally, voices flow gracefully from one chord to the next, and vertically, each chord is represented by a combination of notes that accurately make up each chord. For example, if, at any juncture, the choir sings a C chord, one expects to hear the notes C, E, and G. If the E is omitted, the chord loses its character. The notes that are left, C and G, are regarded as a rather unpleasant combination.

Music arrangers realize that there are two methods of voicing. The first method, inversion, is the repositioning of the notes in a chord. Inversion implies that the lowest note of a chord may be any of the members of the chord, whether it be the root, or the first step, of the scale upon which the chord is built, or perhaps the third, fifth, or any other member of the chord.

The second method of voicing is doubling. If a composition is being written in four-part harmony, and a triad has three notes, logically one of the three notes will be represented more than once in any of the voices. Music arrangers are unanimous in that if a chord is in root position, the root, or the note for which the chord is named, should be doubled. For example, if a choir is singing a C major chord in four-part harmony, two of the voices are singing a C while the other two voices are singing an E and a G. Doubling may be in unison, meaning that the exact same pitch is being sung by two parts, such as basses and tenors, or in octaves, such as when basses are singing second space C, bass clef, and sopranos are singing third space C, treble clef. 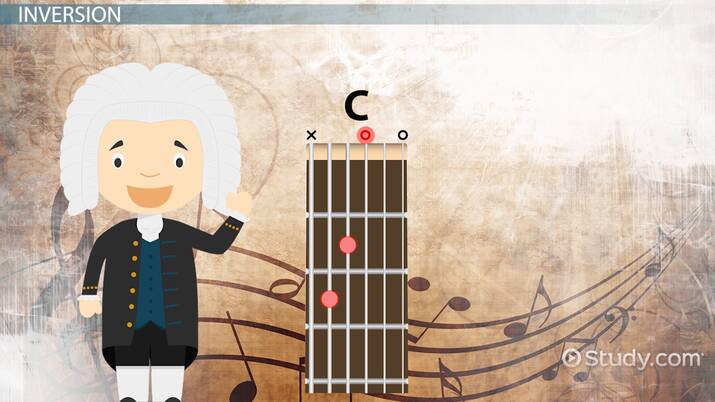 Coming up next: Simple vs. Compound Intervals: Definition & Concept

What is Inversion in Music?

Inversion in music is simply the repositioning of notes within a chord. Notes are neither added to nor omitted from the chord. Rather, the elements of the chord are moved elsewhere within the chord. Take, for example, an F chord in Figure 1:

Read from bottom to top, this chord is spelled F, A, C. If the music arranger wanted to do so, he could take the F from the bottom of the chord and move it up one octave, as seen in Figure 2:

This is still an F chord because it contains the same three pitches, F, A, and C, but the F has been moved up an octave. The third step of the F scale, A, is now at the bottom of the chord.

Seen in Figure 3 are the root position, first inversion, and second inversion of the C Major chord:

The definition, then, of inversion in music is an alteration in the arrangement of elements in a chord as they are read from the lowest pitch to the highest.

Types of Inversions in Music Theory

In order to understand inversions in music theory, one must first understand the triad.

A triad is the most basic form of a chord in music and is made up of the first, third, and fifth steps of a diatonic scale. For example, when playing a C major scale, the musician plays C, D, E, F, G, A, B, and C, one octave above the original C. The first step of the scale is C, the third step is E, and the fifth step is G, so a C major triad would contain the notes C, E, and G.

Because the note at the bottom is C, and because C is the first step of the C major scale, it is said that this triad is in root position, as seen in Figure 4.

What is Doubling in Music?

The term doubling refers to the practice of writing a note in two or more different locations within a chord. It is altogether possible for two voices, such as basses and tenors, to sing the exact same pitch, leaving altos and sopranos to sing the other two pitches of the triad, but more commonly, one may hear the basses singing, for example, second-space C, the tenors singing middle C, the altos singing E and the sopranos singing G. In this way, C is doubled in the basses and tenors. Other combinations, certainly, are possible, such as basses and sopranos singing the root of the chord while tenors and altos sing the third and fifth.

In Figure 5, a chord is being played with three Ds. In music theory, doubling does not necessarily mean that there are only two representations of any pitch.

There are various doubling rules that apply in music theory. They may be a bit problematic for the music theory student, but using them prudently will lead to improved musical composition:

Voicing refers to how a music arranger writes parts for each voice of a choir or instrument in an orchestra. Inversion is the repositioning of notes in any chord so that the bottom note is something other than the root of that particular chord. Doubling implies that a particular note in a chord is being played or sung by more than one voice or instrument. Doubling may be in unison, that is, the exact same pitch, or in octaves. Inversion and doubling are the two principal methods of voicing used by music arrangers.

There are several general rules for doubling:

What does first inversion mean in music?

What does inversion mean in music?

Intervals in Music: Overview & Use | What Is an Interval in Music?

Coda Overview & Symbol | What is a Coda?