Copyright
Ron Petrarca, Jessica Whittemore
Learn about the investiture controversy. Discover how a centralized church fought back against the right of secular rulers to choose the Pope and other church officials. Updated: 03/03/2022

Investiture Conflict Overview: What Is Investiture?

What is investiture, and what was the Investiture Controversy? Investiture is a word that describes the appointment of bishops. A bishop is a high-ranking official in the Catholic Church (as well as some other Christian denominations). The term "investiture" stems from the fact that bishops were given special vestments (clothing) after their appointment.

During the Early Middle Ages (476 AD - 1000 AD), there was no real separation of church and state. The Catholic Church gave legitimacy to monarchs, and monarchs, in turn, had a major role in choosing the religious leaders in the church. This includes bishops, cardinals, and even the pope himself. As a result, religious leaders had a great deal of political, social, and economic power, and often acted as puppets for the secular rulers of Western Europe. Additionally, many powerful secular rulers appointed family members or comrades to high church offices, ensuring that the church was, in turn, loyal to the state.

This situation began to change during the 11th century when church and state came into direct conflict with one another. One of the major political battles of the 11th and 12th centuries was known as the Investiture Controversy. This was a decades-long fight between several popes and Holy Roman emperors over the right to appoint bishops within the Holy Roman Empire. In fact, the Investiture Conflict was one of the most important and consequential battles between church and state in medieval history.

The Holy Roman Empire was the largest state in Western Europe during the Middle Ages. It was founded by Charlemagne in 800 AD and lasted, in one form or another, until 1806 AD. This empire not only covered what is now Germany, but several other areas of Europe as well, including Northern Italy. The Holy Roman emperor was chosen by an election of the various princes within the empire. High-ranking bishops within the Holy Roman Empire were also secular princes, and as such had the right to help choose the emperor. 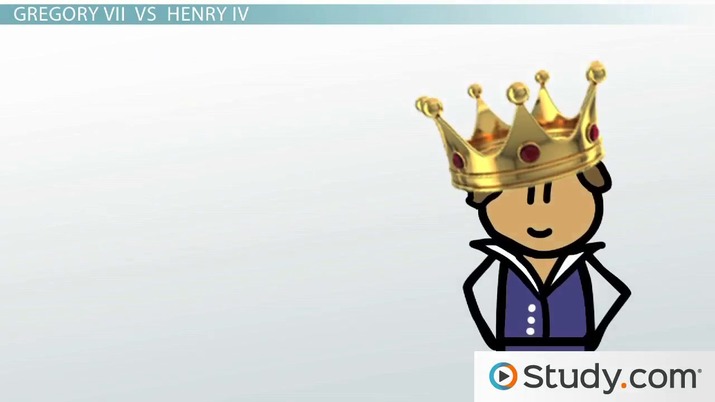 Try it now
Back
Coming up next: The 4 Lateran Councils: The Rules and Decisions

How Did the Investiture Conflict Begin?

In 1059 AD, the when the nine-year-old King Henry IV of Germany was crowned as the Holy Roman emperor, major church leaders gathered in Rome and issued a decree called Nomine Domini (In the Name of the Lord) that declared that secular rulers would no longer have a role in deciding who would be the next pope. Instead, this decision would be made by the cardinals of the Roman Catholic Church. (A cardinal is the most senior-ranking bishop beneath the pope.) This system of electing a pope, which exists to this day, was one of the first instances of erecting a wall that separated church from state. However, unlike the modern separation of church and state, the wall created by Nomine Domini only prevented the state from interfering in one specific area of religious activity. Additionally, it did not prevent the church from interfering in the state.

The Conflict Between Pope Gregory VII and King Henry IV

The reign of Pope Gregory VII (1073-1085) exacerbated the conflict between pope and emperor to an unprecedented level and would lead to one of the most important conflicts in Medieval history - the Investiture Controversy. Gregory VII believed in the complete autonomy of the church, the pope, and its bishops. Not only did he believe that the Holy Roman emperor should have no role in deciding who the next pope should be, but he also believed that investitures of bishops should be a right exclusive to church leaders. Gregory expressed his view in an official church publication known as Dictatus papae (Dictates of the Pope).

This publication infuriated Henry IV, and he subsequently removed the Gregory VII from his position as pope. In response, the pope removed Henry from his position as the Holy Roman emperor. These two actions created a bizarre situation in which both men refused to recognize each other's authority. Henry IV was also excommunicated from the Catholic Church itself, an act which, according to the beliefs of most people who lived in Europe during the Middle Ages, meant being condemned to hell. Henry travelled to the Italian city of Canossa to seek the pope's forgiveness, which was eventually granted. However, further conflicts between these two men broke out in later years.

While Henry IV and Gregory VII battled one another, an alternate pope was chosen by Henry. This pope was known as Clement III. Historians and the modern-day Catholic Church consider Clement III to have been an antipope. In other words, he had no real authority within the eyes of the church. (This was not the only time in history when a pope and antipope held office at the same time. This existence of an antipope would once again be a major issue in the 14th century during the Babylonian Captivity.)

The conflict between Henry IV and Gregory VII made Henry's position within the Holy Roman Empire vulnerable. A number of powerful noblemen took advantage of this vulnerability and rebelled against the emperor. This rebellion was known as the Great Saxon Revolt. In 1077, an alternate emperor named Rudolf of Rheinfelden was chosen as an alternate leader within the Holy Roman Empire. Just as Clement III was an antipope, Rudolf ruled as an antiking.

Rudolf was killed by Henry IV in 1080. The emperor subsequently invaded Rome in order to depose Pope Gregory VII once again. This time, Gregory called for protection from the Normans. (The Normans were the descendants of Vikings who had settled in northern France during the 10th century. They quickly assimilated into French culture and led two major conquests in Europe. One in England, and the other in Southern Italy.) The pope fled southwards into exile in Southern Italy and was kept safe by the Norman rulers there. Gregory VII died defeated in exile, but the Investiture Controversy did not die with him.

The Concordat of Worms

The Investiture Controversy continued on until the 12th century. It was resolved at the Concordat of Worms in 1122. This agreement was signed by Pope Callixtus II and Emperor Henry V (the son of Henry IV). In this compromise, the emperor gave up his right to appoint bishops. However, in exchange, the emperor was given the right to invest bishops with the land they held within the Holy Roman Empire. In other words, the emperor maintained some control over each bishop's secular powers. The emperor was also given the authority to be the final judge over whether or not a bishop was invested if there was a controversy over the bishop's election by his fellow clergymen.

Even though the Concordat of Worms ended the political conflict over the Investiture Controversy, it would still emerge from time to time in later centuries.

One of the most important outcomes of the Investiture Controversy was that it limited that state's ability to abuse power by misusing religious power and authority.

The Investiture Controversy was a conflict between the Holy Roman Emperor and the Roman Catholic church over the power to appoint bishops and other church officials as defined in the papal document Dictatus papae. This issue came to a head with the personal conflict between Emperor Henry IV and Pope Gregory VII. The conflict continued well after Gregory VII's death.

When was the Investiture Controversy?

The Investiture Controversy was a fight between the Holy Roman emperor and the pope over who had the right to appoint bishops and other church officials. This controversy caused several armed conflicts.

Was the Investiture Controversy a political or religious conflict?

The Investiture Controversy was both a religious and political conflict. This is because there was no separation of church and state during this era in history.

What was King Henry IV's role in the Investiture Controversy?

Henry IV did not recognize Pope Gregory VII's right to appoint bishops. Henry even tried to depose the pope and fought several armed conflicts against him.

What were the causes of the Investiture Conflict?

A conflict between church and state was the main cause of the Investiture Conflict. More specifically, it was a conflict between who had the right to appoint bishops, the pope, or the emperor.

What does investiture mean?

Investiture means to give a bishop his authority. The word itself derives from a piece of clothing called a vestment.

Try it now
Back
Create an account
Investiture Controversy Overview & Conflict | What is Investiture?
Start today. Try it now
History 101: Western Civilization I

The 4 Lateran Councils: The Rules and Decisions