There have many different attempts to measure intelligence. In the late 1800s, intelligence testing was a large part of the American eugenics movement, which was started by Sir Francis Galton. Eugenics is the goal of improving the genetics in a population by reducing what the people in power consider to be inferior genes. The word eugenics means 'good genes'. Galton did not use an IQ test as such; his tests were exercises that involved the brain receiving information and providing a response. His tests were exercises called Sensorimotor tasks.

Following on from Galton's research in the 1890s, the psychologist James McKeen Cattell developed a series of mental tests to measure a person's intelligence. Later in 1904, the most famous early example in IQ test history was created by Alfred Binet. Under direction from the French government, Alfred Binet carried out studies to find the average levels of performance in students.

These studies used particular tests to assess the students' intelligence and find their Intelligence Quotient (IQ). The tests determined students' mental age; the results of this were divided by their actual age, called their chronological age. This calculation gives the IQ of the student. This is why it is called a quotient. A person's chronological age relates to how people develop their mental skills as they grow up.

As a person's mental age is divided by the person's chronological age, the results are always compared to others of the same age as the test taker. The IQ test is calculated with the average score being 100, meaning that a score of 100 is expected for the average person. Scores below 100 are below average intelligence and above 100 are above average.

Suppose the person testing is a 5-year-old child (their chronological age) with a mental age of a 7-year-old (from the IQ test results); the child's IQ would be 140. This result would mean that the child is well above average IQ.

The formula is important, particularly in modern IQ tests, because it compares people of the same age. Just using a person's test scores or mental age does not give an accurate representation of their IQ level and intellectual ability. 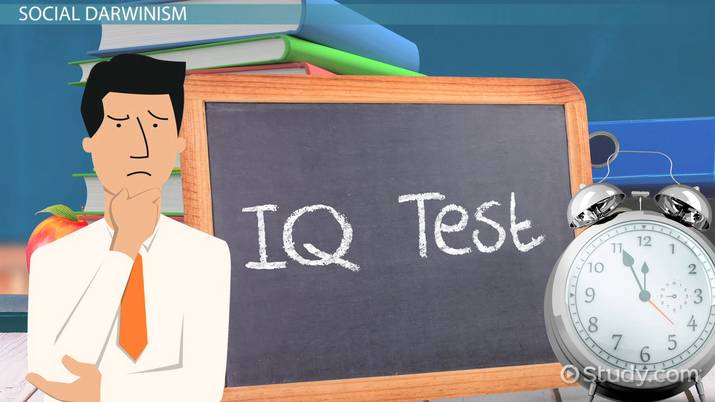 Alfred Binet, who made the IQ test, was a French psychologist. He wanted to examine the differences in student levels of understanding and develop a way to identify if they had learning difficulties and disabilities. In 1905, when the IQ test was invented, the French government sought to make it a law that all children attend school. To ensure all children received a proper education, they needed to find out if a child was below average intellect. They were particularly interested in students who continually struggled in reading and mathematics. To test this, they instructed Alfred Binet to develop the IQ test.

Alfred Binet and his colleague Theodore Simon worked to create the Binet-Simon intelligence test. This test contained 30 questions designed to look at how people dealt with areas of skill not related to academic understanding, so they did not include mathematical questions, for example. The questions focused on skills such as memory and problem solving, as well as how much people could pay attention.

During the testing, it became apparent that children had different levels of ability at the same age. This led to the concept of mental age, the age at which a person's abilities would be at a certain point in life. If a young child had the same capabilities as someone older, they would have a higher mental age than their actual age.

The Binet-Simon test was very influential and became the foundation for other researchers to develop more IQ tests and studies. While this test was highly regarded and used as a basis for IQ levels and assessments, it is not without limitations and criticisms. Binet recognized that the tests were limited in assessing a person's intelligence. Many factors can affect the results of the quiz, such as the economic background. He also believed that a person's intelligence changes throughout life, so their base level of intelligence varies. Most importantly, the concept of intelligence is complex and cannot be reduced to a single number equivalent.

Intelligence testing has been used as a way for societies and influential people to discriminate and mistreat others. Sir Francis Galton used IQ testing in his pursuit of eugenics; he thought that if they discovered people with 'inferior genes' and prevented them from having children, it would improve the population's genetic makeup. Intelligence was not the only gene he deemed inferior, but it was an important element of eugenics.

Following this work, in 1917, Henry Goddard an American psychologist wanted to limit the immigration of those he considered inferior. He used intelligence testing on people who entered the United States at Ellis Island. His tests were heavily in favor and biased towards his own culture and language, simply because they were not created by someone who spoke English but also created to be used on people like Goddard. This was not considered, and the tests' results were used to claim that race and intelligence were linked. Goddard claimed that 'as many as 40-50% of immigrants were feebleminded.' In his reporting.

These ideas and discriminations are still issues today with tests such as the SATs and other educational-based tests. The tests do not consider a child's situation in society or the opportunities their parents have received, meaning some minority groups are viewed as low attaining from these test results.

Researchers and psychologists are aware of the issues surrounding tests that focus on single-factor measurements. The Psychologist David Wechsler believed that intelligence tests should measure more than a single quantity to be effective. He believed that education, social, family, and economic factors should also be considered. Wechsler worked on the ways that intelligence can be measured and assessed and developed new intelligence tests to look into not just mental abilities but also personality and emotional skills. In 1939 He created new tests which focused on two types of questions, verbal and non-verbal reasoning. These were the Wechsler-Bellevue Intelligence Scale (WBIS).

Today, the WAIS is one of the most commonly used IQ tests, along with another, the Woodcock-Johnson Test. This IQ test looks at cognitive abilities and was developed in 1977 by psychologists Richard Woodcock and Mary E. Bonner Johnson.

While in the past, IQ tests were used to discriminate and mistreat people, today they have other uses such as:

Historically, testing a person's intelligence was linked to terrible practices. Sir Francis Galton started the eugenics movement in the late 1800s. Eugenics is the idea of improving the genetic makeup of a population by eliminating certain genes. He used exercises to understand how the brain responded to messages it was given. He used the results of these tests to give a level to a person's intelligence. In 1917 Henry Goddard carried on with Galton's work and used it to limit immigration into the United States; he wanted to improve the population's genetics. He tested immigrants as they arrived. The results of these tests were very low for minority groups due to language barriers and other social factors. These issues with testing are evident today in tests such as the SATs. Low scores are often interpreted as inferior intelligence rather than an indication of other issues that may be unrelated to intelligence.

Later in 1904, Albert Binet developed the idea of Intelligence Quotient (IQ), which was the person's mental age divided by their actual age and then multiplied by 100. While the other IQ testing was related to eugenics, Binet worked for the French government. They were trying to determine if children had learning disabilities so they could receive better help in schools, particularly those children that struggled with reading and mathematics. In 1955 David Wechsler adapted the test again, believing that intelligence tests should measure more than a single quantity. IQ tests are still used for many reasons, such as improving AI development, identifying learning disabilities, and criminal prosecution cases.

Who took the first IQ test?

How was IQ originally measured?

Alfred Binet created the first IQ test and measured people's IQ with a series of tests. The results of these tests can give the participant's mental age. This was divided by their actual age and then multiplied by 100. This would give a measurement of the person's IQ.

When were IQ tests first given?

IQ tests were first given in 1904 by Alfred Binet. He created the IQ levels and tests for the French government to test children's abilities in schools.

Intelligence & Personality Testing in the Workplace