Maram Ghadban, Laura Foist
Learn about iron compounds and their uses. Explore chemical formula and chemical name of common iron compounds, and the uses of iron, such as for plants. Updated: 11/16/2021

Iron makes up much of earth's inner and outer core. In fact, 5% of the earth's crust is made of iron! The most common rocks that contain iron are:

Not only is iron a common substance on earth but also abundantly available in the sun and stars. Iron fragments were deposited on earth when a dying star erupted massively many billions of years ago. Now, what is iron? Is iron a molecule? A chemical substance? Is iron a compound?

Iron is a lustrous gray metal that is found in group number 8 and period 4 on the periodic table. Iron's chemical name is ferrum, from the Latin word ferrium. This is how iron got Fe as its symbol. The format of nonmetal elements formula with iron is Fe X, where X is a nonmetal element or compound. The number of protons in iron's nucleus is 26, which makes its atomic number also 26. Its electron configuration is {eq}[Ar] 3d^6 2s^2 {/eq}. There are six electrons in its d orbital and two electrons in the s orbital, that means its outermost shell has a total of eight electrons. Notice that the d orbital is partially filled. They normally can hold a total of ten electrons, but the d orbitals in iron only hold six electrons. This is a good enough indication to tell that iron is a transition metal. Iron is categorized according to its oxidative state into:

Ferric and ferrous are the major types of iron compounds. Before proceeding to the sections that provide more information about these compounds, the reader is advised to examine the table that documents many of iron's important properties.

As mentioned in the earlier section, the type of iron compound is dependent on the oxidative state of iron itself. The oxidative state is an atom's oxidation number, which is a number that refers to the number of electrons an atom gains or loses, when it forms chemical bonds with other atoms. The type of chemical bond such atoms form is an ionic bond, which involves the complete transfer of one or more electrons from one atom to another. An electrostatic attraction is formed when ions form these bonds. The ion that has the ability to liberate the electrons from its outermost shell is called cation. And the ion that has the ability to accept the electrons are called anions. Cations are positively charged ions; they have more protons than they do electrons. Anions are negatively charged ions; they have more electrons than they do protons. Figure 4 shows how ionic bonds are formed through the complete transfer of electrons from the cation to the anion. 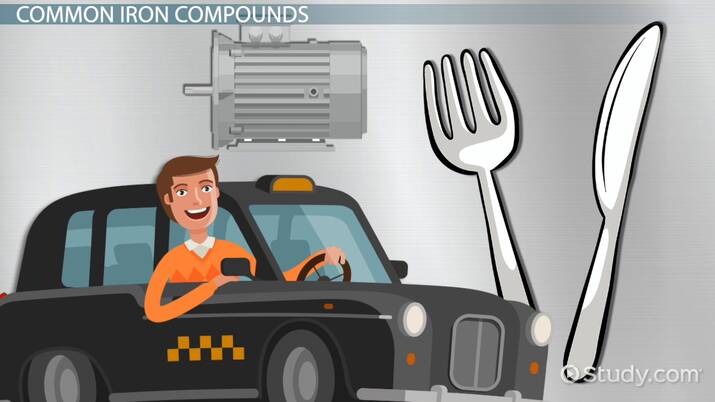 Coming up next: Aluminum Compounds: Properties & Plant Use

The many uses of iron are too versatile to mention. It is used in the manufacturing of steels which are used in various applications, including pipes and reactor vessels in chemical plants. Pure iron isn't used all by itself of course. It is often mixed with other materials depending on the equipment that's going to be manufactured. Iron steel is often mixed with alloys like nickel, chromium, and manganese. These alloy steels are used in constructing bridges, chains, and the list goes on. Combining iron steel with such alloys makes the steel extremely resistant to corrosion, which is why alloy steels are used in chemical plants when highly corrosive substances are put in the equation. That's the general uses of iron. The next question is: what does ferrous sulfate do? What does the ferrous and ferric iron compounds mentioned earlier do? The answer is provided in the following list:

Plant Use of Iron

Iron is extremely important when it comes to the plant's production of chlorophyll. Chlorophyll is the chemical located in the plant's leaves, in their chloroplasts specifically. Plants usually appear green because chlorophyll reflects the green wavelengths of light instead of absorbing it. Plants show that they are suffering from iron deficiency through the color of their leaves; green leaves are rich with chlorophyll and iron, yellow or pale leaves do not have the sufficient amount of chlorophyll. Deficiency in chlorophyll doesn't just make plants less fresh, it disrupts the plant's growth.

Plants need iron to produce enough energy to grow. Iron isn't sprinkled over the plants' leaves; most of the iron plants absorb is available in the soil, along with other minerals. Plants may still suffer from iron deficiency in spite of that fact that the soil is rich with ferric oxide. That is because plants do not absorb iron from ferric oxide well, which is why fertilizers are used. Fertilizers contain iron sulfates, which is a source of iron that plants absorb very well even at high pH levels or cold temperatures.

Iron is an essential metal in life. It is used in manufacturing buildings, bridges, equipment as well as in agriculture. Plants need iron to form chlorophyll. In spite of the soil being rich with ferric oxide, which is an iron source, plants struggle in absorbing it which leads to a disruption in their growth. Which is why iron sulfates are used in fertilizers; they are a source of iron that plants can absorb with ease even at high pH levels and low temperatures.

What are the uses and applications of iron?

Is iron a compound or not?

What is the element name of Fe?

The name of the element with the chemical symbol Fe is iron. The symbol Fe is derived from its Latin name, Ferrium. Iron is a transition metal in group 8 and period 4 on the periodic table.

What Are Radioactive Substances? - Examples & Uses

Water Balance & Regulation | How Much of Your Body is Water?

What is the Moist Heat Sterilization Method?

Of Mice and Men and Censorship

Alkaloid Structure & Examples | What are Alkaloids?