Copyright
Lakshmi Vasudevan, Sarah Erhart
Discover what the isoelectric formula in chemistry is, its role, functions, and importance. Know its formula and learn how to compute it through given examples. Updated: 03/23/2022

The pH at which the net charge on the molecule is zero is defined as the isoelectric point (pI) of that molecule. Note that the molecule at its pI exists as a zwitterion with an equal number of positive and negative charges. In order to understand more about the pI of a molecule and the related concepts better, read further.

What are pH and pKa?

A pH meter is very common in chemistry labs. This instrument simply measures the hydrogen ion concentration (or proton concentration) of a solution in a range from 0 to 14. Acids that are proton donors have a pH value anywhere between 0 to 7, while bases that accept protons have a pH value from 7 to 14 depending on their strength. In simple words, the stronger the acid, the greater the tendency to lose a proton, the lower the pH. Similarly, the stronger the base, the greater the tendency to accept a proton, the higher the pH. Pure water has a neutral pH of 7.0 at 25o C.

On the other hand, weak acids (or weak bases) dissociate only partially in solution. For a given weak acid (HA), its dissociation reaction could be written as follows:

The acid dissociation constant (Ka) for this reaction is:

where [HA], [ A- ] and [ H+ ] are the molar concentrations of the undissociated weak acid, its conjugate base, and hydrogen ion respectively.

The pKa of a weak acid can be determined experimentally by titrating with a known concentration of a strong base like NaOH. With the slow increments in the addition of the base (NaOH), the OH- ion from NaOH combines with H+ ion from the acid to produce water, which further promotes the forward reaction in the acid dissociation reaction (Figure 1). Eventually, at the midpoint of the titration, there is an equimolar concentration of undissociated acid (proton donor) and its conjugate base (proton acceptor). The pH at this midpoint is called the pKa of the weak acid. Finally, at the end of the titration, all the acid molecules are deprotonated.

Keeping these concepts in mind, dive further to understand the isoelectric point. 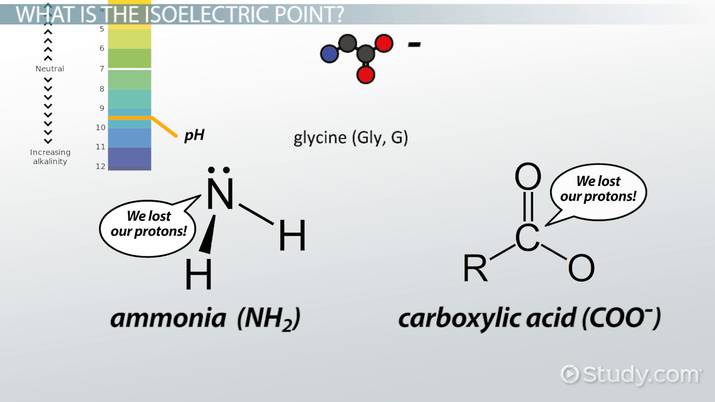 Try it now
Back
Coming up next: Hydrogen Chloride vs. Hydrochloric Acid

What is Isoelectric Point?

Different functional groups on a molecule can donate or accept protons depending on their pKa values. One of the best-understood examples is amino acids. In amino acids, the amino group acts as a proton acceptor and the acid group as a proton donor.

One can understand how the pKa of different groups comes into play upon titration of a simple amino acid (here, glycine as an example) with alkali, as explained earlier.

Further, upon titration, the deprotonation from the carboxylic acid group is complete such that the predominant species at this point is H3 N+ -CH2 -COO-. This species which has an equal number of positive and negative charges is known as zwitterion and the pH at which the net electric charge on a molecule is zero is known as the isoelectric point (pI) of the molecule. The isoelectric point of glycine is 5.94. Next, upon further titration, the amino group starts losing its proton, and at the pKa of the amino group (9.60 in the case of glycine), an equimolar concentration of the protonated species ( H3 N+ -CH2 -COO- ) and the deprotonated species ( H2 N-CH2 -COO- ) are present. At the end of the titration, the deprotonation from the amino group is complete with the predominant species being H2 N-CH2 -COO- at this point.

The isoelectric point can be calculated for a compound that has two or more pKa values. The amino acids that have a single amino and acid group with no ionizable functional R groups, the titration pattern resembles that of glycine with similar pKa values for each group. However, for amino acids with ionizable functional R groups, the titration curve is more complicated to accommodate the pKa of the R group. Take arginine as an example here.

For amino acids with two ionizable groups, the isoelectric point equation is:

where pI: isoelectric point of the amino acid

For amino acids with more than two ionizable groups, the isoelectric point calculation can be done by taking the average of the pKa values of two similar ionizable groups.

How to Calculate Isoelectric Point

Now, calculate the pI of glycine. It is very simple!

Now, calculate the pI of arginine. This is also simple!

As stated before, the pI of arginine would be the average of pKa values that are close to each other.

Essentially, this means that glycine and arginine would exist as zwitterions at their pI values.

Importance and Uses of Isoelectric Point

In order to study a protein, one must first be able to purify the protein from a mixture of proteins. Techniques that rely on the isoelectric point of a protein to achieve purified proteins are discussed below.

Problem: Suppose there is a mixture of proteins in a test tube but the isoelectric point is not known.

Solution: Make a gel by running a mixture of organic acids and bases under an electric field so that a pH gradient is created. Upon application of the mixture of proteins to this gel, each protein will migrate until the pH is equal to the pI of the protein. As explained above, the protein is neutral at its pI, therefore it would not migrate further. This technique can therefore be used to separate proteins with different pI values.

Problem: Suppose there is a mixture of proteins in a test tube that differs in pI values but has the same molecular weight or vice versa.

Solution: In this case, combine the isoelectric focusing technique (IEF) with SDS- polyacrylamide gel electrophoresis. Proteins are separated in the first dimension by IEF based on their pI values. In the second dimension, the IEF gel is placed over SDS- polyacrylamide gel. In this dimension, the proteins are separated based on their molecular weights under the influence of an electric field.

One of the most common techniques used in a molecular biology lab to separate proteins based on molecular weight is SDS-PAGE. An essential component in this technique is a buffer containing glycine and chloride ions. SDS-PAGE has two components that differ in their pH. As seen above, glycine has positive, negative, and neutral charges at different pH which is used here. At a pH equal to pI of glycine in the initial part of the gel, it is predominantly neutral, so migrates very slowly. In the latter part of the gel, the pH is above the pI making glycine negatively charged, so it moves past the proteins towards the anode. Thus, along with chloride ions, glycine helps to first stack the proteins and then migrate through the gel.

This leads to the end of the lesson. Here is a quick recap of what was learned up to now. This information is useful to purify our protein of interest from a mixture of proteins.

How does one find an isoelectric point?

However, for molecules with more than two ionizable groups (e.g. arginine), pI is the average of two pKa values that are close to each other.

What is an isoelectric point and how it is calculated?

Isoelectric point (pI) is the pH at which the net electric charge on a molecule/protein is zero. At its pI, the molecule/protein is electrically neutral. pI can be easily calculated using the formula, pI = pKa1 + pKa2/ 2 for molecules with two ionizable groups, while for molecules with more than two ionizable groups, pI is the average of two pKa values that are close to each other.