Copyright
Scott Merriman, Mark Pearcy
Learn the definition of isolationism. See examples of countries that have used isolationist foreign policy and the impacts of isolationism during WWII. Updated: 09/17/2021

Isolationism means to cut one's self off from the rest of the world as a nation. Sometimes the isolation was for a certain time period, like during a war, although it was sometimes for a period of decades or centuries and that isolation generally continued until the nation in question was forced open.

Many different countries have cut themselves off from the world at different times. Some did because they felt that it was best to develop away from the world. Others did so because they felt that the world had very little to offer. One example of isolationism is China. China cut itself off from the world in the fifteenth century and generally tried to stay isolated from that point forward. While China had sent out huge expeditions in the late 14th and early 15th centuries, no more expeditions sailed later on. Attempts to encourage trade from Europeans was met with resistance. China tried very hard to cut off its interactions with other countries, and made trade with them illegal. Part of this was due to a belief that China was better than the rest of the world. China maintained that isolation until the 19th century, when Britain forced its way into China. China did not regain full control of its own affairs under a unified government until the 1950s.

Japan is another example of a country that isolated itself. Japan in the late 16th and early 17th century forced out Christianity and removed most of the influence from Europe. The only ones allowed to remain were a few Dutch travelers and they were forced onto one island. The Dutch also had to promise not to send missionaries. Thus, the Dutch were only interested in trade and the influence was limited. The Japanese imposed this isolation because of fear of foreign invasion and influence. The nation of Japan remained mostly isolated until the later 18th century and then started to import material. The Japanese knew that they were behind but needed a spark for change. The United States (US), under naval commander Commodore Matthew Perry, forced their hand and Japan opened, ending their isolation.

European countries have also been isolationist. One prime example of this is Switzerland, which has been a neutral country during most of Europe's wars for the last few centuries. As a matter of fact, the last major war (outside of Switzerland) that the Swiss have been involved in was the Napoleonic Wars, and then they were invaded. The last wars that Switzerland was involved in occurred before the Reformation of the 16th Century, and Switzerland has had a policy of armed neutrality ever since. One sign of this is that the Swiss were even reluctant to join the United Nations, not joining it until 2002. Even after joining the UN, most Swiss thought that they were still fully neutral and that UN membership did not change this. The Swiss were somewhat unique in that they had a formal popular vote on the issue both in 2002 and early in 1986, when the result had been to oppose joining the UN.

The Swiss also were fully neutral during World War II, interning Allied airmen who wound up there or who bailed out over there (many airmen thought it was better to be a Prisoner of War (POW) in Switzerland than Italy or France if they thought they would not make it back to the Allied airbase). Switzerland has participated in some international efforts, particularly some aiming for philanthropic development, but the Swiss have largely aimed to stay neutral.

There were also examples of nations being isolationist by acting on their own rather than being isolationist in staying away from the world. The best known example of this is the state of Great Britain in the late 1800s. Great Britain was clearly involved in the world as this was the era of imperialism and Great Britain had colonies stretching from Egypt to South Africa in Africa and throughout the globe. Great Britain, though, aimed to act on its own rather than allying with either France or Germany, the two leading powers of the world in that day. Great Britain did not ally with Germany, seeing as how it aimed to be the top power in the world. France was allied with Russia, and Russia threatened the British pipeline of colonies that lead from Egypt to India. 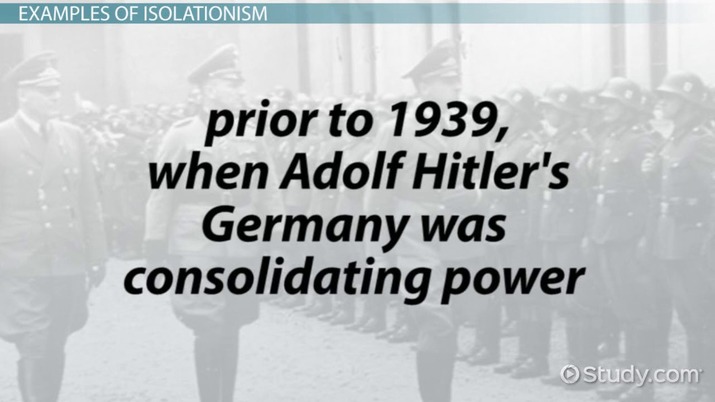 The US was isolationist during the early World War I and aimed to be neutral during World War I. Woodrow Wilson called for the US to be "neutral in thought and deed," and aimed to make the US this. However, the American people in general favored the British side and more loans were made to Great Britain. The US also generally favored the British approach of blockading with ships rather than the German approach of blockading with submarines. This isolation largely ended in 1917, when Woodrow Wilson convinced the US to join the war on the side of the British. However, when the US helped to win World War, it did not solve all of the problems that Wilson had said it would. Many in the US felt that they should have stayed isolationist. People believed either that the US had been duped into World War I or that staying neutral and allowing Europe to have to deal with its own problems would have been best. The US largely stayed out of world affairs after 1918 and did not join the League of Nations. Henry Stimson, Herbert Hoover's Secretary of State, did not recognize when foreign powers conquered lands and so tried to stop aggression that way.

When the Great Depression hit and world war threatened again, the US aimed to stay neutral. To do so, the US passed three Neutrality Acts. These on the whole banned arm sales and loans to people in conflict and pledged that the US would stay on the sidelines. When Hitler threatened Czechoslovakia, the US largely stayed silent and President Franklin D. Roosevelt (FDR) said little. It was not until the start of World War II in 1939 that many in the US started to rethink their stance, but even then many pledged to defend only America, in the so-called "America First" stance. Foreign policy was not a large part of the 1932 presidential campaign as the US was deep into the Great Depression, and FDR and Hoover agreed on many of the policies. Once FDR took power, he aimed mostly at America's issues and tried to stay out of foreign affairs. FDR's Secretary of State was Cordell Hull, who largely stayed out of Europe an affairs in the 1930s. The US ended their isolation formally in WWII after the Japanese attack at Pearl Harbor, even though the US was becoming steadily more involved before that.

United States Isolationism at other times

The United States has also been isolationist at other times. For instance, the US attempted to stay out of European affairs between its founding and the War of 1812. This policy was of limited effect, as neither France nor Britain allowed the US to trade with the other and Great Britain also was active on the North American continent. This policy of avoiding entanglements was suggested and promoted by Washington, but the US was weak and so it was a policy based equally in want and budget. The US also did not generally send its navy or armed forces abroad in early years, once again choosing to focus on the US. The US in the 20th century was neutral at times, but its isolationism was much less pronounced (other than in WWI and right before WWII) than in previous centuries.

Many nations in the past have been isolationist. These include China, Japan and Switzerland. The US attempted to do this in World War I and their failure brought more emphasis in the 1930s. The US was isolationist in the period leading up to World War II even while moving to become more involved once war broke out. It was the Japanese attack at Pearl Harbor that brought the US into the war. The US has been isolationist at other times, with the main example being the US neutrality during World War I.

Why did the US end its isolationism during WWII?

Why did the United States return to isolationism?

The US returned to isolationism in the early 1930s as the US thought that they had been tricked into World War I and that World War I had not been the "war to end all wars" that had been promised.

Isolationism means to cut yourself off somewhat from foreign affairs and at the very least promise to stay neutral if war breaks out.

What is an example of isolationism?

As example of isolationism was when Switzerland stayed neutral and did not get involved in World War I and World War II.

US After WWII: Politics, Culture & Counter-Culture

Laissez-faire Capitalism & the US Economy

What is a Supranational Government? - Characteristics & Purpose

The Red Scare of the 1920s: Definition, Summary & Causes

The Freedmen's Bureau's Impact on Education