What is the James-Lange Theory of Emotion?

The James-Lange theory of emotion is an analysis of emotions in modern psychology that discusses the origin and nature of emotions. Questions like what causes emotions, what is the purpose of emotions, and how to control emotions, are among the ideas that intrigued William James and Carl Lange. This physiological theory of emotion suggests that an emotional stimulus triggers a physical reaction and the interpretation of that reaction leads to emotion.

Humans are emotional beings and their feelings have evolved over the years to help them understand the world. Human emotions are triggered every day. Therefore, learning about emotions is an integral part of human life, as it assists people in managing their various feelings. There have been debates and pieces of research concerning emotions, and the main concern is investigating what this concept means in human life. The James-Lange theory notes that emotions are challenging for humans and it is critical to find effective ways of handling them.

How the James-Lange Theory Works

There are three steps to emotion under the James-Lange theory: 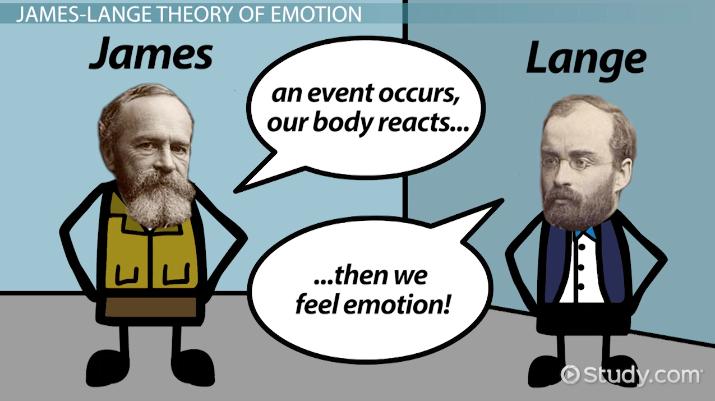 As established by James and Lange, external stimulus results in various bodily responses.

There are various theorists and psychologists that question the James-Lange theory of emotion. It is important to note that James-Lange did not conduct any empirical research to establish this theory; hence, their claims could not be disputed easily. Two psychologists who criticized James and Lange's work were Walter Cannon and Philip Bard. In the Cannon-Bard view of emotion, emotions occurred alongside bodily response contradicting the idea of James-Lange that the physical reaction comes first, then the interpretation of that reaction leads to emotion.

Another theory that criticized James-Lange's theory is the Schachter-Singer theory of emotion. This theory, also known as the Two-Factor theory, establishes that two conditions are required for one to experience an emotion. The first condition is that there must be an environmental condition that creates a bodily response, and secondly, there must be cognition of the physical activity (a conscious cognitive label). Thus, the Two-Factor theory indicates that emotions are consequences of cognitive labeling - emotions were not effective until a person identified them. The theorists behind this concept were convinced that emotions came as a result of cognitive appraisal. James-Lange, on the other hand, asserted that emotions were dependent on an independent stimulus.

Difference Between James-Lange and Schachter-Singer Theories of Emotion

In a related study, a team of scientists that studied physical responses using electrical stimulation determined that there is a part of the brain, known as the parietal cortex, that controls these actions. Different subjects under observation indicated that when their parietal cortex was stimulated, they felt the urge to move. The desire increased with the increase in electric current on this part of their brain. This indicates that the nervous system is responsible for most physical actions. In contrast to James-Lange's theory, the electrical stimulation established that bodily movements come from within a person.

James-Lange theory of emotion indicates that emotions are a result of the individual's interpretation of physical arousal. James and Lange used various examples to support this theory, like palpitations when one sees something scary leading them to feel afraid. In their view, crying caused sadness, not the other way around. However, later theories, such as Cannon-Bard and Schachter-Singer, and studies, such as the electrical stimulation study, have challenged this theory.

What is a strength of the James-Lange theory?

James-Lange was one of the earliest theories of emotion and it recognized that there was a link between emotional stimulus, physical reactions, and emotions.

How does the James-Lange theory work?

A person sees an emotional stimuli (they see an adorable puppy). The person has a physical reaction (smiling, skipping, laughing). They will interpret their physical reactions as indicating happiness and they will feel happy.

What is an example of James-Lange theory?

When a person receives shocking news and they start sobbing uncontrollably, they interpret their sobbing as sadness and feel sad.

How does the James-Lange theory explain emotion?

The James-Lange theory of emotion notes that a physical reaction comes first, then the interpretation of that reaction leads to emotion. The theory adds that human beings are emotional and this helps them to understand the world around them.