When Did Judaism Start?

Not only is Judaism one of the world's oldest major religious traditions that are still practiced today, it is also the foundation religion for Christianity and Islam. The term Judaism originated from the name ''Judah,'' the ancestor of the Israelite kingship as well as the name of the region where the Temple of Jerusalem was built. Dating the origin of Judaism is a difficult task for historians since the religion began as the beliefs of a small tribal people called the Israelites before it became an established religious tradition. According to the Torah, the sacred text of Judaism that contains the first five books of the Bible, this tribe began with Abraham, a nomad who was told by the god Yahweh that he would become the ancestor of a great nation. This promise is often called the Abrahamic covenant, one of many foundational covenants or contracts that appear in the Torah.

Although Abraham was the first patriarch, or founding father figure, there were other figures who played significant roles in the founding of Judaism. Abraham's grandson Jacob's story is recounted in the Torah as well. Jacob's name is later changed by Yahweh to Israel, the name their tribe takes. Jacob has 12 sons who become founders of their own tribes that are part of the larger tribe of Israel. The Torah traces the lineage of Abraham and the stories of his descendants, which continues with Moses, an Israelite who is raised by the Egyptians and helps free the Israelites from Egyptian slavery. Moses becomes the first major leader of the tradition and leads the Israelites through the wilderness for 40 years as they make their way to the ''Promised Land'' that Yahweh promised to the Israelites. According to the Torah, the Promised Land was ''a land flowing with milk and honey,'' (Exodus 3:8, NRSV) an image of the richness the Israelites could expect in their new home.

Historians struggle to date this narrative because, in the first place, there is little external evidence about whether any of these events were historically factual. If Abraham was a historical person, he might have lived as early as the beginning of the 2nd millennium BCE. Historians date the Exodus from Egypt, when Moses led the Israelites out of slavery, if historical, to around the 13th or 12th centuries BCE. The origins of the Kingdom of Israel, with Judaism as the main religion focused around the Temple of Jerusalem, date to around the 10th century BCE, and some parts of the Torah were written around this time period as well. 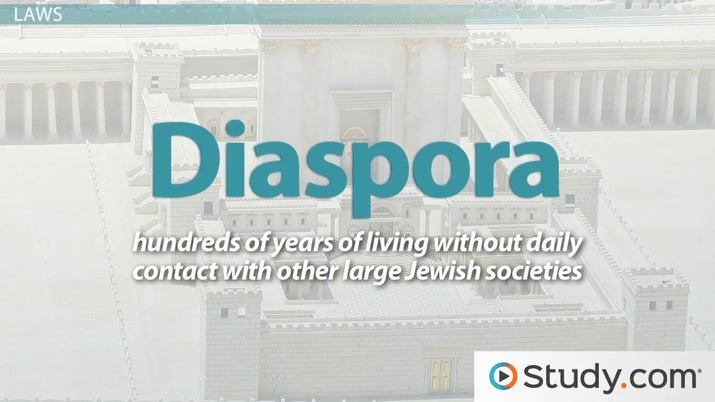 Try it now
Back
Coming up next: The Hebrews and Their Beliefs

Religious traditions usually have distinctive sacred texts, holidays, rituals, and places that are considered holy or special for the community. In ancient Israel, Jewish religion was centered around the Temple of Jerusalem, a holy building that was where Jews could worship Yahweh. After the destruction of the Temple, worship was congregational and held in synagogues, which are still found around the world today. Synagogue worship is often focused on reading sacred texts. The two most important sacred texts or scriptures for Judaism are the Tanakh, which is also called the Hebrew Bible (nearly identical to the Christian Old Testament), and the Talmud, which contains commentaries on the Tanakh. The Tanakh contains the Torah, the texts that establish the laws of Judaism. Although there are numerous features of Judaism that impact Jewish culture, laws are predominant, as they impact everything from worship to eating to prohibitions on daily activities.

Shabbat, or the Sabbath, is a weekly holy day observed by many Jews, which occurs from sunset on Friday to sunset on Saturday. Shabbat is a day of rest that symbolizes Yahweh resting on the seventh day after creating the world in the Jewish creation story. In addition to the weekly Shabbat, many Jews also celebrate the major holidays of:

Despite Judaism's tie to the Promised Land of Israel, there have been many times throughout history that the Jewish people were conquered or driven out of their homeland. Each diaspora, or dispersion of a people from their homeland, had different and lasting effects. In the years leading up to 722 BCE, when the Neo-Assyrian Empire conquered the Northern Kingdom of Israel, Israelites were exiled from their homeland to find new places to live. Many went to the Southern Kingdom of Judah (the region that contained Jerusalem after the United Kingdom of Israel divided), but others scattered around the region.

The Babylonian Exile was significantly more disastrous for Judaism. In 586 BCE, the Neo-Babylonian Empire conquered the Southern Kingdom of Judah, not only sending the Jews into exile but also destroying their Temple. Since Judaism had never functioned without a Temple (or Tabernacle during its early period), this presented a religious and identity crisis. During the Persian Empire's rule of the area, the Jews were allowed to return--though they were now not an autonomous nation--and rebuild their Temple. However, in 70 CE, after the Roman Empire had conquered much of the surrounding areas, the Temple of Jerusalem was again destroyed and the Jews were sent into exile once again.

The region of Israel and Judah did not fall back into Jewish control until it was officially declared the State of Israel in 1948 CE. Due to territory conflicts over the Temple Mount, the Temple has not been rebuilt since its destruction in 70 CE. During the near two millennia between the exile and the founding of the State of Israel, many Jewish people only had opportunities for semi-permanent living. Although Christianity was a religion that branched from Judaism, many Christian rulers and people persecuted Jews for centuries, especially during the Crusades of the Middle Ages. During this time, Jews were housed in European neighborhoods called ghettos to separate them from the ruling society and provide a sense of control over their lives.

This notion was carried even further during the Holocaust, called Shoah (''catastrophe'' or ''destruction'') in Judaism, which was a period in the early 1940s when Jews were systematically killed. The Nazis, led by Adolf Hitler of Germany, put economic, social, and political pressure on the Jews leading up to the Holocaust. Beginning in the 1940s, they started taking Jews to concentration camps around Europe before eventually experimenting on and killing many of them by a variety of means.

Judaism has had a long and impactful history, both as a world power and as a persecuted religious community. Beyond Judaism's significance in historical events, Judaism has played an important role in other major world religions. Jesus, the founder of Christianity, as well as many early Christian writers and thinkers in the 1st and 2nd century CE, were Jewish. Because of this, Christian teachings have a solid Jewish foundation, with laws like the Ten Commandments being nearly as if not as important as Christian teachings. Similarly, Islam, beginning in the 7th century CE with the Prophet Muhammad, considered itself an extension of Jewish and Christian teachings. Many of the stories in the Tanakh are essential components of Muslim scripture while others are reinterpreted by Islamic sacred texts. Today, Judaism is practiced by a small number of people, totally less than one percent of the world's population. However, Christianity makes up about 31 percent and Islam about 24 percent of the world's population, demonstrating Judaism's lasting impact on religious society and culture.

Judaism is one of the world's oldest religions, with origins as early as the 2nd millennium BCE. Judaism became a religion while the early tribal people called the Israelites escaped from Egyptian slavery, traveled in the wilderness for 40 years, and eventually reached the region that their god Yahweh had promised them. This ''Promised Land'' was considered a land that was rich with milk and honey. The Jews inhabited this area for over a thousand years, during which time they wrote the Tanakh, the Jewish sacred text that outlined the history of their people as well as the many laws that impacted their culture. One of the important laws that is still practiced by many Jews today is observing Shabbat, the day of rest.

With new political powers on the rise around Israel, the Jewish people were eventually conquered and exiled from their homeland in a series of diaspora, a dispersion of people from their homeland. Jews were often persecuted and controlled after this. The formation of ghettos in Medieval Europe gave rulers power over Jewish life and community. This was taken even further during the Holocaust when Adolf Hitler and the Nazis committed genocide and killed millions of Jews. Despite its rough history, Judaism has had a tremendous impact on cultures and religions around the world, including the founding of Christianity and Islam.

How did Judaism impact society?

Judaism, as the religion of ancient Israel, impacted regions around it in the ancient world. It had an even greater impact when Jesus, a Jewish teacher, founded Christianity, which became the world's largest religion and was the official or main religion of many nations and empires. Because of this as well as Judaism's influence on Islam, Judaism has left a lasting impact--such as the importance of the Ten Commandments--on the laws, traditions, and cultures of many societies.

What are the significant beliefs of Judaism?

Judaism today is a primarily monotheistic religion, meaning that Jews believe in and worship only one god, which is Yahweh. Jews also follow the many laws outlined in their holy book called the Tanakh, which include food laws and rules for observing Shabbat, the day of rest.

Brahmanism Beliefs & Traditions | What is Brahmanism?

What is the Quran? | What is Hadith?

Judaism Moral Code & Ethics | What are the Values of Judaism?