Kinetic Molecular Theory (KMT) describes the experimentally discovered behavior of particles. KMT is most often referenced in relation to the behavior of gases, but it could also be applied to solids and liquids.

Molecules that make up a solid are thought to be very relatively tightly packed molecules. These molecules will gently sway in place without changing physical locations. In general, they are not affected by the shape or volume of the container that is holding them.

Liquids have a bit more space in-between each molecule than solids. Liquid molecules also move a bit faster than solids, and they will simply flow past other molecules within the container. As a result, liquids will tend to take the shape of the container which holds them, but the volume of a liquid is not typically affected by the container.

Gas molecules have the most space in-between molecules. These molecules also move the fastest out of the three phases (the three phases being solid, liquid, and gas). With the speed at which gas molecules move, they are able to overcome any attractive forces that would hold the molecules together in close proximity. As a result, gases move about wildly and take on both the shape and volume of the container that holds them.

What are the Assumptions of Kinetic Molecular Theory?

There are several basic assumptions that have been made about gases (through experimentation). The following list details each of the five assumptions which are commonly accepted. These five assumptions may sometimes vary in number depending on the source of the list, because a few of these assumptions can be further consolidated and combined with some of the others. 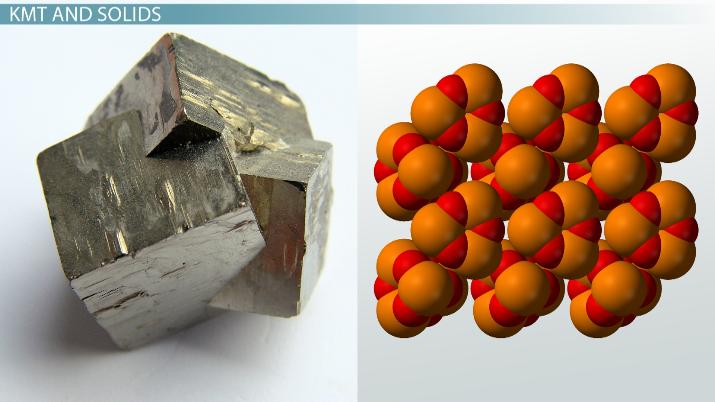 Through the use of KMT, a few different laws have been created to help quantify the relationship between the measurable characteristics of gases. The three laws are called the ideal gas law, Charles' law, and Boyle's law. These three laws relate the pressure, volume, temperature, and amount of a gas.

This math equation would be written out as:

An ideal gas assumes that particles (a.) do not attract or repel one another and (b.) take up no space (in other words, have no volume). No gas is truly ideal, but the ideal gas law does provide a good approximation of real gas behavior under many conditions.

Charles' Law focuses on the relationship between the temperature and the volume of a gas. This relationship has been found to be a direct relationship when all other factors are held constant. The equation is as follows:

T1 = the starting temperature of the gas, measured in Kelvin

V1 = the starting volume of the gas

T2 = the ending temperature of the gas, measured in Kelvin

V2 = The ending volume of the gas

KMT is also able to make a prediction between the pressure of a gas and the quantity (amount of moles) of that gas. The more moles of gas that are present in a container, the higher the pressure. This can best be visualized when pressure is thought of as the number of collisions that the gas particles have with the walls of the container. As more gas is put into a container, those molecules experience more collisions, and therefore the pressure in the container would be higher.

Kinetic Energy is the measurement of the magnitude of the motion of an object. It's usually recorded in Joules. This amount of motion of an ideal gas can be calculated with the equation:

KMT plays an important role in our everyday lives. Here are a few real world examples of KMT acting around us:

Kinetic Molecular Theory has several key points which describe the motion of molecules. Solid particles are most often pictured as tightly compacted molecules with strong attractive forces between each atom. These molecules would slowly sway in place. They also contain the least amount of kinetic energy.

Liquid molecules have an average amount of intermolecular attraction. These molecules will flow past one another due to the reduction in attractive forces.

Gas molecules contain the greatest amount of kinetic energy among the three phases and therefore contain little to no attraction between its particles. Gas molecules play such a large role in everyday life that, through experimentation, scientists have formed the five key assumptions presented below:

KMT can also be described mathematically through the use of the ideal gas law (PV=nRT), Boyle's law (P1V1=P2V2), and Charles' law(T1/V1=T2/V2). The kinetic energy of the molecules can also be calculated if necessary.

In this activity, students are going to be looking for substances in their normal environment and describing how the kinetic molecular theory would apply. Students should choose two solids and two liquids, describe the motion of the particles in each and draw a picture.

In this activity, you're going to be applying the kinetic molecular theory to materials you find in your everyday life. To complete this activity, you'll be finding two solids and two liquids in your life. For each one, you'll describe how you think the molecules are moving, draw a sketch of their movement and then describe which intermolecular forces might be at work. For the last part, you can use the internet to see which intermolecular forces are at play for which type of substances.

What are the five main points of the kinetic molecular theory?

What does the kinetic molecular theory state?