What is Lactic Acid Fermentation?

Where Does Lactic Acid Fermentation Occur?

The lactic acid fermentation occurs in certain animal cells and bacterial organisms. In animal cells, aerobic respiration is generally preferred - this process doesn't involve lactic acid fermentation. However, in conditions where the oxygen supply is insufficient - primarily in muscle tissues, during periods of strenuous exercise - cells must undergo anaerobic respiration in order to adequately meet the demand for energy. This process of anaerobic respiration produces lactic acid as a byproduct, which accumulates in the muscle tissues. The increased acidity is responsible for the burning sensation and weakness you feel in your muscles during exercise, and this is believed to help prevent you from overworking your muscles. Contrary to popular opinion, however, lactic acid is not the cause of delayed-onset muscle soreness (i.e. the soreness you might feel the day after an intense workout.)

After the muscle activity is over, lactic acid is removed from the muscle tissue through the bloodstream. It is then sent to the liver, where it undergoes chemical reactions to form pyruvic acid, which is used to produce additional energy as ATP.

While some LABs are strictly anaerobic, others can switch between the two processes depending on the availability of oxygen. 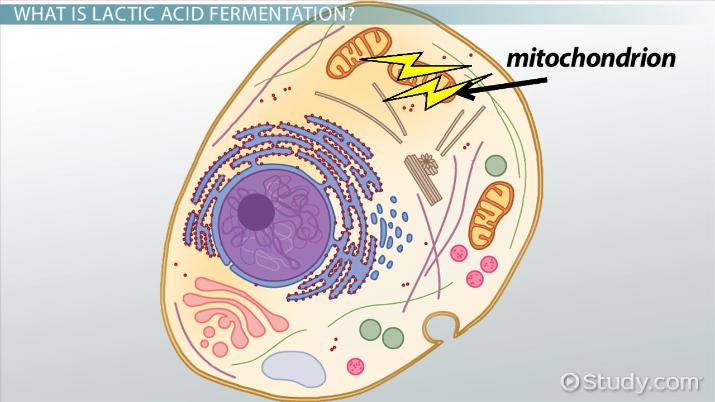 Try it now
Back
Coming up next: Mitochondria Project Ideas

The commonly used equation for Lactic acid Fermentation is:

While this equation highlights the lactic acid fermentation reactants and final products, the process actually occurs in two steps.

The first process is called glycolysis (which is also a part of the aerobic respiration pathway.) Glycolysis involves the conversion of glucose into 2 molecules of pyruvic acid, creating 2 ATP and 2NADH (from ADP and NAD+) in the process. Because glycolysis does not require oxygen, it is considered an anaerobic process.

In the next step, each molecule of pyruvic acid is converted into lactic acid. As a byproduct, 4 NAD+ is generated, 2 of which go back to continue the glycolysis pathway.

Based on these steps another way to write the Lactic Acid fermentation equation would be:

Simplifying this equation by focusing on the net gain of products gets us back to the initial equation:

This pathway of lactic acid fermentation is also called the homolactic pathway Through this process, glucose is broken down to generate energy and lactic acid. This pathway is most commonly employed by the lactic acid bacteria Pediococcus and Streptococcus, as well as some species of Lactobacilli.

Apart from glucose, other sugars such as lactose and maltose can also be used in lactic acid fermentation.

There exist two other fermentation pathways, apart from the homolactic pathway, that produce lactic acid as their end product. These are the heterolactic pathway and Bifidium pathway. Their usage varies between different species of lactic acid bacteria, and each pathway produces different byproducts.

The equation for the heterolactic pathway is similar to the homolactic pathway. However, instead of 2 lactic acid molecules, only one lactic acid molecule is synthesized, along with a molecule each of ethanol and CO2 (Carbon Dioxide). This pathway also only generates 1 ATP molecule, rather than of 2. Lactic acid bacteria in the genus Leuconostoc and some species of Lactobascilli employ this method. The equation for the heterolytic pathway is:

The second alternative pathway is the Bifidium Pathway, or Bifidobacterium shunt. This pathway produces acetate and lactate as byproducts, and is employed by bacteria of the genus Bifidobacteria. Its equation is:

Lactic Acid Fermentation has several culinary uses in human society, many of which derive from ancient culinary and preservation techniques. Some example of foods that utilize lactic acid fermentation are:

These foods mostly employ lactic acid bacteria from added cultures or from the air, in order to preserve foods, make them healthier, or enhance their flavor. Culturing bacteria usually involves providing a food source and often uses salt to create environmental conditions that favor the LABs. The lactic acid produced by these bacteria creates unfavorable environments for other microorganisms, which allows these fermented foods to be preserved for longer without the risk of rotting and causing food-borne illnesses. The LABs also partially digest the food making it easier for our bodies to digest and absorb nutrients. This is why fermented foods are used by some cultures as baby food. Many dishes also employ lactic acid fermentation as a means of enhancing taste, often by imparting a sour taste (eg. sauerkraut and kimchi), creating texture by producing bubbles (eg. sourdough bread) or causing chemical reactions that lead to changes in flavor (e.g. miso and soy sauce.)

Lactic acid is produced on an industrial scale through chemical manufacturing, as well as, biological manufacturing (using microbes that carry out lactic acid fermentation.) This lactic acid has several uses in the cosmetic, food, and pharmaceutical industries. This includes uses as a food preservative, a skin treatment, and as a reactant to create drugs. Lactic acid is also being studied for its ability to polymerize and form Poly Lactic Acid, a renewable and biodegradable plastic.

Alcoholic fermentation, also called ethanol fermentation, is another form of anaerobic respiration. It is similar to lactic acid fermentation in that both processes occur in the absence of oxygen, and generate heat and 4 molecules of ATP. Furthermore, both are two-step processes, beginning with the same chemical reaction - glycolysis.

The chemical compound - lactic acid - was first discovered in 1780 by a Swedish chemist, Carl Wilhelm Scheele. Because the compound was isolated from stale milk it was named lactic acid, after the latin word for milk - lact. The presence of this compound in muscles was discovered, in 1808, by Jons Jacob Berzelius - another Swedish Chemist. In 1857 Louis Pasteur finally hypothesized that lactic acid was produced as a fermentation metabolite by microorganisms and was not a natural component of milk, as was previously suggested. In 1881, the first industrial-scale production of lactic acid began, making use of lactic acid fermentation in microbes.

Lactic acid fermentation is a form of anaerobic respiration (or fermentation), that generates energy in the absence of oxygen. This process occurs in certain types of animal cells and bacterial species, and it earns its name because of the lactic acid it produces as a byproduct. In most animal cells aerobic respiration is generally preferred, however, fermentation commonly occurs in muscle tissue during periods of intense activity, and in red blood cells. Lactic acid bacteria (LABs) carry out this process to produce energy in anaerobic conditions, as well as, eliminate competition by decreasing the pH of its environment.

The process involves two steps, starting with glycolysis to convert glucose into pyruvic acid. The pyruvic acid is then converted into lactic acid. The general chemical equation for lactic acid fermentation (i.e. through the Homolactic pathway) is -

There are alternate pathways of lactic acid fermentation, that differ in their byproducts (in addition to ATP and NAD+) -