Lamb to the Slaughter Short Story

Roald Dahl wrote "Lamb to the Slaughter", one of his most well-known short stories, in 1953. Ian Fleming, author of the James Bond series, purportedly suggested the story's plot to Dahl. 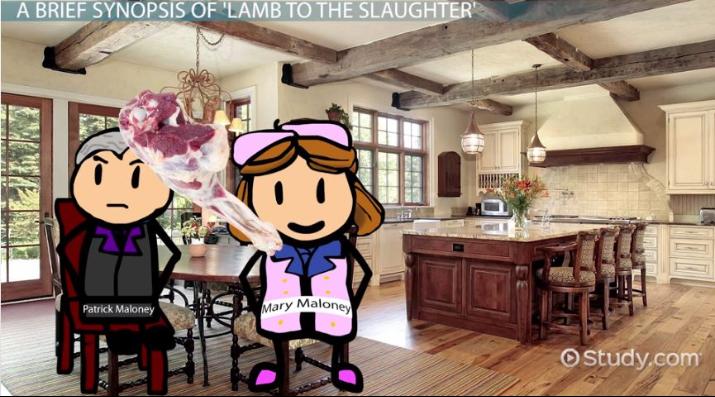 Lamb to the Slaughter: Meaning and Context

The story's title refers to the widely used phrase "like a lamb to the slaughter", meaning an innocent person being unknowingly led to his or her demise. The expression might be used, for example, when someone is called into a meeting to be fired. The person, innocent of any wrongdoing and unaware of the meeting's reason, could be said to enter the meeting like "a lamb to the slaughter."

The phrase has its origins in the Bible, specifically in the Old Testament books of Jeramiah and Isaiah. Jeremiah 11:19 says, "But I was like a lamb or an ox that is brought to the slaughter; and I knew not that they had devised devices against me, saying, Let us destroy the tree with the fruit thereof, and let us cut him off from the land of the living, that his name may be no more remembered." The phrase also appears in Isaiah 53:7: "He was oppressed, and he was afflicted, yet he opened not his mouth: he is brought as a lamb to the slaughter, and as a sheep before her shearers is dumb, so he openeth not his mouth." The title may also allude more generally to the New Testament story of Jesus, an innocent man who is killed by crucifixion.

Lamb to the Slaughter Summary

As the "Lamb to the Slaughter" short story opens, a pregnant Mary Maloney is waiting for her husband Patrick to come home from work. She has turned on the lamp beside Patrick's chair and has collected the ingredients for his evening cocktail. After Patrick arrives and settles into his chair, Mary notices that he guzzles the drink she prepares for him. Patrick is a policeman, tired from the day's work, and Mary offers to bring his slippers for his aching feet. The couple usually goes out to eat on Thursdays, but Mary offers to prepare dinner on this Thursday night since Patrick is exhausted. He declines the offer and asks her to sit down. Patrick then delivers some shocking news to Mary.

Patrick's words are not revealed in the story, but he is apparently planning to leave his pregnant wife: "It didn't take long, four or five minutes at most, and she sat very still through it all, watching him with a kind of dazed horror as he went further and further away from her with each word." Patrick then says that he will support her financially, but he hopes that she won't make a "fuss" because that would be bad for his job.

Mary is horrified by Patrick's words, but she slips briefly into denial, thinking that if she just behaved normally the problem would just go away. Mary decides that she will prepare dinner, so she removes a frozen leg of lamb from the freezer in the cellar. When she returns with the lamb, he tells her not to cook dinner because he is going out. After Patrick reveals this plan, Mary walks behind him and hits him in the head with the leg of lamb.

Once she realizes that she has killed her husband, Mary suddenly comes out of the shock she has been experiencing. She puts the lamb in the oven to cook and begins to think of an alibi. She decides to go to the local grocer's, but first she practices what she will say. She knows she needs to make this visit to the grocer appear to be just like her regular trips to the store. Mary goes to the store and asks Sam, the grocer, for vegetables. She says that she is cooking dinner for Patrick, and asks Sam's opinion on cooking frozen lamb. Sam suggests cheesecake for dessert, which Mary purchases, saying, "Perfect. He loves it."

When Mary returns from the store, she calls the police and reports that she has found her husband dead. The police arrive, determine that Patrick has been struck in the head, and begin to search for the murder weapon. Mary tells the officers that she found her husband when she returned from the grocery store. An officer talks to Sam, the grocer, who confirms that nothing seemed unusual when Mary came to his store.

The police continue their investigation by taking fingerprints and continuing to look for the murder weapon. They believe an object such as a heavy metal vase was used to kill Patrick, but they find nothing in the house that could have been used to kill him. After Patrick's body is removed, one of the officers notices that the meat is still cooking in the oven. Mary says that she cannot eat, but she offers the lamb to the assembled policemen who have been working through their regular dinner time. They reluctantly agree to eat the leg of lamb without realizing that they are consuming evidence. As they eat, the policemen continue to speculate on the whereabouts of the weapon. It is "probably right under our noses," a policeman says as he eats the lamb, while Mary quietly laughs to herself.

Lamb to the Slaughter Setting

Most of the events in "Lamb to the Slaughter" are set in the Maloney home. Mary and Patrick's home is a scene of 1950s domestic tranquility. Mary is a pregnant housewife, who waits with her sewing for her husband to return from work. She makes certain that he enters a home with everything set to his liking; she turns on the lamp beside his favorite chair and is prepared to make him a drink when he comes home from work. The only other location in the story is the grocery store, where Mary cements her alibi with Sam, the grocer.

Lamb to the Slaughter Characters

In addition to several unnamed police officers, "Lamb to the Slaughter" characters are

Lamb to the Slaughter Conflict

The conflict in 'Lamb to the Slaughter' is between Mary and her husband Patrick. When Patrick announces his intention to leave Mary and their unborn child, she resolves the conflict by killing Patrick with a frozen leg of lamb.

Lamb to the Slaughter Short Story Analysis: Thematics and Symbolism

In "Lamb to the Slaughter", Dahl examines the difference in appearance and reality. The Maloney's home is a picture of domestic bliss, with Mary spending her days keeping house and sewing. The reality, however, is apparently quite different since Patrick comes home and reveals that he is planning to leave his wife.

Mary seems to be a passive wife whose only purpose is to meet her husband's every need. Once Patrick says that he plans to leave her, however, Mary abandons the illusion of passivity by cracking Patrick's skull with a frozen leg of lamb and then cleverly planning to cover up the crime.

Mary Maloney is shown to be a loving caregiver to her policeman husband when the story opens. She carefully tends to her tired husband, Patrick, when he comes home from work. Mary is at first portrayed as a stereotypical 1950s housewife, cooking, sewing, and waiting for her baby's birth. Divorce is unthinkable to Mary, in part because she is pregnant and has no way to support herself and the child. In addition, there was a stigma associated with divorce in the 1950s, and Mary had clearly done everything she could to ensure that her husband was happy. When Patrick says he is going to leave her, Mary feels betrayed. She does not kill Patrick in a rage, however, but rather calmly strikes him with the frozen lamb. She then carefully sets about to conceal her role in the crime.

Food, which ordinarily sustains life, is actually used to destroy life in this story. In addition, the food Mary buys at the store, is used to cover up the murder.

At the beginning of the story, Mary appears to be the lamb that is being led to the slaughter when Patrick says he is leaving. Though she may have been unaware of his intention, Mary soon proves that she is not the innocent lamb, however, as she kills her husband with the frozen lamb. Thus, Patrick becomes the "lamb to the slaughter." He is completely unaware that she will literally slaughter him with a leg of lamb.

Lamb to the Slaughter Publication

"Lamb to the Slaughter" was first published in the September 1953 issue of Harper's Magazine.

Lamb to the Slaughter Adaptations

'Lamb to the Slaughter' has been adapted to the screen several times. One well-known adaptation stars Barbara Bel Geddes in Alfred Hitchcock Presents. The story has also been presented in Tales of the Unexpected and a Bollywood film titled Haseen Dillruba. In addition, there is a Hindi adaptation titled Bloody Swine.

Roald Dahl published "Lamb to the Slaughter" in Harper's Magazine in 1953. The short story concerns Mary and Patrick Maloney. When Patrick tells his pregnant wife Mary that he intends to leave her, she murders him by striking his head with a frozen leg of lamb. She then ingeniously covers up the crime. She buys vegetables at the store as if nothing is amiss, then feeds the lamb to the policemen who come to investigate the murder. There are several screen adaptations of Dahl's famous short story, notably a version that appeared in Alfred Hitchcock Presents.

"Lamb to the Slaughter" Analysis

For this activity, you will critically analyze Roald Dahl's short story, "Lamb to the Slaughter." Make sure to answer all questions thoroughly and in complete sentences. Also, use specific information from the short story to support your responses.

Why did Mary kill her husband in Lamb to the Slaughter?

Mary kills Patrick after he announces his apparent plan to leave her. She is pregnant and unable to support herself, and she is unwilling to accept the stigma of divorce.

What does the lamb symbolize in Lamb to the Slaughter?

The lamb ordinarily suggests innocence, but in "Lamb to the Slaughter" the lamb becomes the weapon that Mary uses to kill Patrick.

Is Lamb to the Slaughter a true story?

"Lamb to the Slaughter" is not a true story. The idea for the story originated with Ian Fleming, who suggested the plot to Roald Dahl.

What is the main message of Lamb to the Slaughter?

The main message of the story is that things are not always as they appear. Mary appears to be a dutiful housewife, but she is actually capable of murder.

They're Made Out of Meat: Summary, Theme & Analysis