Jada Bradley, Peggy Olsen
What is a latchkey kid? Read about latchkey children. Learn about the historical usage of the term. See a list of the characteristics of latchkey kids. Updated: 09/24/2021

What is a Latchkey Kid?

Experts do not agree on the true definition of a latchkey kid, but the term generally refers to a child who routinely returns home on their own and uses a key to lock or unlock the door of their residence. Once this child is inside the home, they are alone and without adult supervision. Some definitions include not only children with no adult there to see them to and from school, but also those who may have a hybrid situation that includes some supervision. For example, some children may go to an after school program and then return home on their own. Others may have a neighbor who checks on them but these children are mostly unsupervised until their caregivers' return home.

In 2011, census data indicated that there were about 4 million children in the United States who were not supervised for an average of 6 hours per week, meaning that there were children who spent more than 6 hours a week with no adult supervision. 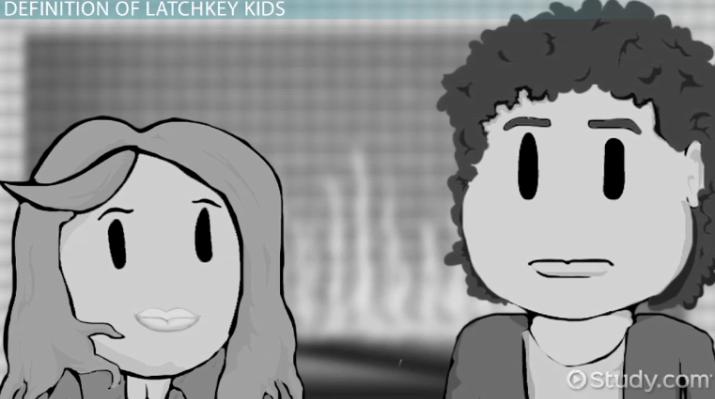 While there have been studies which concluded that being a latchkey kid was not detrimental to child development, there is still a lot of concern about children being responsible for caring for themselves. Some experts think that latchkey children tend to exhibit signs of depression and low self-esteem. However, there may be factors beyond regular lack of adult supervision contributing to these effects.

On a positive note, latchkey kids of any age can:

Children up to age thirteen are considered latchkey children (after thirteen, they are teenagers and presumably will not need as much adult care). A child may still be considered a latchkey kid if they are accompanied by an older sibling who is also under the age of thirteen. In 1988, the New York Times reported that a number of studies at the time found that fifteen percent of children between the ages of six and nine and forty-five percent of children between the ages of nine and eleven in the U.S. did not have an adult at home after school.

Families with latchkey children vary widely in financial circumstances. An increase in household income does not necessarily translate to an increase in that household's childcare spending. It is also not certain that parents at any socio-economic level will make sure their children are involved in organized after school activities with adult supervision.

There is evidence that, though children from single-parent families or low income households spend time at home on their own, they may spend less time alone compared to children of higher socio-economic status. It is possible that parents of higher socio-economic status are less concerned about the safety of their neighborhoods and may feel comfortable leaving their children at home by themselves for longer periods of time.

In the mid-1990's it was estimated that about 18% of children in elementary school returned home to an empty house once school was over. The After School Education and Safety Act of 1997 (which passed in 1998) helped to reduce the number of children who stayed home alone by providing funds for after school programs.

It is believed that a 1944 documentary first used the term latchkey kid to describe children who came home to empty houses. The media took note of the practice in the World War II era, when more children had to care for themselves since their parents were either participating in the war effort or working to keep the family financially stable. The typical latchkey kid at the time may have had a father who was fighting in the war and a mother who had to start working to make up for the income the father could not provide because he was in the armed forces.

The Effect on Children

Being a latchkey kid can have a profound social and psychological effect on the way a child develops. In fact, some mental health experts have suggested that the prevalence of latchkey kids in the 1980s and 1990s affected those children's eventual approach to their own parenting, leading them to hover over their children and spend a lot more time with them than did parents of previous generations. Being alone can lead a child to be tempted to do things they might not do if an adult were around.

Latchkey kids are at risk of:

Unhealthy habits and behaviors, such as:

Negative psychological effects, such as:

While being a latchkey kid can have some unhappy results for some, there are children who gain a sense of freedom and self-sufficiency without developing unhealthy habits or behaviors.

Latchkey children who return to a home without the presence of an adult may experience loneliness, a feeling that with time could intensify and become burdensome. Some children are completely alone while others may be with pets, siblings, or have friends over. Nevertheless, children feel more secure and protected when a caregiver is present. Having a clear understanding of the reasons (e.g., employment) for a caregiver's routine absence may ease a child who will be alone, but that does not mean they do not feel lonely.

What these children choose to do with their time alone can vary. Experts are concerned about what some of these children may do to relieve the feeling of being abandoned. They encourage parents to call and check in on their children if possible. In some areas, people set up hotline numbers for latchkey kids to call and talk with someone.

In addition to facing dangers from other people, children may also hurt themselves by accident or be harmed in some other way that does not involve "stranger danger". Unsupervised children can cut themselves preparing food, accidentally start fires, or be injured while playing. Parents may not realize the possible threats to their children that exist in their own homes.

The United States does not have a national policy regarding the age at which a child may be left home alone. Any regulations about the age at which a child may commute by themselves or be at home alone are found at the state and local level. In addition to this, parents are subject to an unofficial court of public opinion. In one instance in Maryland, parents allowed their children to walk together without adult supervision; an observer felt the children were in danger and contacted the police.

States with no age restrictions on children being left alone include: Arizona, Maine, and Virginia.

Latchkey children are children who routinely take care of themselves at home when a caregiver cannot be there with them, usually before or after school. Although this practice still exists, latchkey children were discussed in the media more often in the 1980s and 1990s. Parenting styles and social customs have since changed and it is less acceptable to leave children unsupervised in the early twenty-first century.

At what ages can a child be considered a latchkey kid?

Does the latchkey practice exist today?

Although the term "latchkey kids" is not used very often in the twenty-first century, there are certainly children who fit the description.

What is the latchkey generation?

Although the term "latchkey kid" was coined in the 1940s, when people talk about the latchkey generation today, they are usually referring to people in the group also known as Generation X (people born between about 1965 and 1980).

Bereavement Overview & Stages of Mourning | What Is Bereavement?

What is a Technological Change? - Definition, Advantages, Impact & Examples

Mesosystem Overview & Examples | What is a Mesosystem?

Family Characteristics, Functions & Types | What is a Family Relationship?

What is a PTA? - Definition & Role