What is Law Enforcement?

The term "law enforcement" refers to the collection of agencies that are charged with protecting the citizens and communities, maintaining the peace, and enforcing the laws of the different states and municipalities around the United States. Because that is such a large-scale operation, the task of law enforcement is divided by jurisdictions: federal, state, county, and local cities and towns. The largest agencies are federal agencies, which are responsible for the country as a whole. State agencies work at the state level, while county and city agencies handle situations in those communities. 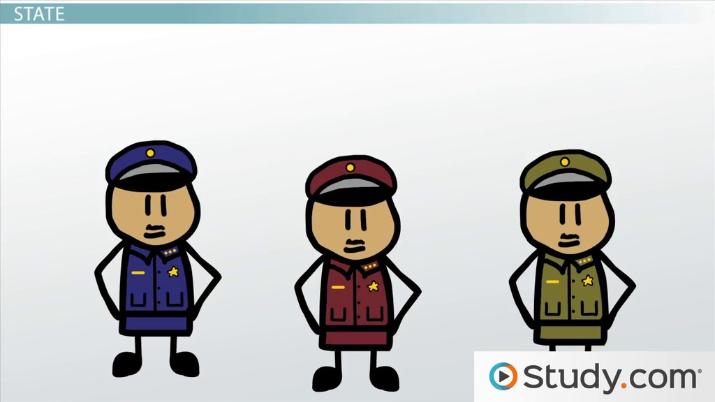 Try it now
Back
Coming up next: Federal Law Enforcement: Agencies & Responsibilities

There are different levels of law enforcement depending on the type of crime and where it was committed.

The main differences between the levels of law enforcement have to do with jurisdiction. While police officers are responsible for their own cities and communities, state patrol officers are responsible for enforcing state laws and can handle crimes that happen across city and county lines. For example, local police officers will usually handle traffic violations and accidents that happen within their cities and communities, but state patrol officers will often handle incidents that occur on interstate highways. State law enforcement agencies also step in when crimes occur in places where there is no local police force, such as in certain small towns and unincorporated areas.

Federal agents work on a much larger scale, handling crimes that violate federal laws. They also step in when crimes are committed that cross state lines, such as kidnappings where the victim is transported from one state to another and serial bank robbers who commit crimes in multiple states. Federal agents usually work within different organizations depending on their focus. The Drug Enforcement Administration focuses on drug crimes, such as interstate drug trafficking and the importation of drugs into the country. The Federal Bureau of Investigation handles crimes that violate federal laws, such as domestic terrorism and bank robberies.

Within each level of law enforcement, there is a wide variety of different types of personnel and job positions:

Uniformed Officers- These officers typically work at the municipal, county, and state levels. They are usually the first line of responders to assist citizens in need and work to maintain the peace in their assigned jurisdictions. Typical duties for uniformed officers include patrolling routes (both on foot and in marked patrol vehicles), handling traffic violations and vehicle accidents, directing traffic, and assisting in providing first aid to injured citizens. This is typically considered an entry-level law enforcement position. Unformed officers include:

Plainclothes Officers- As their title suggests, plainclothes officers are not in uniform. They do not typically patrol routes and instead work more in the investigation of crimes, including questioning witnesses and suspects and making arrests. They may also work undercover and many of them specialize in various departments, such as homicide, robbery, or drug enforcement. Plainclothes officers include:

In addition to these officers and agents, there are also many legal and support personnel positions. Additional personnel on the law enforcement side include those who aid in criminal investigation, such as crime scene technicians (officers who examine crime scenes and collect evidence) and forensic pathologists (usually doctors who examine the bodies of deceased victims to help determine information such as cause and manner of death). Law enforcement personnel also include corrections officers who work in jails and state and federal prisons. Those who work in the court system include bailiffs, court reporters, lawyers, prosecutors, and judges.

Within the field of law enforcement, there are numerous careers and jobs. The entry-level positions are usually the uniformed officers, who work directly with the public, patrolling their jurisdictions, handling traffic violations, and maintaining the safety and peace in their communities. Plainclothes officers work on investigating crimes committed within their jurisdictions, and federal agents handle large-scale crimes that occur at the federal level. There are also many legal and support personnel within every level of law enforcement.

What are the 5 levels of government law enforcement agencies?

What are the different law enforcement jobs?

There are several different levels and types of law enforcement jobs. The most common of these are uniformed police officers, plainclothes officers, and federal agents, though there are also numerous support personnel jobs as well.

Plaintiff & Defendant in Court | People, Layout & Roles in a Courtroom

Plaintiff & Defendant in Court | People, Layout & Roles in a Courtroom