Copyright
Benjamin Sirulnik, Saranya Chatterjee
Understand the definitions of the Law of Mass Action. Learn more about equilibrium constants when applying this law and see its real-life applications here. Updated: 03/19/2022

The law of mass action states that the rate of a chemical reaction is proportional to the active masses of the reacting substances at a constant temperature. Active masses are substances that are actively reacting within a chemical reaction. For example, in a closed bottle of soda, there is constant interconversion between carbonic acid (H2CO3), bicarbonate (HCO3-), and carbon dioxide (CO2) gas. Since all three substances are reacting, they are active masses in the reaction. When the cap of the soda bottle is removed, carbon dioxide gas continuously leaves the liquid. Once a carbon dioxide molecule has left the liquid, it is no longer an active mass, and therefore no longer affects the reaction rate by the law of mass action.

Some reactions occur only in the gaseous phase. For example, dinitrogen tetraoxide gas decomposes into nitrogen dioxide gas. In a closed system, these gases are both active masses. When applying the law of mass action, active masses in the gas phase are usually expressed in terms of partial pressure instead of molarity. Neither partial pressure nor molarity indicate the total quantity of a substance; however, they do indicate the relative amount of a substance within a liquid or gaseous system. Since the law of mass action describes proportionality of active masses, only the relative quantities are required, making concentration and partial pressure ideal for calculations.

History of the Law of Mass Action

The discovery of the law of mass action began with the understanding that many reactions not only proceed in the forward direction, but proceed in the reverse direction as well. French chemist Claude Louis Berthollet was one of the early chemists to demonstrate chemical equilibrium, the ability of reactions to react forward and backward until there is no net change in the quantity of reactants or products and equilibrium concentrations are reached.

Building on Berthollet's work, Norwegian chemists Cato Maximilian Guldberg and Peter Waage discovered that reactants and products of these equilibrium reactions have stoichiometric coefficients. They realized that these stoichiometric coefficients, combined with the concentrations of the reactants and products, allowed them to predict the reaction rate. This discovery was formalized as the law of mass action and yielded the mass action equation. 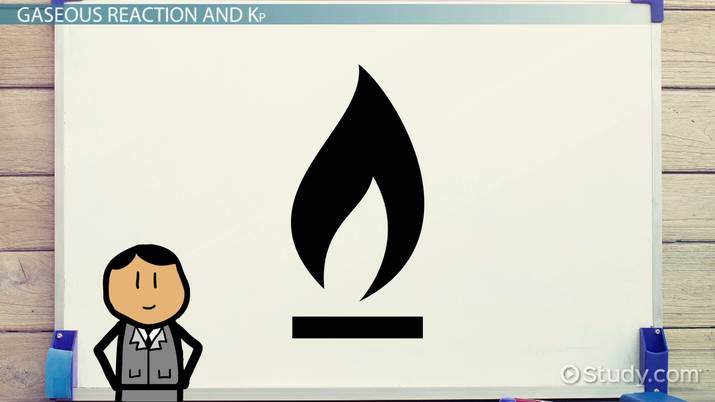 Try it now
Back
Coming up next: Equilibrium Constant (K) and Reaction Quotient (Q)

In this equation, A and B are reactants, C and D are products, and a, b, c, and d are their respective stoichiometric coefficients.

The Equilibrium Constants in Law of Mass Action

The formula for the equilibrium constant (Keq) is expressed as follows:

At equilibrium, the forward and reverse rates are equal:

By dividing each side of the equation by {eq}k_r[A]^a[B]^b {/eq}, the rate constants are isolated to one side. The fraction kf/kr at equilibrium is named Keq. This yields the law of mass action equation:

Relationship of Kc, Kp and Kx

Kc, Kp, and Kx represent the equilibrium constant calculated from active mass concentration, pressure, and molar concentration respectively. In gaseous phase reactions, the law of mass action equation uses partial pressures of each active mass. The law of mass action equation for gaseous phase reactions is shown below. In this equation, Kp is the equilibrium constant for pressure and P indicates partial pressure.

Through mathematical derivation, Kp can be related to Kc. For any ideal gas, {eq}P = nRT {/eq}, where P is pressure, n is moles, R is the ideal gas constant, and T is temperature. Replacing moles with concentration of a gas, we relate partial pressure to concentration in the equation {eq}P_x = C_xRT {/eq}, where x is a single reactant or product in the gaseous phase.

This equation can be plugged into the law of mass action equation for pressure above.

Next, the RT term is factored out along with the exponents. The exponents that are in the numerator are added together and those in the denominator are subtracted to yield the final exponent.

The factored-out exponents (a+b-c-d) represent the difference between moles of products and moles of reactants in the original chemical equation. This is named {eq}\Delta n {/eq}, and is added to yield the final equation relating Kc to Kp:

where Kp is the pressure equilibrium constant, Kx is the name of the fraction in the simplification, and delta n is the mole difference, as before.

Sodium chloride dissolves into ions in solution. The chemical equation for salt dissolving is {eq}NaCl \to Na^+ + Cl^- {/eq}. One mole of NaCl is dissolved in 1 L water at 25 degrees celsius. The equilibrium constant is {eq}29.33 mol^2/L^2 {/eq}. Find the concentration of sodium ions in solution.

Solution: Let x be the moles of NaCl consumed during the reaction. The moles of each species at equilibrium can be expressed in terms of x:

K eq can be expressed using the law of mass action equation, and the expressions in terms of x can be plugged in:

The value of Keq is pugged in and the above equation simplified:

Solving manually or by graphing software for x yields x = 0.97. Since the concentration of sodium ions at equilibrium is equal to x, this yields our final answer:

The concentration of Na+ is 0.97 moles/liter

To use this equation, we need to calculate delta n. Two moles of products is produced from four moles reactants, so delta n is -2. Also, T (temperature) must be converted to units of kelvin (add 273 to degrees celsius). In standard units, the gas constant R is equal to 8.31 L*kPa /(K*mol).

The law of mass action has a wide variety of applications. For example, an aqueous reaction that produces gas might favor the reactants, but when the gas is allowed to leave the reaction system, the reaction becomes favorable. Additionally, the law of mass action allows scientists to know exactly how much of each reactant component is in a reaction system. This could allow scientists to determine if any harmful amount of a toxic reactant is left in solution after a reaction.

The law of mass action states that the rate of a rate of a reaction is proportional to the active masses of the reaction components. Active masses are any substance that are actively reacting. Solids that precipitate out of solution and gases that bubble out into the atmosphere are often reaction components that are not actively reacting. The proportionality in law of mass action is used to create the law of mass action: {eq}K_{eq} = \frac{[A]^a[B]^b}{[C]^c[D]^d} {/eq}, where A and B are reactants, C and D are products, and a-d are stoichiometric coefficients.

Finally, Kp can be written in terms of molar concentrations:

What is meant by Law of Mass Action?

The law of mass action states that the rate of a reaction is proportional to its active masses. Chemical species in a reaction are considered 'active' if they are able actively participate in the reaction.

Why is the Law of Mass Action important?

The law of mass action is important because it allows chemists to determine an equilibrium constant for reversible reactions. This constant allows the prediction of the quantities of each active mass at chemical equilibrium.