How is the human body organized? The levels of structural organization in the human body start with atoms, as all matter on Earth is made of these. There are several elements in particular that makeup living things:

These types of atoms make up most of the molecules in our body. Those molecules form the basic units of life, cells. Cells come together in different levels of organization in the human body to form an entire organism or living thing. 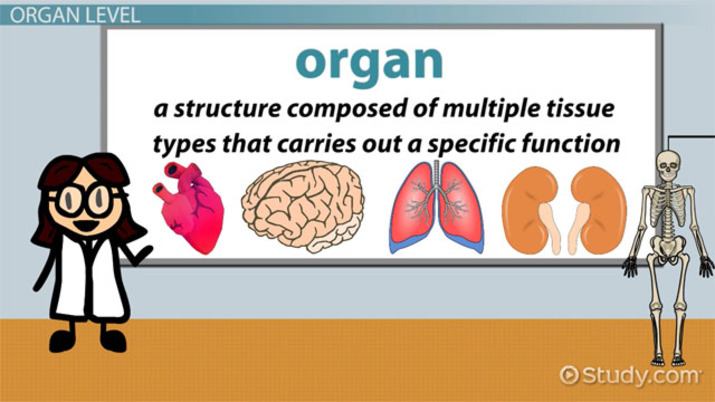 Levels of Organization in the Human Body

The highest level of organization in the body is the organism level. This is the entirety of a living thing, such as the entire human body.

An organ system is a collection of organs in the body that works together to perform a function. There are eleven examples of organ systems in the human body including:

An organ is a biological unit made up of tissue and independently performs a specific function for the body. Some examples of organs in the body include:

Epithelial tissue forms the covering of the body and organs. Its main function is to offer protection and separation from the environment. Connective tissue binds, connects, and cushions the body. Muscle tissue is for contraction and movement. Nervous tissue is for communication. The table below details the different functions of the four tissues in the body and examples.

Cells are the basic structural units of living matter. Most cells in the human body contain one or more nuclei, which hold the genetic instructions for the cell's structure and function. There are several main functions of cells in the body including absorbing nutrients and converting food into energy through the process of cellular respiration. There are over 200 cell types in the human body. Some examples of cells at the cellular level of organization include:

Cells are considered the basic units of life because they are self-sustaining. All cells are capable of making more of themselves through cell division. The information needed for cellular structure and function is coded for in the DNA. In eukaryotic cells, like human cells, DNA is enclosed in an organelle called the nucleus. Cells also have other organelles as well, such as ribosomes for making protein, mitochondria for making energy, the Golgi apparatus for sorting proteins and more. Different cells have different compositions of organelles depending on their job inside the body. For example, cardiomyocytes or heart cells, have lot of mitochondria because they need to make energy to contract and keep the heart beating. Hepatocytes, or liver cells, have lots of smooth endoplasmic reticulum to help the liver detoxify the body.

These molecules are made of different types of atoms. grouped together by chemical reactions. For example, hydrogen and water can be combined to make water.

The levels of organization from the most complex to least complex in the human body are summarized in the table below:

Cells are the basic units of life and make up all living things. The human body has many types of cells that are arranged into four distinct tissues. These tissues form organs, which perform a specific job in the body. Organs work together in organ systems, which form an organism.

What are the six levels of organization in the body from simplest to most complex?

The six levels of organization in the body from simplest to most complex are:

What are the 12 levels of biological organization?

The twelve levels of biological organization are:

Converting Fractions to Percents & Back

Ordered Pairs on the Coordinate Plane

What is the Function of the Integumentary System?

What are the Human Body Systems?