Copyright
Eliza Smith, Racquel Fulton
Explore the similarities and differences between a lien theory state and a title theory state. Learn what they are, when they are used, and which states use them. Updated: 06/15/2022

Assume there are two people, Job and Leroy, who have identical lives and have decided to buy identical houses. However, Job and Leroy live in two different states. Job lives in Nevada, while Leroy lives in New York. The two houses thy choose to purchase are very similar, and as soon as the purchasing procedures are done, the two will receive the titles simultaneously. However, the similarities end with the reception of home titles.

The difference begins with their legal rights as homeowners since, in the United States, each state determines whether it is a title theory state, a lien theory state, or a combination of the two. The two theories dictate the nature of homeownership in either of the two ways. The first is based on taking out a mortgage which acts as a pledge of property as collateral for the loan. Therefore, the mortgage acts as a line of the property's title. At the same time, the second term is based on the lender holding the property's title in the form of trust until the loan is fully paid. Notably, the intermediary theory takes from either of the two theories. Therefore, each state is expected to adopt one of the three real estate and home ownership systems. 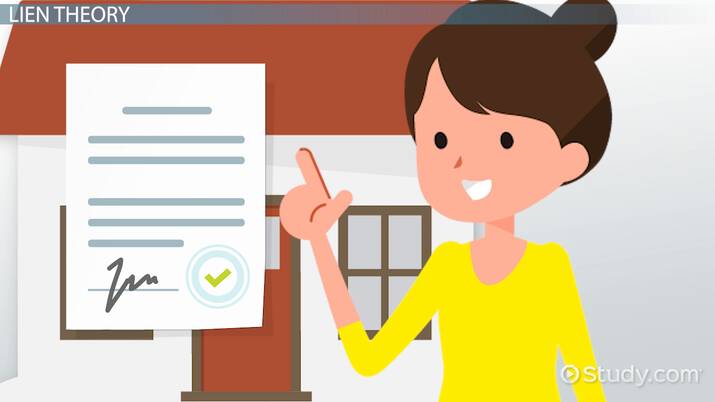 Try it now
Back
Coming up next: Annexation in Real Estate: Definition, Methods & Laws

Leroy's house is in New York, a lien theory state. Therefore, upon the purchase, he can claim ownership of the house. To facilitate this, Leroy signed a mortgage. The mortgage is an agreement that was made between Leroy (the mortgagor) and the bank or the creditor (mortgagee) to get the loan to purchase the house. The mortgagor provides this mortgage to the mortgagee as a security interest in the title. This transaction establishes security for the lender's rights and gives the borrower a right to keep the title of the house until the debt is fully paid.

Another key development with lien theory occurs if the borrower defaults on the loan. Since the mortgagor holds the complete title to the home, the lender cannot just go to the borrower and demand back the ownership title of the house. According to lien theory, the lender must petition the court to be granted permission to use the lien against the property for foreclosure. This is referred to as judicial foreclosure. Therefore, without the court's consent, the mortgagee is powerless to take back the home if the mortgagor defaults. This process is usually time-consuming. Thus, the mortgagee will find it more expensive than the title theory procedure. At the same time, it can be advantageous for the borrower as it gives him more time to sort out the financial difficulties he could be running into. If the mortgage was fully paid, the lien is removed by having the two parties sign release or mortgage satisfaction filed in the public record.

There are cases of a non-judicial foreclosure in lien theory states like California. This happens when the state recognizes the deed of trust. Here the home buyer also referred to as the trustor, would be required to sign a deed of trust, making the lender the beneficiary. A third party referred to as the trustee receives the legal title of the property. The trustee has the power to foreclosure the buyer in case of a default. The terms of repossession here are subject to the conditions of the deed of trust. However, if the buyer manages to pay off the loan, a deed of reconveyance will be recorded. That way, the lender's interest in the property would be removed.

Based on the earlier examples of the two buyers, Leroy lives in New York, a lien theory state. Therefore, he expects to gain the property title after the purchase. This also implies that the lenders would begin foreclosure immediately after default.

On the other hand, Job lives in Nevada, a title theory state. In this case, Job would be required to place his title into a trust to secure the loan. Rather than signing a mortgage, Job would be required to sign a deed of trust. The deed of trust is the agreement between the borrower (trustor) and the lender (beneficiary) to get the loan for purchasing the house. In addition to this, a third party known as the trustee will be used to oversee the trust until the trustor fully pays for the loan. In this case, if Job defaults on the loan, he has limited rights on the title. The trustee would not need court consent to conduct the foreclosure. Under the clause of 'power of sale,' the trustee has been awarded the right to bypass the court of law during foreclosure.

When foreclosure is conducted without involving the court of law, it is known as non-judicial foreclosure. Every state has a statute on the procedure for foreclosure. They typically include sending a default letter to the borrower and filing a notice of default. Shall the borrower not cater for the default within the period specified by the state, the borrower will be sent a notice of trustee sale. At the same time, it will be posted in public places, published in regional legal publications, and recorded in public records. This then allows the property to be auctioned to the highest bidder.

However, if the borrower manages to pay back the loan in full, a deed of reconveyance is issued and recorded in public records. This also clears the title of the property.

Title theory works in states where banks and mortgage lenders keep the property's title until the borrower makes full payment. There are about 20 U.S. states that are recognized as title theory.

Unlike Leroy, Job, who happens to be in one of the title theory states, would only claim the title for the property upon full payment of the loan. This also means he is limited in case of a default as the lender can bypass the court of law when conducting the foreclosure.

Lien theory and the title theory dictate the terms of property title ownership and foreclosure procedures in each of the states in the U.S. In lien theory states, the borrower attains the property's title as soon as the purchase is made. In place of this, the borrower and the lender sign a mortgage which acts as a security interest for the loan. Upon full payment of the loan, the lender issues a satisfaction, which is also recorded in the public records. However, if the lender defaults on loan, the lender must seek legal permission to conduct a foreclosure.

In title theory states, the borrower places the property's title into trust as a security for the loan. This means the lenders retain ownership of the title until the loan is fully paid. Instead of a mortgage, the borrower signs a deed of trust, which places the lender as a beneficiary. There is a third party known as the trustee, whose work is to oversee the trust until the borrower fully pays for the loan. If the borrower makes the full payment, they will be issued a deed of reconveyance and cleared for the property's title. However, if there is a default, the trustee has the right to bypass a court of law for foreclosure. In this case, the trustee can repossess the property and auction it to the highest bidder because, under the clause of 'power of sale' in a deed of trust, the trustee has been awarded the right to bypass the court of law during foreclosure.

What is the difference between lien theory and title theory?

Who holds title in a lien theory state?

The borrower, also known as the mortgagor, holds the property title upon purchase in a lien theory state. In place of this, the borrower signs a mortgage, which acts as a security interest for the title until the loan is fully repaid.

What are title states?

Title theory states are those in which the banks and mortgage lenders keep the property's title. When the buyer has fully paid for the loan, they will be issued a deed of reconveyance.

Easement Appurtenant Features & Examples | What is an Easement in Real Estate?

Condominium Ownership Overview | What is a Condominium?

Easement Appurtenant Features & Examples | What is an Easement in Real Estate?

Condominium Ownership Overview | What is a Condominium?