Copyright
Rochelle Enrera, David Wood
Learn what type of wave describes "light." Understand the parts of a light wave, discover the different types of light waves, and view examples related to them. Updated: 10/06/2021

In this lesson, learn more about light waves, their types, parts, and various applications.

What Are Light Waves?

Light waves, like other types of waves, carry energy from a source. They are composed of discrete particles of energy called photons. Photons are massless, but they carry momentum and energy.

Just like how there are sounds that cannot be heard because they are beyond the human hearing range, there are also forms of light waves that cannot be seen by human eyes. However, properties such as wavelength and frequency are common in all types of waves. Wavelength is the distance between adjacent parts of a wave (e.g., crest to crest or trough to trough). Frequency, on the other hand, refers to the number of waves that pass through a fixed point at a given time. The higher the frequency, the more waves pass through each point and vice versa. Frequency is directly related to energy, where the higher the frequency of the wave, the higher its energy. 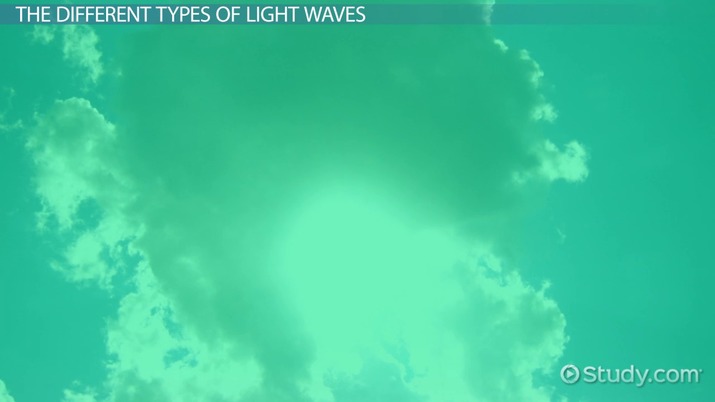 Try it now
Back
Coming up next: Light Year: Definition & Overview

What Type of Wave is Light?

Light is a transverse wave, where the movement of the particle is perpendicular to the propagation of the wave. It is formed by alternating electric and magnetic fields produced by accelerating charged particles. These alternating electric and magnetic fields propagate perpendicular to the direction of propagation of a wave. Another characteristic of light is that it can propagate even in the absence of a medium. This is why sunlight can easily reach Earth even if there is only an empty space between the planet and the sun. All forms of light waves are electromagnetic waves; thus, they all travel at the same speed of {eq}3.00\times 10^8 {/eq} m/s.

The electromagnetic spectrum includes all the different forms of light waves which vary only in terms of their frequencies and wavelengths. Note that each type has no distinct division and may overlap from time to time. The following are the different forms of light waves (kinds of electromagnetic waves) arranged in increasing frequency and decreasing wavelengths:

Sunlight is a source of visible light. It enables humans to perceive things around them. Light bulbs, fireflies, and stars all emit visible light. However, harmful ultraviolet radiation also comes from the sun and may result in skin damage after long exposures. Ultraviolet rays are also used to detect counterfeit money, where special ink invisible under normal lighting conditions is detected by exposing bills to ultraviolet light. This application has been easily integrated into identification cards and credit cards for additional security.

Remote controls use infrared waves to control televisions at home. It transmits pulses of infrared light that are then transmitted as signals or codes and reach the television as commands. Infrared thermometers also use infrared radiation. It uses a lens to focus infrared radiation being emitted by the object onto a detector. The radiation is then absorbed and converted into heat, which produces a voltage output. This is used to determine the temperature and is eventually displayed on the screen.

Aside from the common examples discussed above, different forms of light waves have a wide range of applications. A few of these are the following:

Light waves carry energy from a source. It is composed of massless and discrete packets of energy called photons. Any form of a wave has common properties, namely, frequency and wavelength. Light is a transverse wave, characterized by alternating electric and magnetic fields propagating perpendicular to the direction of the wave. All light waves also travel at the same speed of {eq}3.00\times 10^8 {/eq} m/s in vacuum. Unlike other types of waves, light waves do not need any medium to propagate.

The electromagnetic spectrum includes the different forms of light waves arranged in terms of varying wavelength and frequency. These are radio waves, microwaves, infrared, visible light, ultraviolet, X-rays, and gamma rays. Radio waves have the longest wavelength and lowest frequency, while gamma rays have the shortest wavelength and the highest frequency. Each form has a specific application in the society. In general, electromagnetic waves are used in cell phones, radio broadcasting, Wi-Fi, cooking, vision, medical imaging, and cancer treatment.

What is an example of a light wave?

What are light waves?

Light waves transfer energy from a source. It is composed of discrete packets of massless photons. Light waves are transverse waves and can propagate even without a medium.

What are 3 characteristics of light waves?

Light waves have a wavelength, frequency, and speed. Wavelength is the distance between two identical parts of a wave, such as from crest to crest or trough to trough. Frequency is the number of waves that pass through a fixed point at a given time. Speed is the distance traveled by the wave per unit time. All forms of light waves have the same speed in vacuum (3.00 * 10^8 m/s).

Is light a transverse wave?

Light waves are transverse waves. It is produced by alternating electric and magnetic fields perpendicular to the propagation of the wave.

The Study of Light | What is Light?

Waves: Types & Overview | What are Waves?

Magnetism Overview & Poles | What is Magnetism?

What is a Mechanical Wave?