Lipogenesis is the synthesis of acetyl-coenzyme A (acetyl-CoA) subunits into triglycerides. Lipogenesis consists of fatty acid synthesis followed by triglyceride synthesis. The triglycerides formed in lipogenesis are stored in the adipocytes of adipose tissue. Acetyl-CoA is the building block of fatty acids, and consists of an acetyl group bonded to the nucleotide coenzyme A. It is generated and used in different metabolic pathways, including the citric acid cycle and amino acid synthesis. Fatty acids consist of a carboxylic head group bonded to a long hydrocarbon chain. Triglycerides consist of three fatty acid residues esterified to glycerol, a three-carbon alcohol.

Where Does Lipogenesis Occur? 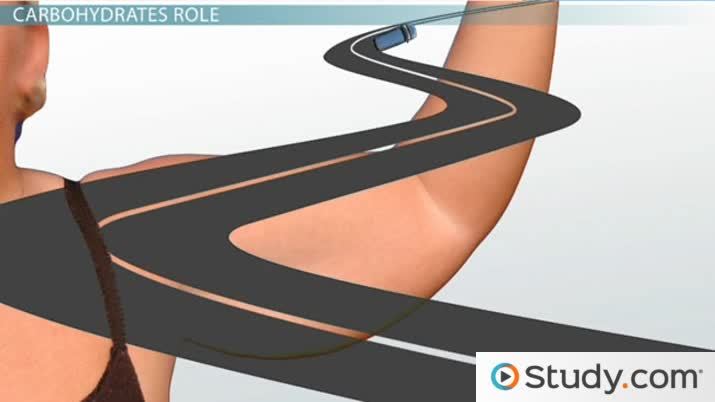 Try it now
Back
Coming up next: Alcohol Metabolism: Process & Effects

Role of Carbohydrates in Lipogenesis

Cells can convert molecules from other metabolic pathways into triglycerides. First, the starting molecule is degraded to one of the starting materials for lipogenesis, and then lipogenesis forms triglycerides. Excess carbohydrates in the body are commonly converted into triglycerides. Polysaccharides used for lipolysis are first broken down into monosaccharides. Polysaccharides either come directly from food or are stored as glycogen in the liver and muscle tissue. Glycogenolysis is responsible for degrading glycogen to glucose (in the liver) or glucose-6-phosphate (in muscle). Polysaccharides from the diet are broken down into monosaccharides including glucose, fructose, and galactose. These monosaccharides enter glycolysis at different steps, where they are degraded to different intermediates and ultimately pyruvate. Pyruvate can then be decarboxylated to form acetyl-CoA, one of the starting materials for fatty acid synthesis. Glycolysis intermediates dihydroxyacetone phosphate and pyruvate can also be converted to glycerol-3-phosphate, one of the starting materials for triglyceride synthesis.

The purpose of lipogenesis is to synthesize triglycerides that will be stored as energy in adipose tissue. These triglycerides can later be broken down via beta-oxidation to generate adenosine triphosphate (ATP). Triglycerides are the preferred energy storage molecule because the highly reduced fatty acid tails have high energy potential when oxidized. In fact, fatty acids produce over twice as much energy per gram as polysaccharides during oxidation. Triglycerides can be synthesized via lipogenesis from various starting materials, including carbohydrates, amino acids, and other lipids. These molecules are degraded through different metabolic pathways to produce the starting materials for lipogenesis, including acetyl-CoA and glycerol-3-phosphate.

Lipogenesis occurs mainly in the cytoplasm and endoplasmic reticulum of liver cells and adipose cells. The degradation of carbohydrates provides the starting materials acetyl-CoA and glycerol-3-phosphate for lipogenesis to occur. The triglycerides produced by lipogenesis are stored in adipose tissue to be used as an energy reserve. Lipogenesis is regulated by different metabolic pathway intermediates and hormones. Insulin increases the rate of lipogenesis, while growth hormone and leptin decrease lipogenesis.

What is the difference between lipogenesis and lipolysis?

What is the purpose of lipogenesis?

The purpose of lipogenesis is to produce triglycerides from acetyl-CoA subunits. These triglycerides are then used as an energy reserve stored in adipose tissue.

What are the steps of lipogenesis?