"Little Red Riding Hood" by Charles Perrault tells of a young girl who comes across a cunning wolf on the way to her grandmother's home. The wolf deceives both her and her grandmother and eats them, a grim ending for the protagonist of the story. This version, by Charles Perrault, was first published in France in 1697. Many spoken versions of the tale existed, but Perrault is thought to be the first to write and publish the story. Because the moral of the story warns pretty young girls against the trickery of wolves, its intended audience is assumed to be the young girls of the French court. 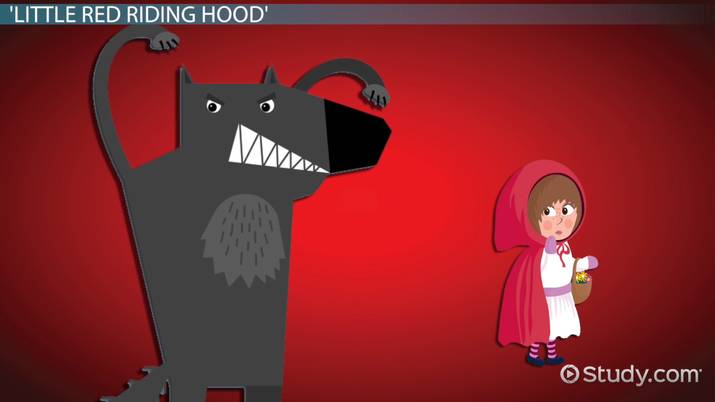 Try it now
Back
Coming up next: Charles Perrault's Puss in Boots: Summary, Analysis & Morals

"Little Red Riding Hood" is the story of a beautiful, young girl whose mother sends her, with a basket of goods, to her ill grandmother the next village over. This journey requires that the young girl enter the woods.

Upon entering the woods, the girl comes across a hungry wolf who has half a mind to eat her, right then and there, but refrains because of some wood-cutters nearby. Instead, he asks her where she is going, and she says that she is going to her grandmother's house. He asks if it is far and she responds that it is the first house in the next village over.

The wolf tells her that he will go to her grandmother's house too. He tells her to take one path while he takes another and they will see who gets there first.

The wolf, having made sure he arrives first by choosing the shorter path, races to the grandmother's house while Little Red Riding Hood takes her time, collecting nuts and chasing butterflies on her way.

When he arrives, he disguises his voice to sound like the little girl and the grandmother allows him into her home. Upon entering, he eats her. He then dresses in her clothing and climbs into bed to wait for the little girl.

When the girl arrives and calls to her grandmother, the wolf responds, telling the girl to enter. He tells her to set the cake and butter aside and climb into bed with him. The girl undresses, climbs into bed, and begins to comment on the wolf's arms, legs, ears, eyes, and finally teeth, to which the wolf replies, "all the better to eat you with," and gobbles up the girl.

Upon first glance, Charles Perrault's "Little Red Riding Hood" appears to be a story warning children of the dangers of speaking to strangers, but as the reader examines the text further, it becomes a coming of age story as well.

The meaning, or moral, behind "Little Red Riding Hood" can vary based on the interpretation that is read. In some versions, the mother gives the young girl specific instructions to keep to the trail and not wander. The mother's instructions emphasize a moral of the importance of listening and following instructions. However, this is not the case in Perrault's tale. Instead, Perrault's version urges beautiful, young girls not to talk to strangers, because a wolf is not always "noisy, hateful, or angry" and easy to spot; it is the "tame, obliging, and gentle" wolves that are the most dangerous.

Perrault's version of "Little Red Riding Hood" ends more menacingly than many of the other adaptations. In this rendition, the wolf deceives both the old woman and the little girl, devouring each of them by the end of the story. No hunter comes to save them and they perish in the belly of the wolf. Perrault then goes on to write a poetic moral for the story, warning beautiful, young girls of the wolves that intend to prey on them, warning them that "tame, obliging, and gentle" wolves are the most dangerous of all.

In the 17th century, when "Little Red Riding Hood" was written, an of-age girl's hair was the most powerful attribute when it came to attracting a male. The hood covering the girl's hair is meant to send the message that she is not available, making the wolf's advances all the more unsettling.

The color red in "Little Red Riding Hood" is symbolic for a couple of reasons. First, the color red represents sexual impurity and sin. No decent woman in the 17th century would be seen wearing a red dress. The color red was reserved for women with bad reputations. Perrault is said to be the first to introduce the red hood into the story, and having been written in the 17th century, his implication is apparent. It should also be mentioned that the color red frequently symbolizes the coming age or puberty as it is the color of life and blood. The grandmother passing the cloak onto the young girl represents the passing of womanhood.

The forest in "Little Red Riding Hood" is included in the tale for a number of meaningful purposes. First, the woods represent unknown danger and coming of age. Frequently in folklore, a character must enter the woods and upon making it out, they have experienced a sort of transformative growth. The forest has also been said to symbolize sexuality, as it is an extremely fertile, yet wild and unpredictable environment. In Perrault's story, the girl makes it through the forest only to be taken advantage of by the wolf. In the Brothers Grimm version, a hunter comes along and cuts the child and grandmother from the stomach of the wolf, representing a sort of rebirth.

The Basket and the Bottle

While Charles Perrault's version of the story has the young girl carrying cakes and butter to her grandmother, the Grimm Brothers gave her a bottle of wine and cakes. The basket and bottle of wine are important to consider. It is said that the basket could be representative of virginity while the bottle itself could also carry several meanings. The phallic shape of the bottle within the basket is the most obvious. It is also fragile and must be broken or opened to access what is within, which, if the wine were red, would symbolize passion.

Charles Perrault's vs. Other Versions of "Little Red Riding Hood"

As is common among fairy tales, there are many versions of "Little Red Riding Hood" spanning many cultures. In 1697, Charles Perrault's was the first to be published and it differs from the other versions in some ways. For example, while both the grandmother and Little Red Riding Hood perish at the end of Perrault's tale, in many of the stories the cunning wolf meets his demise. There are numerous minute differences across the many versions, but the most notable in Perrault's are the strong sexual overtones, including the red hood, which is said to have been first used by him. While on the surface, "Little Red Riding Hood" reads as an innocent children's story, Perrault uses a poetic moral at the end of his tale to warn beautiful, "well bred," young women of the dangers of talking to unknown men.

When and where did Charles Perrault write "Little Red Riding Hood?"

Charles Perrault's "Little Red Riding Hood" was published in France in 1697. His publication was a written version of several oral tales that he had collected.

How does the Perrault version of "Little Red Riding Hood" end?

At the end of Perrault's "Little Red Riding Hood" the wolf gobbles up both the grandmother and the girl and they meet their end. This ending differs slightly from various other versions where a hunter stumbles upon the cottage and cuts the little girl and her grandmother from the wolf's stomach.

How is Charles Perrault's "Little Red Riding Hood" different from other versions?

Perrault's "Little Red Riding Hood" differs slightly from the other various versions. For example, in a version by the Brothers Grimm, both Little Red Cap and her grandmother are saved by a hunter. In another version originating in Italy/Austria, it is an ogre that Little Red Hat meets, instead of a wolf.

What is the moral lesson of "Little Red Riding Hood?"

The moral of "Little Red Riding Hood" is that children, especially young girls, must be cautious of strangers. While they may appear to be "tame, obliging, and gentle," they will eventually show their teeth and eat up innocent young girls. This animal reference hints strongly towards a sexual warning.

What are the main events in "Little Red Riding Hood?"

Listening for Facts and Opinions

The Adventures of Pinocchio by Carlo Collodi | Summary & Analysis

The Ballad of Reading Gaol by Oscar Wilde | Summary & Analysis