What is Logistic Growth?

The Y-axis shows the total population increase or decreases going up and down on the graph.

The X-axis shows the advancement of time moving to the right of the graph. 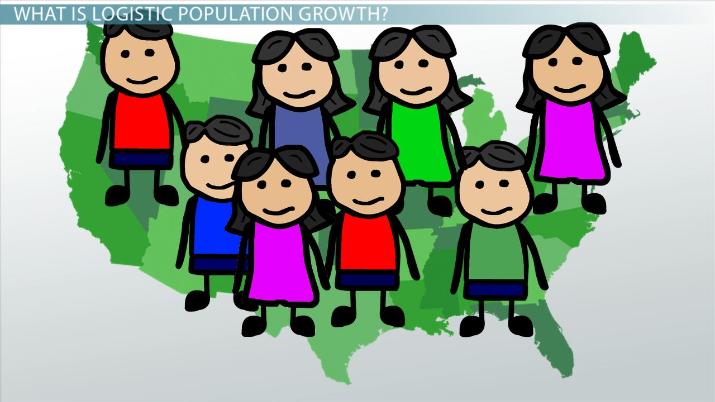 Coming up next: Neolithic Agricultural Revolution: Causes and Implications

Economists, mathematicians, government officials, and others would more than likely choose the logistic growth model over other population models because of the accuracy the model displays. Logistic population growth can only expand so much before the population experiences the limit of resources that can help sustain the growing population.

The logistic growth equation is dN/dt=rN((K-N)/K).

A different equation can be used when an event occurs that negatively affects the population.

Each component of this equation is:

A city of 100,000 people was infected with the coronavirus. The logistic growth rate (b) for the city is 0.8090. The city council knows that at least one person is infected and has read reports from other cities that the virus spreads quickly. The city council is interested in the number of people that will be infected after 15 days (x). The limiting factor of the city, c, is 100,000 since everyone in the city can get infected. The city council also knows that there has to be at least one case at the beginning which means the rest of the population will be represented by (a) = 99,999.

In this example, the equation will show issues when certain components carry different numerical values and how they can affect the logistic population growth.

The equation f(x) = c/(1+ae^{-bx}) can be used if there is an event that occurs that causes the population to decrease, such as a virus infecting a city.

Make a set of flashcards that list all of the keywords (those in bold) from the lesson and their definitions. The keywords should be on one side and the definition should be on the other. That way, with a partner or in small groups, you can quiz each other to make sure you understand the key terms from the lesson. Tip: It may help to also illustrate the definition on the flashcard in addition to writing it out.

Create a poster or other type of graphic organizer or visual aid that depicts population growth rate and the factors that contribute to a positive growth rate.

Example: Illustrating factors that sustain a population, such as food, space, water, and economic opportunities will help you show the elements of a positive growth rate.

Example: You could state in your essay that you are good at math, so equations naturally make sense to you, and they give you the opportunity to plug in more numbers that more precisely reflect logistic population growth. Or, you could explain that you are a visual learner so the graph is more appealing and gives you an overall idea of logistic population growth without making you feel bogged down in the numbers.

What is an example of a population that shows logistic growth?

A population of 10 people living on an island will grow slowly and then rapidly grow as the population expands and more people give birth. Eventually, assuming resources are limited, and no major event is introduced, the population will slow or decrease because the island will have limited resources.

What is the logistic population growth model?

The logistic population growth model shows the gradual increase in population at the beginning, followed by a period of rapid growth. Eventually, the model will display a decrease in the growth rate as the population meets or exceeds the carrying capacity.

What is the difference between exponential and logistic population growth?

How to Find Per Capita Growth Rate of Populations