The Odyssey and Greek Mythology

The Odyssey was probably composed around the 8th century BCE. It is attributed to the poet Homer, but details of its composition are not entirely clear. The Odyssey is set directly after the events of Homer's Iliad and it follows the character of Odysseus as he strives to return home from Troy. His journey is perilous and full of misadventures. Many important figures from Greek mythology appear in the Odyssey, including Cyclopes, Sirens, Scylla and Charybdis, and the Lotus Eaters. 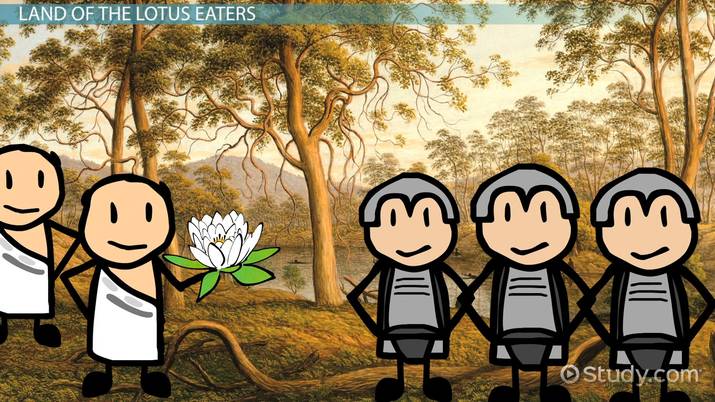 Coming up next: Laestrygonians in The Odyssey

While the Lotus Eaters have become quite famous in the years since the Odyssey was first written, they actually appear for only a very small portion of the story: around one page. In Book IX of the Odyssey, Odysseus begins telling the story of his experiences over the past ten years. He explains how he and his men visited a number of different islands on their quest to find a way home. One of those islands was the home of the Lotus Eaters. Odysseus' Lotus Eaters summary is brief and to the point.

Who Are the Lotus Eaters?

Odysseus and his men alight on an island and have a meal there. He sends three men out to explore and orders them to report back with more information. They soon meet a group of people who appear human. These people are friendly and cause them no harm. They offer lotus plants to Odysseus' men, who gratefully eat them. Upon eating the plants, the men find that they are so delicious that they lose all interest in returning home and want only to remain with the Lotus Eaters forever. Odysseus goes out and finds his men, forcing them back onto their boats. He swiftly leaves the island before his entire journey can be brought to a halt. This is one of the ways that Odysseus shows that he is a good leader.

Where Is the Land of the Lotus Eaters?

What Is the Lotus Plant?

The Lotus Eaters are implied to subsist primarily or even entirely on lotus plants. These plants have a narcotic effect that makes the Lotus Eaters happy and complacent. There has been much debate over the years surrounding what plant the Lotus Eaters were actually consuming. A compelling argument can be made that the word ''lotos'' in Greek was actually referring to opium poppies. Whether or not the lotus plants referred to in the Odyssey were meant to be a real-life plant, they certainly have similar effects to a number of drugs. Within the story, the lotus plants symbolize addiction: the lotus plant represents too much of a good thing.

Significance of the Lotus-Eaters

''The Lotos-eaters'' is a poem by Alfred, Lord Tennyson, an English poet. The poem is a retelling of the story of the Lotus Eaters from the Odyssey. The first part of the poem describes the experience of Odysseus' men arriving on the island and consuming the lotus plant. Tennyson says that while they all feel love for their missing spouses and children and a longing for home, the journey home seems so odious that none of them is willing to undertake it. The second part of the poem is essentially a long song in praise of the lotus, ending with the decisive rejection by the sailors of any journey home: ''O, rest ye, brother mariners, we will not wander more.''

The lotus plant may have been based on several real plants, some of which have narcotic effects. The plants represent addiction, or too much of a good thing for Odysseus and his men. Despite the fact that the Lotus Eaters appear only in a very small part of the Odyssey, stories about the Lotus Eaters have continued to appear throughout the years, including in the famous poem ''The Lotos-eaters'' by Alfred, Lord Tennyson.

Laestrygonians in The Odyssey

Cyclops in The Odyssey & Greek Mythology | Who is Polyphemus?

The Sirens in the Odyssey | Features & Song

Thrinacia in The Odyssey

Hades' Underworld in The Odyssey by Homer | Role & Analysis

Phaeacians in The Odyssey by Homer | Significance & Role

Ogygia in "The Odyssey" by Homer | Significance & Analysis

Poseidon in the Odyssey Traits & Myth | Who is the Son of Poseidon?

Who Is Eurycleia in The Odyssey?