Copyright
Kelly Barkers, Artem Cheprasov
Learn about the luminosity of a star. Discover the difference between apparent brightness and luminosity and understand the luminosity formula, with examples. Updated: 12/26/2021

Professional astronomers, amateurs or anyone who has looked up in the nighttime sky has probably noticed the star Sirius. Located in the constellation Canis Major, Sirius is the brightest star visible on Earth, aside from the Sun. However, this does not mean that Sirius generates the most energy nor is the largest or hottest star. Compared to Earth's Sun, Sirius is only 1.7 times larger in radius. On the other hand, Rigel, a star in the Orion constellation, is nearly 80 times larger in radius than Earth's Sun but is only the 7th brightest star in the nighttime sky. How is one star so much smaller but able to shine so much brighter? The answer lies in perception.

The brightness of an object is the quality of the light that appears to shine from it and is influenced by the observer's distance to the object, For example, Sirius is only located 8.6 light years away from Earth while Rigel is quite a bit father at 863 light years away. Therefore, Rigel appears to be more dim because of the greater distance between the star and Earth. In order to accurately measure the amount of light from a star, scientists developed an equation that measures luminosity. Luminosity is the intrinsic or actual amount of light given off by an object. Specifically, luminosity in the total amount of electromagnetic energy released by a star per unit of time. Rigel's luminosity is 120,000 times brighter than the Sun while Sirius' luminosity is only about 25 times brighter than the Sun. Since Sirius is so much closer to Earth than Rigel, it appears much brighter even though it is smaller, cooler and produces less energy. 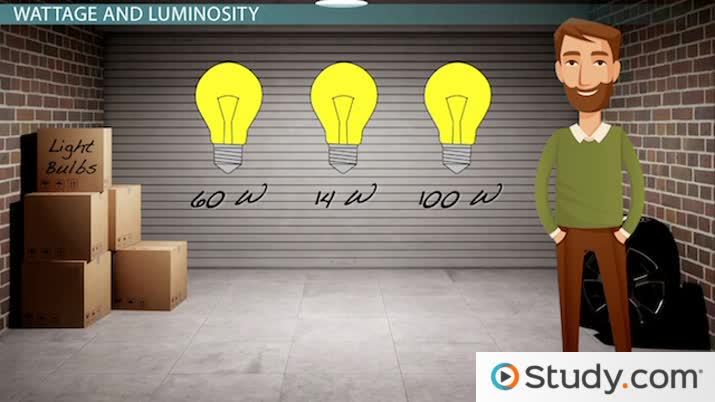 Coming up next: Using the Magnitude Scale to Compare Star Brightness

Luminosity of a Star

To calculate the luminosity of a star using brightness, astronomers use the formula:

Notice that in order to calculate luminosity with this method, brightness must be known. Even though the brightness of an object is based on perception of the object's distance, it still is a measurement that can be calculated. For example, light bulbs are measured in watts (W). A 40 watt (40W) light bulb generates 40 joules of energy every second. A 120W light bulb would generate 120 joules of energy every second.

The same equation for luminosity can be manipulated to calculate brightness (b). For example:

How is Luminosity Measured?

Another way scientists can measure the luminosity of a star is by using a ratio of the sun's luminosity.

The following explains each ratio in the above equation:

Throughout the galaxy, billions of celestial bodies like stars can be observed. Suns or stars of other solar systems can use nuclear fusion to generate energy. The core of the Earth's Sun is under such intense pressure that a nuclear reaction occurs. The nuclei of hydrogen atoms combine to form helium. When this nuclear reaction occurs, energy and heat is released from the core and up to the surface. This release of energy can be measured in forms of brightness or also in luminosity. Brightness has units of watts, which is the amount of joules of energy released per second. The brightness of an object decreases inversely proportional to the square of the distance the object is away from the observer. This type of relationship is known as an inverse square law. For example, if a star were to move two times further away from Earth, its brightness would decrease by 4 times.

What is the true brightness or luminosity of a star?

Some stars appear brighter than others just because they are closer to Earth rather than have greater energy. True brightness, or luminosity, is the actual amount of energy a star outputs, regardless of the distance it is observed from.

What star has the highest luminosity?

There are over a hundred billion stars in the Milky Way and billions of galaxies in the universe. However, so far the star with the highest observed luminosity is R136a1.

Is luminosity the same as brightness?

How is luminosity calculated?

Create an account
Luminosity of a Star: Measurement & Formula | What is Luminosity?
Start today. Try it now
Basics of Astronomy

Luminosity of a Star: Measurement & Formula | What is Luminosity?
Related Study Materials

Interstellar Medium Characteristics & Existence | What is the ISM?

The Spectral Sequence and Temperature

How to Find the Size of a Star

The Doppler Effect and Star Spectra

Determining the Temperature of a Star