If an observer peers at the moon, they may be lucky enough to catch a glimpse of something special. There are exclusive events that occur when the Earth, moon, and sun align in a straight line (Figure 1). These phenomena are collectively known as called eclipses. Eclipses are when an observer can see the light of one celestial object become obscured from another celestial object passing by. Obscuring is the concealing or darkening of an object.

When the moon darkens during a lunar eclipse, there are two parts to Earth's shadow that are involved. They are known as the umbra and penumbra. The umbra shadow is from the complete blockage of light creating a total darkest shadow on the moon. This often results in the moon having an orange or copper red appearance to it. The penumbra shadow is from partial blockage of light which creates a partial shadow on the moon. Both types of shadows are important as they are involved with the seven stages of lunar eclipses as the moon moves into and out of them (Figure 2).

The first stage occurs when the moon crosses into Earth's penumbra. Second, after crossing into the penumbra, the moon crosses into the umbra which begins a partial lunar eclipse. In stage three, the moon becomes completely wrapped up in the umbra shadow which starts the total eclipse. The moon continues to move through the umbra until it reaches the middle of the eclipse in stage four. This is when the center of the moon and the center of Earth are lineups meaning the moon is fully obscured. Totality occurs in this stage where the moon is fully inside Earth's shadow. It can last for almost two hours. 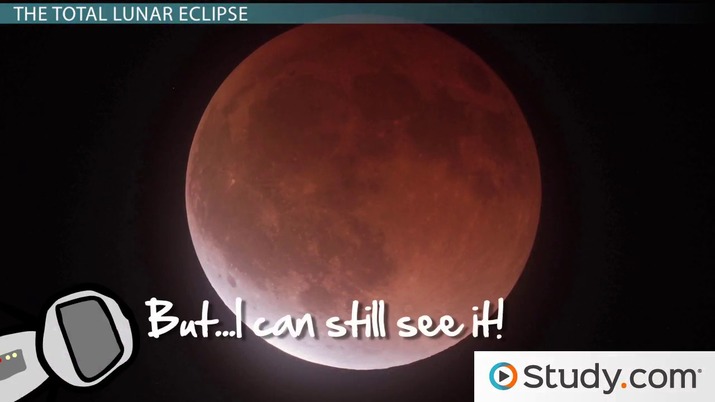 Coming up next: What Is a Solar Eclipse?

Penumbral lunar eclipses occur when the moon travels only through the penumbral shadow. This casts only a partial shadow on a portion of the moon, giving only a slightly faded appearance. Penumbral lunar eclipses are difficult to see as they occur ever so slightly. This is different from umbras which are shadows created by total blockage of light.

During total lunar eclipses, the moon is sometimes called a blood moon from the coppery red appearance to it. It can also appear to be a hue of browns and other warm colors from the sun's rays not refracting on the moon (Figure 4).

Lunar eclipses have been documented in history by many civilizations, including the Incas, Mesopotamians, and Chinese. The Incas were an ancient civilization in South America that worshipped Inti, the sun god. The Incas believed that lunar eclipses were irregular events caused by a jaguar attacking the moon and that the jaguar would eventually attack them. They believed that solar eclipses were caused by the disapproval and anger of Inti. The Incas fasted and practiced human sacrifices after a solar eclipse in an effort to appease the sun god.

The Mesopotamians also believed that lunar eclipses were caused by the moon being under attack. However, they believed that seven demons were after the moon, which they also viewed as an attack on their king. During the eclipses, a substitute king was crowned to face the demon. The substitute king was thought to become a sacrifice, as he then disappeared. After the lunar eclipse ended, the original king was said to return to power.

The ancient Chinese believed that lunar eclipses revealed the future for their emperors. The ancient Chinese were frightened by the disappearance of the sun in a solar eclipse and the moon during lunar eclipses. They believed a dragon attacked and devoured the celestial bodies. In order to chase the dragon or other celestial creatures away, they often made loud noises and banged on drums until the moon or sun returned.

How to See Lunar Eclipses

Lunar eclipses can be observed during a full moon phase when the moon, sun, and Earth are aligned (Figure 1). Lunar eclipses are predictable due to the moon's cyclic nature, and there are many sources on the internet to determine when the next lunar eclipse will occur.

Eclipses are when an observer can see the light of one celestial object become obscured from another celestial object passing by. There are 2 types of eclipses that can occur which are a solar eclipse and a lunar eclipse. During a solar eclipse, the moon passes in front of the sun temporarily blocking the light. During a lunar eclipse, the moon becomes darkened as it passes through Earth's shadow. Lunar eclipses only occur during full moons as they have been observed by ancient Inca, Mesopotamian, and Chinese civilizations. There are two parts to Earth's shadow that are involved known as the umbra and penumbra.

What are the 4 types of lunar eclipses?

How often does a lunar eclipse occur?

What is a simple description of a lunar eclipse?

A lunar eclipse is when a full moon becomes darkened from it moving through Earth's shadow. The position of Earth is directly between the moon and the sun which results in the lunar eclipse.

What Is a Solar Eclipse?

Types of Eclipses | What is an Eclipse?

What is a Lunar Eclipse? | Models, Examples, and Frequency

What is a Solar Eclipse? - Definition & Overview

Differences of the Northern and Southern Hemispheres Lesson for Kids

Interactions in the Sun-Earth-Moon System