Blood flow starts from the right side of the heart, where it then goes to the lungs to become oxygenated. Blood returns back to the left side of the heart and is pumped through the arteries out to the body. The arteries become more narrow as they turn into arterioles and eventually capillaries. Capillaries are the smallest blood vessels of the circulatory system and are responsible for gas and nutrient exchange. The walls of capillaries are only a single cell layer thick and thus, allow for this exchange. Capillaries condense into larger vessels called veins, which bring blood back to the heart to start the process again. 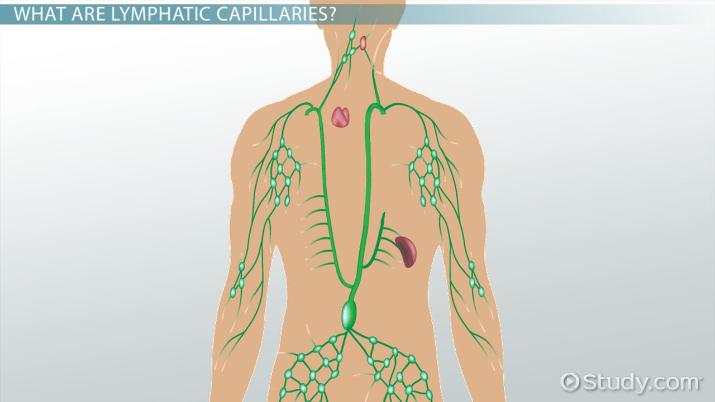 Coming up next: Systole: Definition & Measurement

What are Lymphatic Capillaries?

Where Do All Lymphatic Vessels End?

As lymph flows through the lymphatic vessels back to the heart, it also travels through lymph nodes. Lymph nodes are small, bean-shaped organs that exist throughout the lymphatic system. They have a high number of immune cells and filter the lymph, looking for pathogens, such as bacteria, or other harmful agents, like cancer cells.

Lymphatic capillaries transport interstitial fluid to the larger lymphatic vessels, where it becomes lymph fluid. The lymph fluid flows through lymph nodes, which scan the lymph for pathogens, such as bacteria, and cancer cells or other harmful agents prior to returning it to the heart. Lymph is moved through the lymphatic vessels by movement of the skeletal muscles and the chest cavity during breathing.

What's the difference between lymphatic capillaries and blood capillaries?

What best describes the lymphatic capillaries?

Lymphatic capillaries are tiny vessels that are needed to take up excess interstitial fluid. They pool into larger lymphatic vessels that deliver the fluid back to the heart.

What is the function of lymphatic capillaries in capillary beds?

The function of lymphatic capillaries in capillary beds is to collect fluid that has leaked from blood vessels and return it to the heart. This fluid is called interstitial fluid.

What do lymphatic capillaries absorb?

How to Perform a Visual Assessment in Massage Therapy

Motor Unit Summation | What is a Temporal Summation?