Copyright
Sasha Blakeley, Patricia Vineski
Explore the protagonist in Macbeth--learn who Macbeth is, identify Macbeth's character traits, and what he does in the play. Then, read an in-depth Macbeth character analysis. Updated: 11/27/2021

Macbeth is the titular character and protagonist in Macbeth by William Shakespeare. Macbeth goes through several profound character changes over the course of the play. When the play begins, Macbeth is thane of Glamis, which is equivalent to being a lord of an area of Scotland. After he encounters three witches who make prophecies about his future, Macbeth starts to become much more ambitious and power-hungry. Ultimately, the play is about how Macbeth changes, transforming from a genuine hero to a tragic hero over the course of the story.

There are many Macbeth characters who all come together to create the terrible situation that leads to Macbeth's downfall. They all have their specific roles in the story and their own relationships to Macbeth. Engaging in Macbeth's character analysis requires looking at all of the other characters in the play as a whole. The following are brief Macbeth character descriptions of the most important figures in the play: 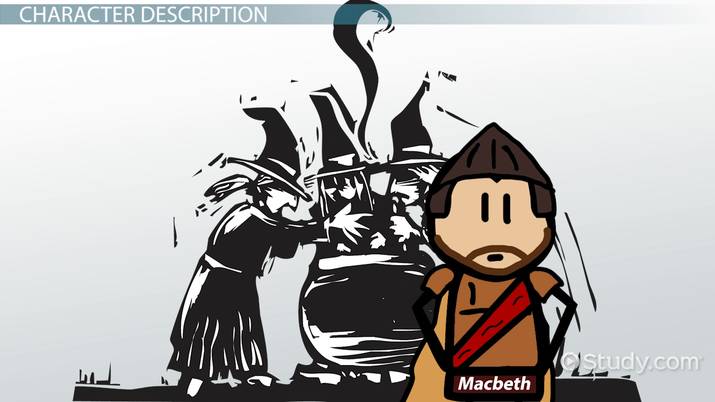 Coming up next: Figurative Language in Romeo and Juliet: Overview & Examples

Any Macbeth description that tries to parse all of Macbeth's character traits will by necessity result in contradiction. Macbeth changes so dramatically throughout the play, and his motivations are so multifaceted, that he embodies many traits as well as their opposites. Macbeth is a brave warrior with a kind heart. He cares about his friends and wants to do the right thing. He is also a power-hungry tyrant who will stop at nothing to expand and maintain his control. He is tempted into his wickedness by his desire for power, the witches' prophecies, and especially by the urging of his wife. He often doubts himself, but he also acts decisively and often violently when he needs to. All of these traits together are what allow him to become a tragic hero.

What is Macbeth's Journey in the Play?

Perhaps no Shakespeare character changes as dramatically in a single play as Macbeth does in his quest for power. His journey, when broken down to its simplest form, goes from brave warrior to reluctant murderer to king to brutal killer to and finally back to brave warrior. The play begins shortly after Macbeth and Banquo have fought bravely in battle, positioning Macbeth as a heroic character. This heroic portrayal begins to change when Macbeth first meets the three witches.

Macbeth meets three witches who tell him that while he is currently Thane of Glamis, he will soon also be Thane of Cawdor and king of Scotland. Banquo is told that his descendants will be kings. When Macbeth returns home, he learns that the Thane of Cawdor has died and that he has inherited the title. This gives him faith that the rest of the prophecy is also true. Lady Macbeth feels even more strongly about Macbeth's future as Scotland's king, and she pushes him to kill King Duncan so that he can take the throne.

Macbeth is very reluctant to kill Duncan, but he eventually agrees. He stabs Duncan with a dagger and then blames the action on Duncan's servants. Following his murder of Duncan, Macbeth is then crowned king. Almost immediately, Macbeth starts to feel more and more paranoid and guilty about his actions. Because he grows concerned about the prophecy of Banquo's descendants becoming kings, he tries to have Banquo and his son Fleance killed. The murderers he hires do kill Banquo, but Fleance manages to escape, compounding Macbeth's paranoia. Macbeth's guilt over his friend's murder causes him to see Banquo's ghost during a dinner with other nobles, causing him to say dangerous things in front of his guests while Lady Macbeth tries to keep him under control and explain away his strange behavior.

The people of Scotland start to have serious doubts about Macbeth's tyrannical rule. Worried about what his future might hold, Macbeth returns to the witches to hear more prophecies. They tell him to beware Macduff, but they also say that no man born of woman can harm him, which makes Macbeth believe that he is invincible. The final prophecy that the witches give Macbeth is that no harm will come to him until Birnam Wood, a large forest, comes to Dunsinane Castle, where Macbeth lives. He feels reassured by these last two prophecies, but, when he learns that Macduff has fled to England to join Malcolm's army in an attempt to end Macbeth's rule, he has Macduff's family killed.

Prince Malcolm, son of the late King Duncan, raises an army to destroy Macbeth and regain his throne. While Macbeth has grown more confident in his ability to hold power, Lady Macbeth is consumed by guilt. She commits suicide because she is no longer able to bear the weight of the crimes she and her husband have committed. Macbeth learns that the soldiers coming to attack him are carrying tree branches from Birnam Wood to obscure their numbers. He is horrified but has no choice but to fight bravely. Macduff, who wants to avenge the deaths of his family members, attacks Macbeth and kills him. It turns out that Macduff was born by what is now known as a Cesarean section rather than a natural birth, making him not ''of woman born'' and therefore able to kill Macbeth in accordance with the prophecy. Malcolm becomes Scotland's new king.

Macbeth is a particularly interesting character in the Shakespeare canon who has been the subject of rigorous character analysis for centuries. He is a character built on contradictions who responds in increasingly desperate and violent ways to the events that happen around him. He feels intensely guilty about his actions, but he is also unable to tamp down his ambition. He is not a villain like Iago in Othello or other outright villainous Shakespeare characters, but neither can he truly be said to be a hero. He is a complex character very much at war with himself. It would be fair to say that Macbeth is the kind of character who has a tragic flaw: his inability to control his own ambition and his willingness to perform great acts of violence ultimately cause his downfall.

Some of the quotes that Macbeth says over the course of the play clarify and describe his journey for the audience. The following quotes are in chronological order, showing how his mental state alters from the play's beginning to its end.

Macbeth is a character who lets external forces influence him too much, rather than standing by his own convictions in the face of difficult situations. He is driven to seek power by the prophecies and by his wife, rather than remaining true to his own beliefs and moral compass. Like all tragic heroes, Macbeth suffers because of his own actions.

Macbeth is the main character in the eponymous play by William Shakespeare. He begins the play as a hero and ends it as a tragic hero when he dies in battle. His tragic flaw throughout the play is his inability to hold true to his moral compass when presented with the opportunity for power. He kills everyone who gets in his way so that he can become king of Scotland, even when the people he has to kill are his close friends.

Macbeth's biggest influence throughout the story is his wife, Lady Macbeth. She pressures him into killing King Duncan, but eventually succumbs to her own guilt and paranoia. She kills herself near the end of the play. Ultimately, she is an important part of Macbeth's journey in which he goes from brave warrior to reluctant murderer to king to brutal killer, and finally back to brave warrior when he dies.

Is Macbeth a bad person?

Macbeth is a very complex person who does a lot of bad things. Whether or not he is a bad or irredeemable person is something for audience members to decide.

Who was Macbeth before he was king?

Before becoming king, Macbeth is the thane of Glamis. The title of ''thane'' in this context is a Scottish title similar to being the lord of a region.

What are Macbeth's character strengths?

Macbeth is very courageous and is willing and able to do what is necessary to achieve his goals. Sometimes, these strengths are good, while other times, they can be destructive.

Who killed Macbeth in the play?

Macduff kills Macbeth at the very end of the play. He cuts off Macbeth's head and brings it to the new King Malcolm.

Macbeth: Themes and Quotes from the Scottish Play

Macduff in Macbeth: Character Traits & Analysis | Who is Macduff?

Is Macbeth a Tragic Hero?

When Was Macbeth Written? - History & Author