Sophie Dresser, Shamekia Thomas
Read about Macduff from Shakespeare’s ''Macbeth.'' Analyze the actions of Macduff, learn his character traits, and examine how he serves as a foil to Macbeth. Updated: 01/18/2022

Who is Macduff? In William Shakespeare's Macbeth, MacDuff is the Thane of Fife, one of the noblemen of Scotland. He is loyal to King Duncan, and to Duncan's son, Malcolm. Macduff is the main antagonist of the play because he is aligned against Macbeth, the protagonist, and eventually kills him. However, Macduff is also one of the main heroes of the play; he proves himself to be honorable and loyal, whereas Macbeth grows increasingly bloodthirsty and greedy throughout the play. 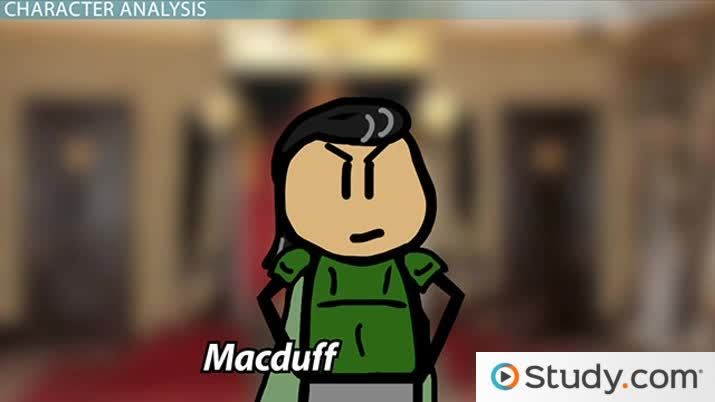 Coming up next: Malcolm in Macbeth: Traits, Character Analysis & Quotes

Macduff first appears as one of the retinue of noblemen who arrive at Macbeth's castle along with King Duncan. In Act 2, Scene 3, Macduff goes to wake King Duncan, not knowing that Macbeth has killed Duncan in the night, and is horrified to discover the King's dead body. ("O horror, horror, horror! Tongue nor heart/Cannot conceive nor name thee!") He informs the other noblemen, and Duncan's sons, Malcolm and Donalbain, but hesitates to tell Lady Macbeth, believing that the news of the King's murder is unfit for a "gentle lady" to hear. Shortly afterward, Duncan's sons, Donalbain and Malcolm, flee Scotland for Ireland and England, respectively, believing that suspicion for their father's murder will fall on them. (Many people interpret their flight as evidence of their guilt.) Macbeth is crowned King of Scotland, and Macduff returns to his castle and family in Fife.

In Act 3 Scene 4, Macbeth, growing increasingly power-hungry and fearful after murdering Duncan and ordering the murder of his former friend, Banquo, expresses suspicion of Macduff. In Act 3, Scene 6, the audience learns that Macduff has gone to England to help Duncan's son, Malcolm, raise an army against Macbeth. Macbeth's fear grows in Act 4, Scene 1, when he visits the witches who told him that he would be king, and they conjure an apparition which tells him "beware Macduff;/Beware the Thane of Fife." When he finds out that Macduff has gone to England, Macbeth resolves to kill Macduff's wife and children and "all unfortunate souls/That trace him in his line." In Act 4, Scene 2, Lady Macduff and her son are murdered by assassins sent by Macbeth.

In Act 4, Scene 3, Macduff and Malcolm are together in England. Malcolm questions why Macduff left his wife and children behind when he left Scotland (something that Macduff never manages to explain). Macduff expresses a desire to overthrow Macbeth and put Malcolm on the throne. Malcolm tests Macduff's loyalty by claiming to be greedy, and a womanizer; Macduff insists that he still wants Malcolm to rule in Scotland. Malcolm is then satisfied, sure of Macduff's loyalty. Lady Macduff's cousin, Ross, then arrives, and tells Macduff that his wife and children have been killed on Macbeth's orders. Macduff, grieving, swears revenge on Macbeth. At the end of the play, Macduff has his revenge against Macbeth; he kills Macbeth in battle, and Malcolm is crowned king of Scotland.

Throughout Macbeth, Macduff serves as a foil to Macbeth, his virtues providing a contrast with Macbeth's vices. When Macbeth murders King Duncan and throws suspicion on Duncan's sons so that he himself can be king, he demonstrates his disloyalty. However, even after becoming king, Macbeth is not satisfied; on the contrary, the more power he amasses, the more power-hungry and fearful he becomes. After he becomes king, he hires assassins to kill Banquo and his son, Fleance, because the witches who prophesied that Macbeth would be king, also said that Banquo's descendants would be kings, and Macbeth wishes to keep that from happening. (The assassins succeed at killing Banquo, but fail to kill Fleance). When the witches caution him to "beware Macduff," Macbeth immediately decides to kill Macduff. When he finds out that Macduff has gone to England, Macbeth has everyone in Macduff's castle killed, including his wife, children, and servants.

Unlike Macbeth, Macduff's loyalty to Duncan and his sons never wavers. Throughout the play, he is honest and loyal to Duncan's family, even insisting that he still wants Malcolm to be king when Malcolm claims to be greedy and a womanizer. (As it turns out Malcolm was testing Macduff's loyalty, and is neither greedy nor womanizer.) The one exception to Macduff's constancy and loyalty is when he leaves his wife and children behind when he goes to England to join Malcolm.

Macbeth's disloyalty and avarice are contrasted with Macduff's integrity and loyalty throughout the play. However, in regards to Macbeth vs Mcduff, one character trait that they have in common is courage. Throughout the play, Macbeth is shown to be courageous in battle. In fact, the play begins with King Duncan rewarding Macbeth for his courage in battle with the title and estate of the Thane of Cawdor (a title that had been stripped from one on King Duncan's enemies, who Macbeth and Banquo defeated in battle). At the end of the play, when Macduff challenges him on the battlefield, Macbeth feels sure of victory, because the witches informed him that "none of woman born/Shall harm Macbeth." (Act 4, Scene 1) However, even after Macduff reveals that he was "from his mother's womb/Untimely ripp'd" (Act 5, Scene 8) and is therefore not "of woman born," Macbeth still resolves to fight him, revealing himself to be as courageous in battle as Macduff.

Macduff, the Thane of Fife, is one of the heroes of Macbeth. After the murder of King Duncan, Macduff is one of the first characters to suspect that Macbeth is guilty of the act. Macduff flees Scotland for England and proves his courage and loyalty when he supports Duncan's son Malcolm's efforts to regain the throne of Scotland. When Macbeth has Macduff's entire family killed, Macduff swears revenge against him. Macduff's revenge comes to fruition at the end of the play, when he succeeds at killing Macbeth in battle and restoring Malcolm to the throne of Scotland.

Who is Macduff in relation to Duncan?

Macduff is a nobleman who is loyal to King Duncan. After Duncan's death, Macduff remains loyal to Duncan's son Malcolm.

How does Macduff kill Macbeth?

In Act 5, Scene 8 (the end of the play) Macduff kills Macbeth in battle. Macduff beheads Macbeth offstage, and returns to acknowledge Malcolm as the new king of Scotland.

Who is Macduff in the play Macbeth?

Macduff is the Thane of Fife, a Scottish nobleman. He remains loyal to King Duncan and his sons throughout the play, even after Macbeth becomes king of Scotland.

Why is Macduff an important character?

Macduff is an important character for many reasons. After Macbeth murders King Duncan, and frames Duncan's sons for the murder, Macduff is one of the first people to correctly suspect Macbeth's guilt. He joins Malcolm in England, planning to help Malcolm defeat Macbeth and take back the throne of Scotland. After Macbeth has Macduff's family killed, Macduff swears revenge, and at the end of the play, Macduff kills Macbeth in battle.

Banquo & Macbeth | How Does Macbeth Change Throughout the Play?

Macbeth: Themes and Quotes from the Scottish Play