Adam De Gree, Ashley Dugger
Learn about male vs. female prisons. Explore how many men vs. women are in prison and the differences in culture and services offered in male and female prisons. Updated: 07/29/2022

The United States has an exceptionally large prison population, incarcerating a greater proportion of its citizens than any other country. The vast majority of the nation's 2 million prisons and jails are for men. In federal prisons, about 93% of inmates are men, and at the state level, that rate is about 90%.

Research shows that this higher incarceration rate largely reflects the increased danger that men pose to society. For example, men account for over 75% of violent criminality in the United States. However, it also seems that the justice system favors women in significant ways. Men tend to receive markedly longer sentences for the same crimes as women. Moreover, men are twice as likely to be sent to prison if they are convicted as women are.

This lesson will look at some of the ways that male and female prisons differ.

How Many Men vs. Women are in Prison?

There is a significant "gender prison gap" at both the federal and state level. While over 1.1 million men are incarcerated in America today, something closer to 80,000 women are serving time. This means that there are roughly 13 men behind bars for every woman behind bars. 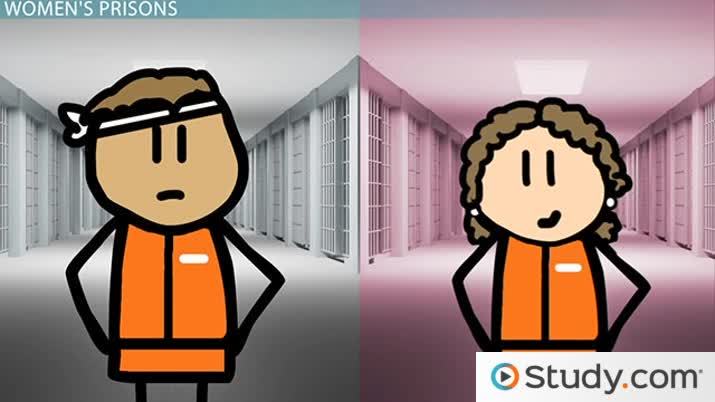 Try it now
Back
Coming up next: The Causes & Stages of Prison Riots

Both male and female inmates receive a wide array of services. In fact, the average cost of incarcerating someone in federal prison for one year well exceeds $40,000. Inmates receive religious services, education, life skills classes, mental health services, and drug and alcohol prevention services, to name just a handful.

Many women inmates are also mothers, so prisons offer a range of services specifically tailored to mothers behind bars. Some states even offer prison nurseries to ensure that babies and mothers are able to build healthy emotional bonds. Nursery programs teach mothers parenting and life skills and offer training in various life skills.

Prison culture refers to the customs, beliefs, social interactions, and values of inmates. It varies significantly in male and female prisons.

In order to protect themselves, male prisoners used to follow a prison code, which was based on loyalty. The code laid out the basic rules of prison life. For example, if someone ordered a good on the black market, they had to pay for it. Prison codes were fairly successful at maintaining order in America's prisons until the 1960s. If a prisoner broke the code, all their inmates found out and reacted by isolating the offender.

In that decade, crimes of all kinds spiked amidst a broad social upheaval. The prison population increased as well. Soon, detention facilities were crowded with new inmates. There were so many people in prison that it became impossible to track obedience to the prison code. Inmates could break the code without fear. As a result, the code required formal enforcement. That is why many male prisoners since started joining prison gangs. These gangs function as an internal government, as well as a business. Though it may sound strange, prison gangs help to reduce conflict.

Imagine arriving in a prison full of men who have been convicted of committing a violent crime. These men are forced to live together in close quarters for years, if not decades, at a time. It goes without saying that they have many opportunities to come into conflict with one another. Prison gangs offer inmates their protection in exchange for loyalty. If an inmate has the protection of a gang, it will be much more difficult to harm them than it otherwise would be. The gang makes it difficult to attack people on a whim by raising the cost of violence. It also enforces contracts. People in prison have just as many desires as people outside of prison. This creates a high demand for goods like cigarettes, cell phones, and drugs. Prison gangs are there to ensure that customers pay up.

Sexual activity occurs in both male and female prisons, but men do not often see it as an expression of romantic attachment. In female prisons, however, many inmates write love letters to one another even if there is no physical intercourse.

Female prisoners are much less likely to commit violence than their male counterparts. Thus, while prison gangs do exist in some women's prisons, they are not nearly as important. Instead, women form pseudofamilies. These families are often complete with grandparents, aunts, and cousins. They provide female inmates with the emotional and physical support they need and frequently feature jealousy and role-playing.

Research shows that women inmates suffer more from the elimination of interpersonal contact with family and friends than their male counterparts. They are more likely to contract mental illnesses in prison, and far more likely to attempt suicide as well. While women's prisons also have black markets for goods, they do not evince the same level of sophistication and violence as men's prisons.

Men and women differ substantially, and some of these differences are evident in male and female prisons. For example, male prisoners are both more likely to have been incarcerated for a violent crime, and more likely to commit a violent act in prison, than are women inmates. The differences in customs, beliefs, and values by gender make up two entirely distinct prison cultures.

Women are more likely to develop mental illnesses and even attempt suicide in jail. They form extensive pseudofamilies to provide protection, economic, and emotional support. Meanwhile, men are more likely to form prison gangs that enforce the prison code, operate on the black market, and keep the peace by threatening an escalation of violence.

Are there more male or female prisons?

There are far more male prisons than female prisons. Men make up well over 90% of all inmates in the United States.

How are women's prisons different from men's?

Women prisoners are much less likely to be violent. They form pseudofamilies for emotional support, while men more often form prison gangs.