Matter can exist as a pure substance like an element, such as hydrogen gas, a compound, such as water made of hydrogen and oxygen, or in a mixture where two or more substances are combined, but not interacting in a chemical process, such as ocean water. Ocean water is a mixture (solution) of sodium chloride and water existing together, but not chemically reacting.

Physical properties can include:

Matter will sometimes undergo physical changes. This happens when a particular type of matter changes state from solid to liquid, liquid to gas, gas to liquid, liquid to solid, or even solid to gas. These phase changes, known as melting, freezing, vaporization, condensation, and sublimation, have no affect on the chemical composition of the substance, therefore, they are not chemical changes. Phase changes, or changes of state, occur when energy is added to or taken from the substance. For example, an ice cube left on a counter will absorb heat energy from its surroundings and eventually melt to become liquid water. In both the solid state and liquid state, it is still water. No chemical reaction occurred to change the identity of the substance. However, sometimes the physical properties change during a phase change. An ice cube may have a square shape, but when it melts to become a puddle of liquid water, it most definitely takes a different shape. Both shapes are still water.

Chemical properties of matter can include:

When matter undergoes a chemical change, the chemical properties of the original substance determine how the change will proceed. The atoms of the matter are rearranged with other matter, changing the chemical composition of the original substance. The atoms are still there, just in a new combination. This then changes all the properties to fit the newly created matter. For instance, copper is highly reactive with oxygen in the presence of water or water vapor. Copper goes though a chemical process, called oxidation, that changes the copper metal to copper oxide. It is this change that makes the Statue of Liberty have it's characteristic green color. 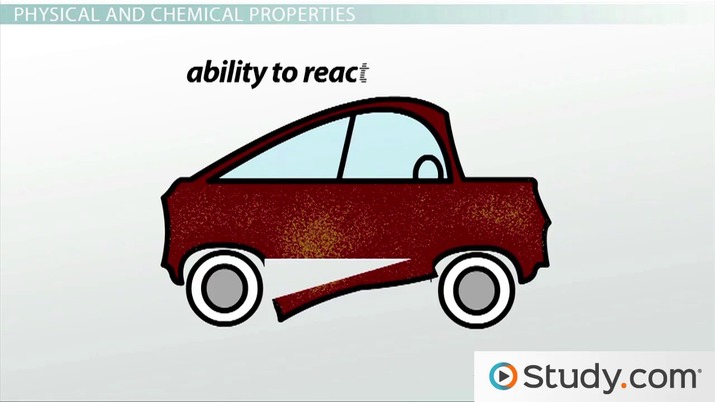 Coming up next: States of Matter and Chemical Versus Physical Changes to Matter

Physical and Chemical Properties of Matter

The physical and chemical properties of matter depend solely on the type of matter in question. Matter is defined as anything that has mass and takes takes up space. Matter can be living or non-living. It can be organic (containing carbon) or inorganic (no carbon present). Basically everything is matter; from the tiniest insect to the largest tree. Humans, animals, cars, houses, grass, and food are all types of matter in every day life.

Is Color a Physical or Chemical Property?

Is color a physical or chemical property? Color is an observable characteristic of matter, therefore, color is a physical property, not a chemical property. Color is observed as the portion of the visible electromagnetic spectrum that is reflected by the substance. If an apple is red, it is because the matter that makes up the apple absorbs all visible colors except red. That makes it appear red to the person observing it. The grass is green because the green wavelengths are reflected and not absorbed.

Is Density a Chemical Property?

Is density a chemical property? Density is not a chemical property; it is a physical property that can be measured and observed. The density of a substance at a given phase will not change no matter how much or how little there is in a sample. The only time density will/can change is when a change of state occurs.

Density generally decreases as substance melts then vaporizes. The solid phase of a substance tends to be more dense than the liquid phase. Likewise, the liquid phase tends to be more dense than the gas phase. This is because the particles in a solid are more orderly and fixed in position than a liquid or a gas. Liquids have some freedom to flow past each other and gases have the freedom to move wherever they want. Therefore, the solid, with its fixed structure packs more mass into a given volume than a liquid or a solid.

One exception to this rule is water. When liquid water freezes, it's v-shaped molecules trap air between them as they settle into their fixed position. The trapped air actually decreases the density of the ice, compared to the liquid form of water. Water reaches it's maximum density at 4 degrees C, but actually freezes solid at 0 degrees C.

Is pH a Chemical Property?

The pH scale runs from 0-14. Matter with a pH of 7, like pure water is considered to be neutral. Anything that has a pH of 0 up to 7 is acidic and anything above 7 and up to 14 is basic.

Stomach acid is a strong acid at a pH of about 2. Soaps and detergents are more basic with pH's around 8, depending on the product.

Is Reactivity a Physical or Chemical Property?

Sodium metal is highly reactive with water. When they come into contact with each other, the chemical response is swift and violent, causing a reaction to occur. Hydrogen gas and oxygen gas will combine under the right conditions to form water.

There are five types of chemical reactions that can occur, depending on what types of matter come into contact:

Is Corrosion a Physical or Chemical Property?

Is corrosion a physical or chemical property? Corrosion occurs when oxygen reacts with the surface atoms of a metal, destroying the integrity of the metal matter. This means corrosion is not a physical property, but is a chemical property because there is an interaction between two substances in which change occurs on a molecular level. Rusting steel is a common example of corrosion. Salt water destroying bridge supports is another common example. Corrosion can cause large amounts of damage to materials used in infrastructure, such as power line supports and transportation.

Is Mass a Physical or Chemical Property?

Why is density not a chemical property?

Density is not a chemical property, it is a physical property. Density is the measure of the mass of a substance divided by its volume. It is a measurable property that does not change the identity of the substance when determining it.

What are examples of physical properties?

What are examples of chemical properties?

Chemistry 111L: Chemistry I with Lab