Copyright
Danielle Wilson, Chad Sorrells
What are the measures of central tendency? Learn how to find the mean, median, mode and range in a data set, how each is used in math and view examples. Updated: 06/21/2021

What are the Measures of Central Tendency?

"Measures of Central Tendency" is one of the most important concepts in the study of descriptive statistics, a type of statistics used to describe and summarize values in a data set. Measures of central tendency do not provide information about the individual values of a data set. Rather, it is a set of numerical values that best represent or summarize the middle of the data set. The following measures can be used to determine the central tendency: 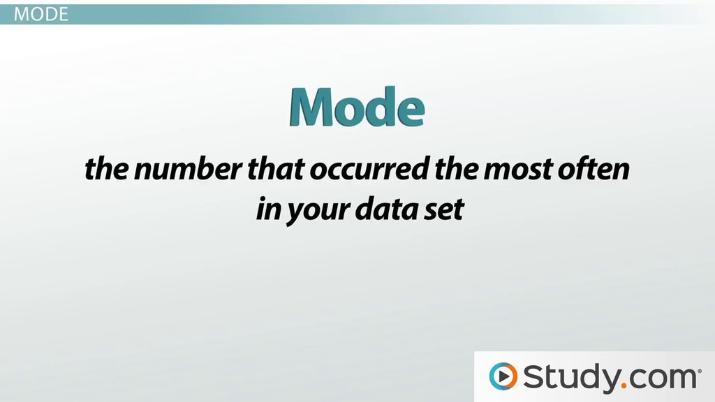 Coming up next: Calculating the Standard Deviation

What are Mean, Median, Mode, and Range Used for?

The mean does not always provide the best measure of central tendency for a data set. When the data is in a symmetrical distribution, or bell-curve, the mean, median, and mode are all at the center of the distribution. If a data set contains outliers, or values that are significantly higher or lower than the rest of the values in the data set, it can look skewed when represented on a graph. A skewed distribution is when the tail of a distribution on a graph is longer than the other. If the tail is longer towards the negative side of a number line, it is left-skewed. If the tail is longer on the positive side of a number line, it is right-skewed. The more a distribution is skewed, either right or left, the less accurate the mean.

The mode provides the value that occurs most frequently within a data set. The mode is frequently used with data sets that include categorical data, or data that can be organized into groups, but does not have mathematical meaning. Zip codes and phone numbers are types of numerical data that do not have a mathematical meaning because they do not indicate trends in a data set. Mode is useful for finding the most popular option in a categorical data set like the most favorite color.

Range is a numerical value that represents the spread of a data set. The range can be misleading if there are extreme outliers in the data set.

How to Find the Mean

In mathematics, finding the mean is synonymous with finding the average of a set of numbers.

To calculate the mean:

How to Find the Median

There are two ways to find the median of a data set. The correct method depends on the number of values within the set.

If the data set has an odd quantity of numbers in the set:

If the data set has an even quantity of numbers in the set:

How to Find the Mode

The mode is the number that occurs the most in the data set. The mode may not be a unique value if no single number was repeated more than others.

How to Find the Range

The range is the numerical difference between the maximum and minimum.

The following is an example of how the mean, median, mode, and range can all be drawn from the same data set.

To find the mean of the American Tiger University roster, or "data set,":

The average age of a member on the swim team is approximately 21.81.

To find the median of the data set:

21 is the single number directly in the center, and the median of the swim team is therefore 21.

Jordan is eighteen years old and freshman who's just joined the American Tiger University swim team, and the roster has changed. Now the second method for finding the median is necessary. Now to find the median:

3. To find a single value for the median, calculate the average of these two values. The median age of a member on the swim team is 21 years old.

The value (age) 19 occurs four times and most often in the data set. The most common age of the team members is 19 years. The mode is therefore 19.

The Best Measure of Central Tendency

This distribution is slightly skewed right and indicates that the mean is only slightly greater than the median. The mean is not heavily impacted by a possible outlier.

To find the range of the data set:

The range of ages of the members on the swim team is 9 years.

This lesson covers the following regarding how to find measures of central tendency:

This lesson has covered the following vocabulary words:

Is mean the same as average?

In mathematics the mean is considered to be the same thing as the average. Both are calculated by finding the sum of the total values in the set, then dividing that number by the number of values within the set.

What is range mode and mean?

Range is a measure of variability and represents the spread of the values in a data set. Mode is the number or value that occurs most often in the data set, or the most popular value. Mean is the average, or center of a normal distribution. The mean may not be as accurate in data sets with outliers or skewed distributions.

How do you find the mean median and mode?

How to Find the Unit Rate

The Progression of Geometric Thinking

What Is Range in Math? - Lesson for Kids

How to Multiply & Divide in Scientific Notation

How to Establish a Marketing Research Project