Joseph Comunale, Rachel Tustin
Learn about the mesosphere: the middle layer of the atmosphere. Discover characteristics of the mesosphere, including its temperature, density, and composition. Updated: 12/01/2021

What is the Mesosphere?

The Earth's atmosphere can be broken up into layers based on varying densities, temperatures, and atmospheric phenomenon that occur within them. From the outermost layer to the surface of Earth, the layers of the atmosphere are as follows: 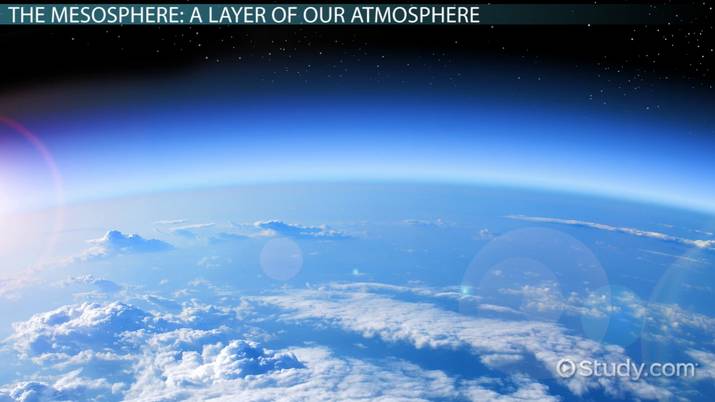 Where is the Mesosphere Located?

Generally, the entire atmosphere decreases in both density and pressure with an increase in altitude. This is due to the decrease in gravitational attraction of the atmosphere with distance from the Earth's center mass. Additionally, the temperature rapidly increases within the thermosphere, which increases that layer's thermal expansion and therefore decreases the density. The pressure of the mesosphere ranges from 0.122 Newtons per square meter to 0.99 Newtons per square meter. Mesosphere density ranges from 0.102 kilograms per cubic meter to 0.994 kilograms per cubic meter.

Generally, the Earth's atmosphere is composed of 78% nitrogen (N), 21% oxygen (O), 0.93% argon (Ar), 0.04% carbon dioxide ({eq}CO_2 {/eq}), and 0.03% of trace gases. This composition holds true throughout most of the atmosphere as the differentiation by molecular weight or mass does not occur, because the turbulence and circulation of the atmosphere keeps the composition relatively uniform or homogenous. However, meteors begin to burn up and ionize upon entering the mesosphere due to the sudden increase in atmospheric density transitioning from the thermosphere to the mesosphere. Meteors cause some metallic elements to be present within the mesosphere such as the following:

However, below 85 kilometers, the above elements form compounds within the mesosphere including oxides, hydroxides, and carbonates. These compounds polymerize or clump together into meteoric smoke particles (MSPs) nanometers in size. It is likely that MSPs act as condensation nuclei and form cloud condensation around them in the mesosphere. Gradually, MSPs sink and make their way to being deposited onto Earth's surface after approximately 4 years.

Meteorology in the Mesosphere

Besides the ionization and burning up of shooting stars or meteors within the Earth's mesosphere, there are other meteorological or atmospheric phenomena that also occur that make the mesosphere distinct from other layers of the atmosphere.

Within the mesosphere there are unique cloud formations called noctilucent clouds or polar mesospheric clouds.

Polar mesospheric clouds (PMCs), also called noctilucent clouds and "night-shining" clouds, are clouds that consist of ice crystals that form within the mesosphere and are the highest cloud formation within the entire atmosphere. These formations are only visible at astronomical twilight, when the Sun is hidden below the horizon. At this position, the noctilucent clouds are so high in the atmosphere that they are sunlit for a period of time while the Sun is below the horizon. The clouds are too thin and faint to be seen during full daylight.

Strange electrical phenomena also occur within the mesosphere such as sprites and ELVES.

ELVES is an acronym short for "Emissions of Light and Very Low Frequency Perturbations due to Electromagnetic Pulse Sources." This electrical phenomenon appears as a dim red glow within the mesosphere that can have a diameter of up to 400 kilometers in size.

The mesosphere is also the location of many atmospheric tides. Mainly within the mesosphere are strong zonal winds that run east to west. Additionally, there are atmospheric tides which occur because of the gravitational influence of the moon orbiting around Earth. The gravitational influence of the Sun, moon, and Earth cause tidal bulges to not only occur within Earth's oceans, but also within the atmosphere. Gravity waves are also generated by the displacement of Earth through its orbit around the Sun, and its wobble caused by the moon's orbit. This displacement of solid Earth causes fluid Earth (such as air and water) to be displaced in respect to solid Earth and therefore due to buoyancy, returns to equilibrium and results in waves. These waves propagate from the troposphere, through the stratosphere, and up into the mesosphere, where they dissipate due to the decrease in atmospheric density with altitude.

Instead of using these devices, meteorologists have to rely on sounding rockets which are suborbital research rockets. These rockets are launched into the mesosphere where they can maintain altitude and flight for a few minutes, during which measurements are taken by equipment attached to the rocket.

The mesosphere is the third, middle layer of Earth's atmosphere. The mesosphere is located approximately between 50 and 85 kilometers above Earth's surface. This region of the atmosphere is too thin for weather balloons to reach, and too thick for satellites to enter; therefore, scientists must use suborbital rockets to study and measure the mesosphere.

Why is the mesosphere cold?

What does the mesosphere contain?

The mesosphere has the same composition as the other layers of Earth's atmosphere. The composition of the atmosphere is generally 78% nitrogen (N), 21% oxygen (O), 0.93% argon (Ar), 0.04% carbon dioxide (CO_2), and 0.03% of trace gases. However, the mesosphere also contains meteoric smoke particles (MSPs) consisting of compounds that contain metallic elements such as the following:

What are the main characteristics of the mesosphere?

The main characteristics of the mesosphere that differentiate it from other layers of Earth's atmosphere are the following:

The mesosphere is the coldest layer of Earth's atmosphere.

Noctilucent clouds form high up in the mesosphere and are only visible at twilight.

Troposphere Characteristics & Temperature | What is the Troposphere?

Thermosphere Overview, Facts & Composition | What is the Thermosphere?

Ionosphere Location, Temperature & Layers | What is the Ionosphere?

What are Doldrums? | Doldrum Winds Location

Outer Core Composition, Temperature & Facts | What are the Characteristics of the Outer Core?