What are Metalloid Elements? 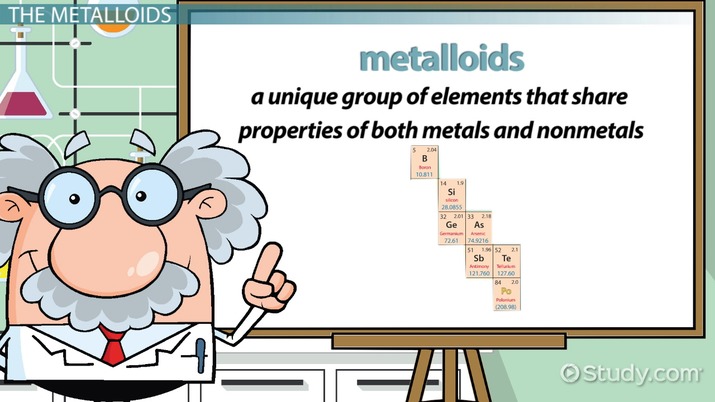 Location of Metalloids on the Periodic Table

The classifications of elements as metals, metalloids, or nonmetals are made on the basis of certain properties that are common to elements in each group.

Metalloids are defined as elements that have properties that are intermediate between the properties of nonmetals and metals. However, as seen by the ambiguity in the number of elements classified as metalloids, metalloid properties can have some variation between individual elements, which is why they are generally hard to characterize.

The physical properties of metalloid elements include:

The solid state of matter and metallic luster are characteristics that are also observed in most metal elements. However, metalloids are also brittle and semiconductors, which are considered properties similar to nonmetal elements. Hence, it can be seen that the physical properties of metalloids are a mix of characteristics of metals and nonmetals.

For example, with only 3 electrons in its valence shell, boron tends to act as an electron donor in chemical reactions. This makes its reactivity and electronegativity similar to that of metals. On the other hand, elements such as arsenic or antimony - i.e., elements with greater than four valence electrons - tend to accept electrons. This makes them more similar to nonmetal elements in their reactions and electronegativity. There are also two metalloid elements - silicon and germanium - which have exactly four valence electrons. These elements can act either as a metal (by giving up electrons) or nonmetal (by accepting electrons) depending on the other elements involved in the chemical reaction.

In general the ionization energies of metalloids lie between the metal and non-metal elements in their periods. They also react readily with halogens, such as chlorine and fluorine, and in mixtures with metals they form alloys.

Many metalloid elements are widely used for industrial and commercial applications. Some examples of metalloids and their uses include:

Metalloid elements are elements with properties of both metals and nonmetals. The elements classified as metalloids are - boron, silicon, germanium, arsenic, antimony, and tellurium (and sometimes bismuth, polonium, and astatine). These elements occur along a slanted line between Group 13 and Group 16/17/18 of the periodic table, separating the metal elements from the nonmetal elements.

Properties of metalloids vary between the elements, sharing some similarities with both metals and nonmetals. Physical properties shared by all metalloids include:

How many metalloids are on the periodic table?

There are six elements generally accepted to be metalloids. However, based on the classification criteria being used, the exact number may vary, ranging from six to nine elements.

What are 4 properties of metalloids?

The four major properties of metalloids are as follows:

- They have a metallic luster

What types of properties do metalloids display?

Where are the metalloids on the periodic table?

The metalloids are located along a slanted line between the metal elements and nonmetal elements of the periodic table. They span from Group 13 to Group 16, 17, or 18 based on what criteria of classifying metalloid elements is being used.

What is Polonium? - Facts & Uses in Everyday Life